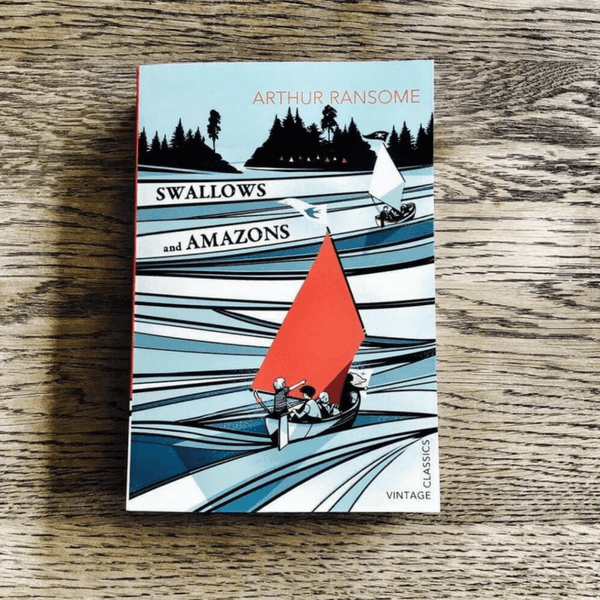 Having recently finished The Snow Child, which was based on a Russian Fairytale called Little Daughter of the Snow by Arthur Ransome, I decided to read Swallows and Amazons, one of Ransome’s best-loved books, and indeed perhaps his most famous, which came in at a respectable number 57 in the BBC’s Big Read.

First published in 1930, the book was inspired by a summer spent by Ransome teaching the children of his friends, to sail. It tells the story of two sets of children, the Walkers and the Blacketts, who spend their summer holidays camping out on an island near the Lake District.

The Walker children – John, Susan, Titty and Roger borrow a dinghy called Swallow which they sail out to the island, where they meet Nancy and Peggy Blackett, sailing a dinghy called Amazon. Between the six of them, soon known as the Swallows and Amazons, the children create a world of wild forests and robberies, of treasure and of treachery in which they team up against the Blackett’s Uncle who they refer to as Captain Flint. Ransome perfectly captures the  innocence and ease of carefree days and a time gone by when children were free to roam and the outdoors was one big adventure.

A nostalgic read that reminds me of long summer holidays during which imaginary worlds were created and open spaces were explored, Swallows and Amazons is the perfect embodiment and example of childhood adventure and the wonderment that comes with it. While it may have been first published over eighty years ago, Swallows and Amazons continues to transport its readers to a charming era through its evocative writing and it will no doubt remain a classic that captures both the hearts and imaginations of adults and children worldwide.

RELATED:  Review: The Elegance of the Hedgehog - Muriel Barbery

About Swallows and Amazons

The first title in Arthur Ransome’s classic series, originally published in 1930: for children, for grownups, for anyone captivated by the world of adventure and imagination. Swallows and Amazons introduces the lovable Walker family, the camp on Wild Cat island, the able-bodied catboat Swallow, and the two intrepid Amazons, Nancy and Peggy Blackett.

Arthur Michell Ransome was an English author and journalist. He is best known for writing the Swallows and Amazons series of children’s books about the school-holiday adventures of children, mostly in the Lake District and the Norfolk Broads.