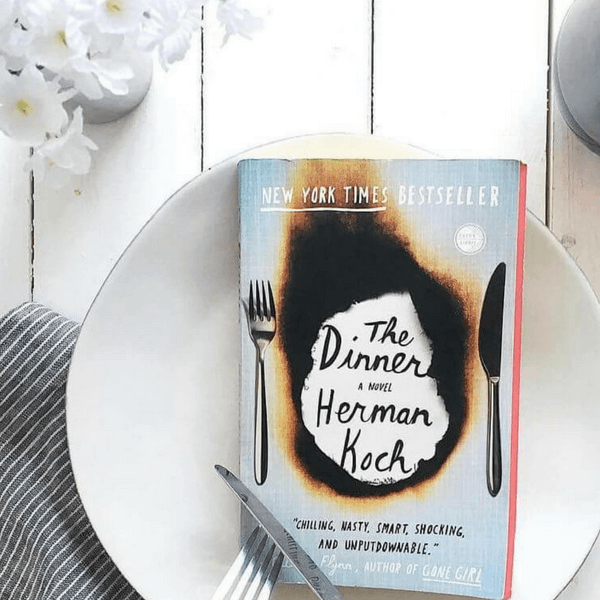 At the moment I have so many books on my To Be Read list, that I can barely keep track of how many of them got there in the first place. The Dinner is a prime example; none of my friends have read it and it’s on neither the Man Booker Prize shortlist nor the BBC Big Read – both of which I’m trying to read my way through – thus, I’m not sure exactly when or how I came across it.

Written by Dutch author Herman Koch and translated by Sam Garett, The Dinner or Het Dinner in Koch’s native Holland was published in August following huge success in Europe. Quite coincidentally yesterday was International Translations Day, which takes place on 30th September each year on the feast of St Jerome who is considered the Patron Saint of translators. Thus it was quite fitting that I read The Dinner on a day that celebrates translators and their work.

The first page is one of the most compelling I’ve read; and the narrative instantly draws in the reader. The Dinner starts off fairly light-heartedly, with the narrator Paul Lohman and his wife Claire on their way to dinner at a pretentious restaurant in Eastern Amsterdam with his brother, political candidate Serge Lohman and his wife Babette. However, while the tone remains humourous throughout the narrative, there is a dramatically disturbing element that soon surfaces and is the focal point of what is essentially a complex family drama.

As the novel progresses, the plot thickens and the suspense is tangible throughout. The reader gradually becomes aware of the wildly unreliable nature of the narrator, and thus becomes wary of what is fact and what is fiction.

Set against the backdrop of an imposing restaurant, with a cast of unsympathetic characters, The Dinner is a unique, compelling read. I don’t want to give away too much of what happens in Koch’s bestseller, but suffice to say it’s easy to see why it has sold over a million copies worldwide. A fast-paced thriller exploring themes of etiquette, violence and family complexities, this is a dark, thought-provoking novel that tests the moral boundaries of its readers and ends on a startling climax.

It’s a summer’s evening in Amsterdam, and two couples meet at a fashionable restaurant for dinner. Between mouthfuls of food and over the polite scrapings of cutlery, the conversation remains a gentle hum of polite discourse – the banality of work, the triviality of the holidays. But behind the empty words, terrible things need to be said, and with every forced smile and every new course, the knives are being sharpened.

Each couple has a fifteen-year-old son. The two boys are united by their accountability for a single horrific act; an act that has triggered a police investigation and shattered the comfortable, insulated worlds of their families. As the dinner reaches its culinary climax, the conversation finally touches on their children. As civility and friendship disintegrate, each couple show just how far they are prepared to go to protect those they love.

Tautly written, incredibly gripping, and told by an unforgettable narrator, The Dinner promises to be the topic of countless dinner party debates. Skewering everything from parenting values to pretentious menus to political convictions, this novel reveals the dark side of genteel society and asks what each of us would do in the face of unimaginable tragedy.

Herman Koch is a television producer and a writer. The book ‘Het diner’, published in 2009, was his breakthrough in the Netherlands. It was published in 17 countries. It was partly based on a true story involving a homeless woman named, María del Rosario Endrinal Petit, in Barcelona, in December 2005.

Koch was born in Arnhem, and later moved to Amsterdam. He studied Russian for some months, and lived in Finland for a while. Nowadays he is married to the Spanish Amalia, and has a son, Pablo