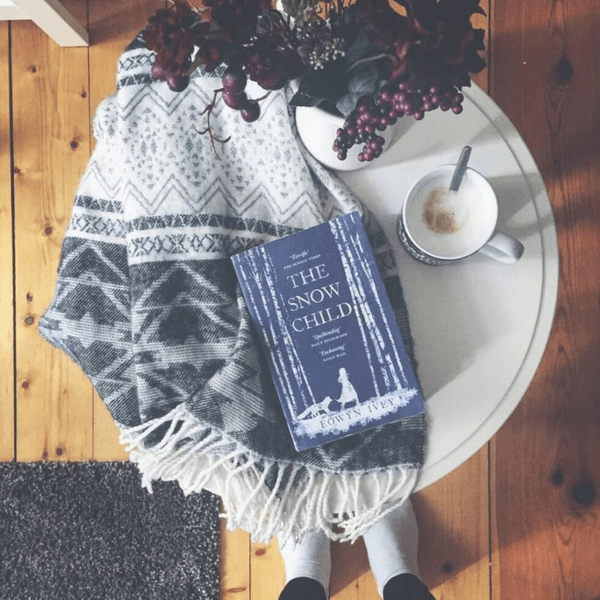 In the midst of trying to work my way through the BBC Big Read, I am also trying to keep abreast of current bestsellers, and with glowing reports of Eowyn Ivey’s debut novel The Snow Child having dominated much of my news feed on Twitter, I wanted to see what the fuss was about.

Set against a backdrop of raw Alaskan wilderness, The Snow Child tells the story of Jack and Mabel, a married couple who, hoping to flee the heartbreak of their still born child, decide to make a fresh start at a homestead in Alaska. However, money is tight and the winters are long and cold; thus their dream of starting afresh soon turns into a struggle against survival. And then one night, in the midst of a snowfall, Mabel decides to build a snow child, giving it mittens and a hat and while the next day it has melted, a trail of footprints into the forest remains.

What follows is the re-telling of a Russian fairy tale, Snegurochka, Little Daughter of the Snow by Arthur Ransome, and Ivey has expertly spun a novel that interlaces fantasy and reality with an atmospheric, evocative setting. Readers quickly become enchanted by Faina, a quasi-feral child who brings equal amounts of joy and sadness into their once barren lives as she flutters in and out of their home.

A thought-provoking, haunting tale, The Snow Child is delicately written with such prowess it’s hard to believe it’s Ivey’s first novel. With the cold, wild beauty of the Alaskan frontier as much of a character as Mabel and Jack, it makes for the perfect evening read as the British winter fast approaches.

About The Snow Child

Alaska, 1920: a brutal place to homestead, and especially tough for recent arrivals Jack and Mabel. Childless, they are drifting apart – he breaking under the weight of the work of the farm; she crumbling from loneliness and despair. In a moment of levity during the season’s first snowfall, they build a child out of snow. The next morning the snow child is gone – but they glimpse a young, blonde-haired girl running through the trees.

This little girl, who calls herself Faina, seems to be a child of the woods. She hunts with a red fox at her side, skims lightly across the snow, and somehow survives alone in the Alaskan wilderness. As Jack and Mabel struggle to understand this child who could have stepped from the pages of a fairy tale, they come to love her as their own daughter. But in this beautiful, violent place, things are rarely as they appear, and what they eventually learn about Faina will transform all of them.

Eowyn Ivey’s first novel, The Snow Child, was a finalist for the Pulitzer Prize in fiction and an international bestseller. Her newest novel To the Bright Edge of the World will be released August 2, 2016. Eowyn was raised in Alaska and continues to live there with her husband and two daughters.