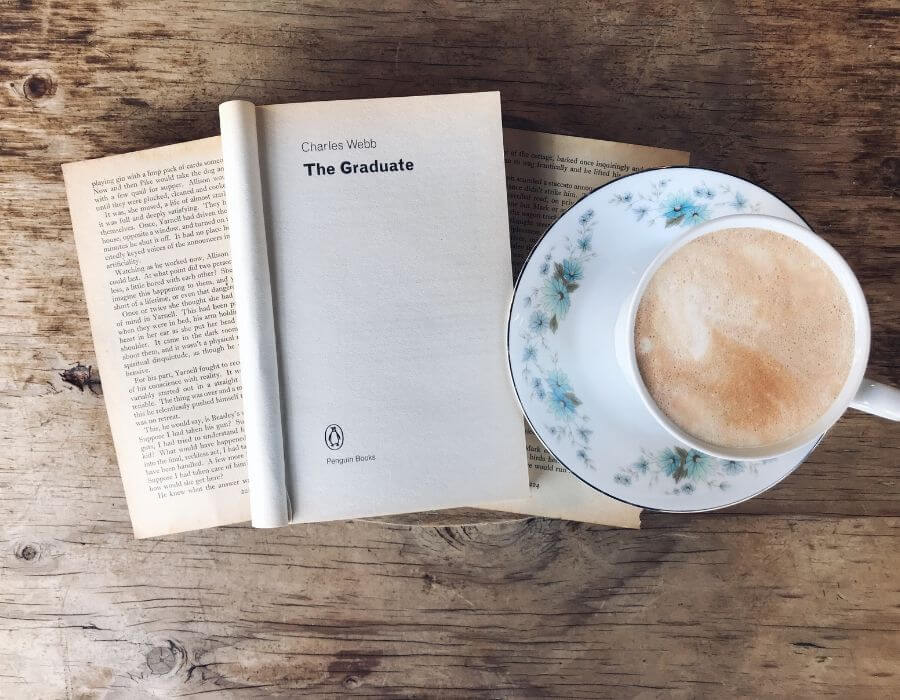 On a recent trip to Gertrude & Alice, while waiting in queue for my Monday-morning caffeine hit, a book in the bargain bin caught my eye. Entitled the 1001 Books to Read Before You Die, I swiftly bought it before settling in to an armchair, accompanied by a piping hot cup of tea. Despite having an ever-growing to-do list, my intention for a productive morning quickly went out the window when I began flicking through said book, pen in hand, to tally up the books I had read. An hour or so later, having gone back and forth through the ample pages of the book more times than I care to admit, I was somewhat aghast to discover I had read just 95 of the 1001-strong list. And so, both agitated by my lack of literary merit, and determined to make it to 100 before the month of July was out, I scoured the shelves of the bookshop to find unread books that had been featured on the list that I could read in a single sitting, and soon stumbled across The Graduate by Charles Webb.

While I had heard of the much-loved film, as someone who struggles with any sort of device that requires more than one remote control, it wasn’t one I had watched, and thus knew little about the premise of the book, other than the inclusion of central character Mrs Robinson.

A short but fast-paced tale, The Graduate tells the story of Benjamin Braddock, who, shortly after graduating from a small Eastern college moves home to live with his parents. With pressure mounting from both his parents and their well-meaning friends to map out his foreseeable future, the neurotic protagonist soon starts an affair with the wife of his father’s business partner in the wake of a family party.

Full of dry humour, witty prose and an increasingly frantic main character, The Graduate is a pacy, plot-driven novella that’s almost impossible to put down. Shortly after Braddock’s affair with Mrs Robinson begins, her husband – unaware of the illicit relations that are taking place behind closed doors – encourages him to take their daughter Elaine on a date, and calamity quickly ensues, when Braddock decides he wants to marry her.

Rich with wonderfully flawed characters, anxiety-filled prose and a protagonist who is as awkward as he is innocent, The Graduate is a both an alluring and entertaining read that offers a wonderful insight into the mind of an angst-ridden teenager trying to find his feet in life – and failing somewhat catastrophically.

When Benjamin Braddock graduates from a small Eastern college and moves home to his parents’ house, everyone wants to know what he’s going to do with his life. Embittered by the emptiness of his college education and indifferent to his grim prospects—grad school? a career in plastics?—Benjamin falls haplessly into an affair with Mrs. Robinson, the relentlessly seductive wife of his father’s business partner. It’s only when beautiful coed Elaine Robinson comes home to visit her parents that Benjamin, now smitten, thinks he might have found some kind of direction in his life. Unfortunately for Benjamin, Mrs. Robinson plays the role of protective mother as well as she does the one of mistress. A wondrously fierce and absurd battle of wills ensues, with love and idealism triumphing over the forces of corruption and conformity.

Charles Webb (born in San Francisco, California) is the author of several novels, mainly known for his most famous work, The Graduate. The novel was eventually made into an enormously successful film.

Charles Webb (born in San Francisco, California) is the author of several novels, mainly known for his most famous work, The Graduate. The novel was eventually made into an enormously successful film.