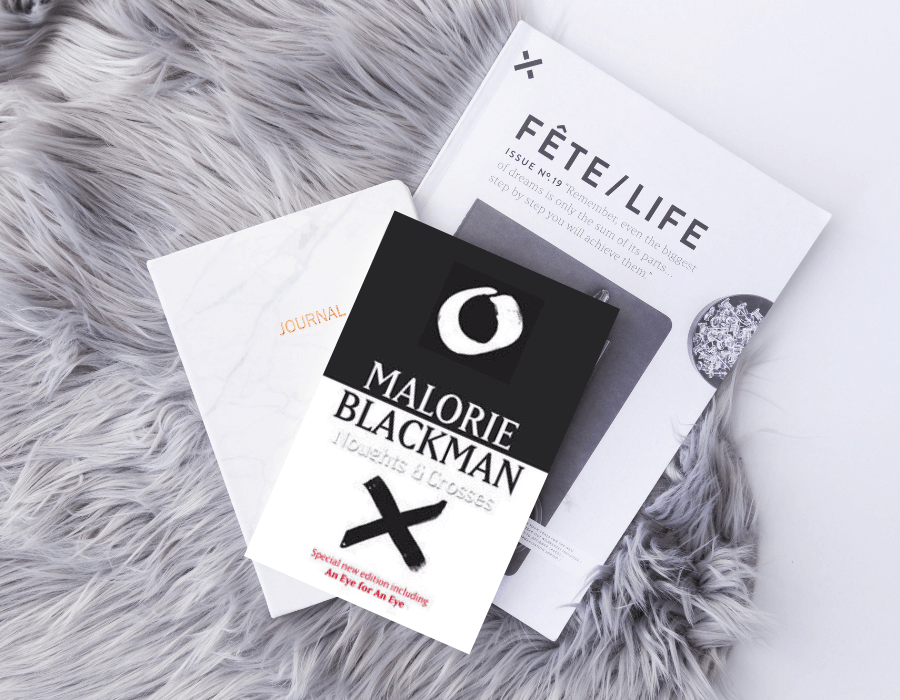 One of my main reasons; indeed, the prime reason I set myself the challenge to read the BBC Top 100 reads before my thirtieth birthday, was to read beyond the bounds I previously confined myself to. Despite having been an avid and voracious reader since I was a little girl, I had self-imposed restrictions regarding which genres, authors, and book covers I thought I enjoyed. And while at numerous times throughout the challenge working my way through such an extensive list of books was a long and laborious task, ultimately it was worth the slog. Noughts and Crosses by Malorie Blackman is certainly one of many books from the hundred-strong list that I wouldn’t have read were it not for my challenge, and, like many others that were voted as one of the nations best loved books, it opened my eyes to a wider sphere of literature.

It was while I was perusing the shelves of my local Waterstones in search of the second Harry Potter book that I happened across Noughts & Crosses by Malorie Blackman, and immediately recognised it as one of the titles from the BBC’s Big Read. I later found it at a charity shop on Northcote Road and bought it with the hope of ticking it off my list by the end of the year. Having finished The Secret Keeper, I soon began Noughts & Crosses, but due to a rather busy few weeks it took me longer than I had anticipated to finish it. Read on for my Noughts and Crosses book review…

Not dissimilar to Romeo and Juliet, Noughts & Crosses’ plot explores themes of racism, prejudice and politics and is narrated by the two main characters Sephy, a Cross, and Callum, a Nought. Having been friends since childhood, as they both grow older it soon becomes clear that living in a segregated society, in which dark-skinned Sephy is of the ruling class, compared to colourless Callum who belongs to the underclass, will not only effect their friendship but also lead to a heartbreaking climax for them both. But while the pair are both battling the racial and class politics that are part and parcel of the society on which they live, they too are fighting battles within themselves. Callum wants to make something of himself. He believes he is capable of more than what is expected of both him and the Crosses as a whole. He’s angered and insulted by the Cross government’s attempt at integration. He is desperate for equality but struggles to achieve what feels so very far out of reach. He too is angry at himself for loving Sephy – a member of the people who oppress him and the daughter of a man who is instrumental in the mistreatment of his kind. To love Sephy means to to love the source of all his pain, hatred, anger, and yet, despite her privileged position in society, Sephy is filled with shame at being a cross.

Turning racial prejudice on its head with a thought-provoking narrative for both teenagers and adults alike, Noughts and Crosses ending is powerful and poignant, and challenges the preconceived ideas that we have of society.

Buy Noughts and Crosses from Waterstones, Amazon, Amazon AU or download it on Audible.

Two young people are forced to make a stand in this thought-provoking look at racism and prejudice in an alternate society.

Sephy is a Cross — a member of the dark-skinned ruling class. Callum is a Nought — a “colourless” member of the underclass who were once slaves to the Crosses. The two have been friends since early childhood, but that’s as far as it can go. In their world, Noughts and Crosses simply don’t mix. Against a background of prejudice and distrust, intensely highlighted by violent terrorist activity, a romance builds between Sephy and Callum — a romance that is to lead both of them into terrible danger. Can they possibly find a way to be together?

This is a great Noughts and Crosses review from The Guardian.

Malorie Blackman has written over fifty books and is acknowledged as one of today’s most imaginative and convincing writers for young readers. She has been awarded numerous prizes for her work, including the Red House Children’s Book Award and the Fantastic Fiction Award. Malorie has also been shortlisted for the Carnegie Medal. In 2005 she was honoured with the Eleanor Farjeon Award in recognition of her contribution to children’s books, and in 2008 she received an OBE for her services to children’s literature. She has been described by The Times as ‘a national treasure’.

Malorie was the Children’s Laureate between 2013–15.

This post contains affiliate links, which means I receive a small commission, at no extra cost to you, if you make a purchase using this link.