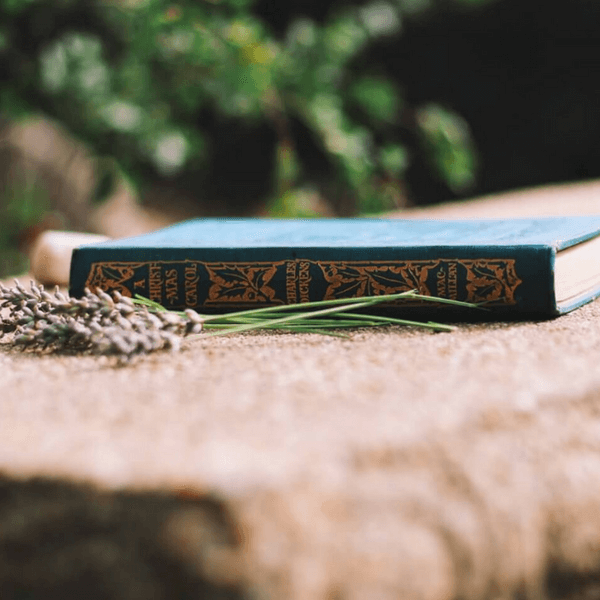 At the beginning of December I went with my mum and my step-dad to watch Simon Callow in Charles Dicken’s A Christmas Carol. It is a one-man production that I saw last year with my friend Beth, and consequently decided to make it a festive tradition. I was lucky enough to meet Simon Callow afterwards when I was enjoying a mince pie and a glass of mulled wine in the theatre’s bar and speaking to the man in possession of perhaps the most marvellous voice in the country was certainly one of the highlights of my year.

And as a token Christmas present, my mother bought me a beautiful hard-back edition of A Christmas Carol to remind me of our trip to the theatre. Most people will know the story well, it having been propelled into mainstream culture by the Muppet’s Christmas Carol, and despite having struggled with much of Dickens’ other work, A Christmas Carol is a truly beautiful story.

First published on 19th December 1843, A Christmas Carol tells the story of Ebeneezer Scrooge,  a miserly and miserable old man about to spend another Christmas alone. Intolerant of compassion, charity or kindness Scrooge dismisses the offer of his nephew Fred’s dinner invitation and refuses to contribute to a collection for the poor. Indeed, his only Christmas gift is allowing his overworked employee Bob Cratchit Christmas day off, though this is only on the condition that he returns to work first thing on Boxing Day.

A timeless, cautionary tale just as relevant in the 21st century as it was in the 19th, A Christmas Carol is a heart-warming story perfect for this time of year.

And here’s hoping that everyone has a very merry Christmas, wherever you may be!

About A Christmas Carol

“I am the Ghost of Christmas Present,” said the Spirit. “Look upon me!”

The holiday season brings the chance to give, and what better gift is there than one of the most beloved stories in the English language? This year, we at Atria Books are offering a free ebook edition of Charles Dickens’ A Christmas Carol, the perfect companion for a cozy night by the fire.

Since its publication in 1843, A Christmas Carol and the miserly Ebenezer Scrooge have become literary classics. Illuminated with practical scholarship and questions for discussion, this edition makes a charming package that includes the facts behind the fiction, as well as the pure joy and magic of this timeless tale about the true meaning of Christmas.

Charles John Huffam Dickens (7 February 1812 – 9 June 1870) was an English writer and social critic. He created some of the world’s best-known fictional characters and is regarded as the greatest novelist of the Victorian era. His works enjoyed unprecedented popularity during his lifetime, and by the twentieth century critics and scholars had recognised him as a literary genius. His novels and short stories enjoy lasting popularity.