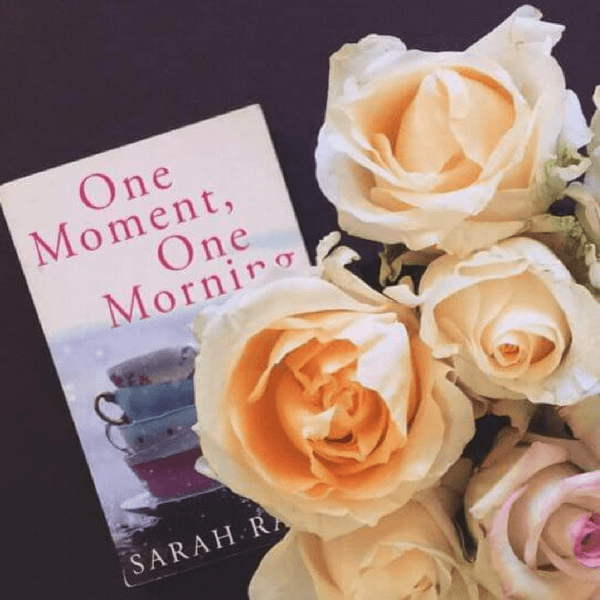 After spending three food and fizz filled days with my family in Yorkshire for Christmas, I had a rather long train journey home to London. Having finished my book en route to Yorkshire, and unwilling to begin a heavy classic from my Uncle’s huge hoard of books, I borrowed One Moment, One Morning from my cousin.

The debut novel from Brighton based author Sarah Rayner, One Moment, One Morning begins on the 7.44 train from Brighton to London. On the journey a man dies of a sudden heart attack, changing three women’s lives forever.

Rather ironically, I used to get the 7.44 from Brighton to London after graduating from university when I was interning in London. I now live in Clapham Junction which is also mentioned in the book, and until recently worked around the corner from Cheyne Walk in Chelsea where one of the main characters Anna, works as copywriter. Thus, in addition to the settings which Rayner expertly describes herself, I was able to visualise, perhaps better than most, a vivid backdrop to the story which sees the lives of Karen, Anna and Lou intertwine as the plot develops.

After Karen is left widowed following her husband Simon’s heart attack, she turns to best friend Anna, who herself is dealing with an unhappy relationship with her spouse whose fondness for alcohol is proving too much to bear. She, in turn, seeks solace from Lou, who witnessed Simon’s heart attack and soon becomes a firm friend.

As the three women struggle to overcome feelings of shock, grief and loss, while simultaneously dealing with lesser problems in their lives, the friendship between the three of them is cemented.

RELATED:  Review: How to be a Good Wife - Emma Chapman

A deceptively simple tale that takes place over just seven days, One Moment, One Morning is a well written tale with a captivating plot that you will want to devour in one sitting.

About One Moment One Morning

The Brighton to London line. The 07:44 train. Carriages packed with commuters. A woman applies her make-up. Another occupies her time observing the people around her. A husband and wife share an affectionate gesture. Further along, a woman flicks through a glossy magazine. Then, abruptly, everything changes: a man has a heart attack, and can’t be resuscitated; the train is stopped, an ambulance called. For at least three passengers on the 07:44 on that particular morning, life will never be the same again. Lou witnesses the man’s final moments. Anna and Lou share a cab when they realise the train is going nowhere fast. Anna is Karen’s best friend. And Karen? Karen’s husband is the man who dies. Telling the story of the week following that fateful train journey, One Moment, One Morning is a stunning novel about love and loss, about family and – above all – friendship. A stark reminder that, sometimes, one moment is all it takes, it also reminds us that somehow, and despite everything, life can and does go on.

Sarah Rayner is the author of the international bestseller, ‘One Moment, One Morning’ (2010). Her two latest novels, ‘The Two Week Wait’ (2012) and ‘Another Night, Another Day’ (2014), are also set in Brighton, England, and feature some of the same characters.

As a novelist, Sarah is known for tackling difficult subjects such as bereavement, infertility and mental illness with empathy and insight, but her latest books are non-fiction. ‘Making Friends with Anxiety’ is a little self-help book which Sarah hopes will enable people who panic and worry a lot to regain confidence and control, and is often enjoyed with ‘Making Friends with Anxiety: A calming colouring book’ which is illustrated by Jules Miller. ‘Making Friends with the Menopause’ is a guide she’s co-written with Doctor Patrick Fitzgerald to support women through their body changes.

1 comment on “Review: One Moment, One Morning – Sarah Rayner”