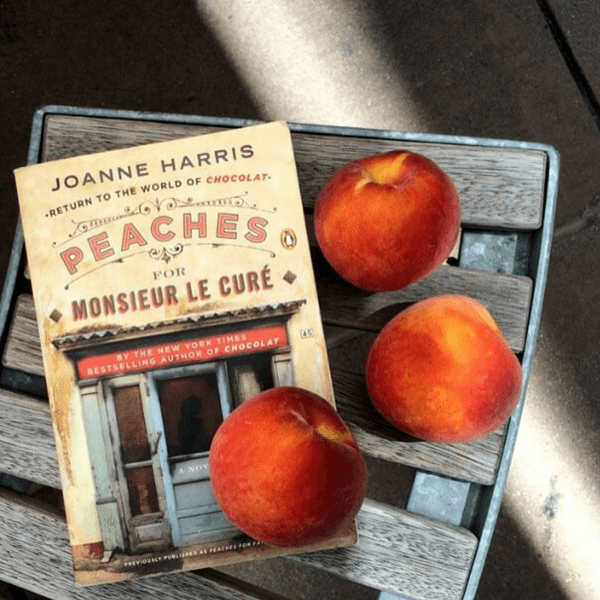 There are very few books that I can recall deliberately taking my time over. If I enjoy a book, I’ll do my damnedest to tear through it as quickly as humanly possible – avoiding social engagements and rising at the crack of dawn to curl up and read. However, when it came to Peaches for Monsieur le Cure, the third in the Chocolat series, I wanted to savour the novel and immerse myself in Harris’s deliciously descriptive writing – and thus only allowed myself to read a chapter a day.

As expected, Peaches for Monsieur le Cure shows Joanne Harris at her very best. Eight years have passed since Vianne Rocher left behind the cobbled streets of Lansquenet where she faced prejudice and isolation, before winning much of the townsfolk over with her chocolate delights and a hint of magic. Now living on a houseboat in Paris with Roux and her two children Anouk and Rosette, the wind of Ramadan and a letter from beyond the grave prompts her to return to the small French village where it all began.

As prominent a character as Vianne herself, the village of Lansquenet has changed in eight years; the scent of spices fill the air, women are veiled in black niqabs and a minaret stands proudly facing the church of Saint Jerome. And with the church introducing modern elements to its service; power point presentations and plastic pews, Vianne forms an unlikely friendship with her old adversary – Frances Reynaud.

RELATED:  Review: Everything I Know About Love - Dolly Alderton

About Peaches for Monsieur le Cure

It isn’t often you receive a letter from the dead. When Vianne Rocher receives a letter from beyond the grave, she has no choice but to follow the wind that blows her back to Lansquenet, the village in south-west France where, eight years ago, she opened up a chocolate shop. But Vianne is completely unprepared for what she finds there. Women veiled in black, the scent of spices and peppermint tea, and there, on the bank of the river Tannes, facing the square little tower of the church of Saint-Jerome like a piece on a chessboard – slender, bone-white and crowned with a silver crescent moon – a minaret. Nor is it only the incomers from North Africa that have brought big changes to the community. Father Reynaud, Vianne’s erstwhile adversary, is now disgraced and under threat. Could it be that Vianne is the only one who can save him?