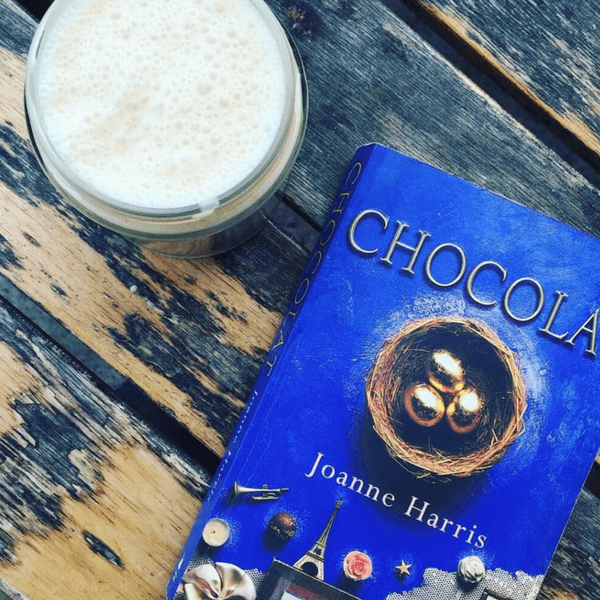 Most of my close friends, and indeed some of my not-so-close acquaintances, will, at some point, have been a victim of my Joanne Harris campaign. In previous posts I’ve touched upon my tendency as a reader to demolish entire back catalogues of writers whose work I enjoy, and Joanne Harris is certainly no objection to the rule.

I still remember where I was when I first bought perhaps Harris’s most acclaimed novel. Having been given some HMV vouchers for Christmas, I made my way to the far right corner of the store where they stocked a small selection of books. Enticed by the front cover – this particular one bore a picture of Johnny Depp – there was also a quote from the Literary Review underneath the blurb: ‘Is this the best book ever written?’ it asked; and so I made a hasty purchase, adding to my ever-growing pile of tomes to read.

Chocolat is set in a fictional French village in Southern France, which immediately lends and atmospheric and evocative air to the book. It tells the story of Vianne Rocher and her six-year-old daughter Anouk, who, upon arriving in Lansquenet-sous-Tannes set up a Chocolaterie. It being the beginning of Lent, such is greeted with heavy disapproval by the local priest, who sees it as a provocative move. While initially much of the village treated Vianne with a level of polite hostility, she soon wins them round with her winning combination of charm and decadent delights.

A simply delicious tale, Chocolat appeals to all the senses as Harris’s descriptive style of writing brings alive an insular French village from a bygone era. Fusing romance, religion, temptation and sin, this magical novel is beautifully written and truly deserves its accolade as one of the best books ever written.

A timeless novel of a straitlaced village’s awakening to joy and sensuality – every page offers a description of chocolate to melt in the mouths of chocoholics, francophiles, armchair gourmets, cookbook readers, and lovers of passion everywhere.

Illuminating Peter Mayle’s South of France with a touch of Laura Esquivel’s magic realism, Chocolat is a timeless novel of a straitlaced village’s awakening to joy and sensuality. In tiny Lansquenet, where nothing much has changed in a hundred years, beautiful newcomer Vianne Rocher and her exquisite chocolate shop arrive and instantly begin to play havoc with Lenten vows. Each box of luscious bonbons comes with a free gift: Vianne’s uncanny perception of its buyer’s private discontents and a clever, caring cure for them. Is she a witch? Soon the parish no longer cares, as it abandons itself to temptation, happiness, and a dramatic face-off between Easter solemnity and the pagan gaiety of a chocolate festival.

Chocolat’s every page offers a description of chocolate to melt in the mouths of chocoholics, francophiles, armchair gourmets, cookbook readers, and lovers of passion everywhere. It’s a must for anyone who craves an escapist read, and is a bewitching gift for any holiday.

RELATED:  Review: The Pillars of the Earth - Ken Follett