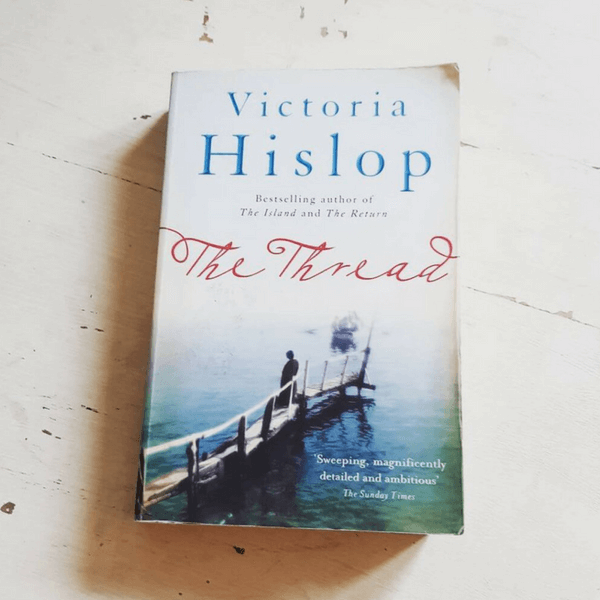 Having torn through both The Island and The Return, I was excited to discover that author Victoria Hislop had a third novel coming out – this time called The Thread. Hislop’s writing excels in conveying a tangible sense of place and she truly is a born storyteller. So enthralled was I with the cobbled streets of Granada and the heady dancing in Hislop’s second novel that I took up salsa soon after. I also spent many weeks longing to visit the small Greek fishing village of Plaka, where her first novel was set; and so I was expecting a similar feeling of wanderlust to emerge on reading her third.

Not dissimilar to both The Island and The Return, Hislop’s latest offering interweaves two different time frames; one set in the present day; the other in 1917, with the plot concentrating primarily on the earlier of the two. In 1917 a devastating fire tears through Greece’s second city Thessalonki, a place where Muslims, Christians and Jews have lived side by side in harmony for years.

The Thread is an apt name for a novel which cleverly weaves a story of race, religion and war using a colourful cast of characters. With a fire, WW1 and serious civil unrest plaguing the streets of Greece, the tale is poignant, and at times harrowing as the effects of such turbulence take their toll on the city’s people. But underneath such tragedy, we witness a love story unfolding between the novel’s two protagonists: wealthy Dimintri Komninos and refuge Katerina who has built a reputation as Thessalonki’s most skilled seamstress.

Ultimately a tale of love and of loss, The Thread further cements Hislop’s status as a skilled storyteller, who has an unrivalled ability to craft a beautifully engaging plot alongside a real and devastating history.

RELATED:  The art of book blogging and an interview with Open Book

A beautiful and epic novel that spans nearly a hundred years, The Thread is a magnificent story of a friendship and a love that endures through the catastrophes and upheavals of the twentieth century–both natural and man-made–in the turbulent city of Thessaloniki, Greece. Victoria Hislop, internationally bestselling author of The Island and The Return, has written a wonderfully evocative and enthralling saga enriched by deep emotion and sweeping historical events, from fire to civil war to Nazi brutality and economic collapse. The Thread is historical fiction at its finest, colorful and captivating with truly unforgettable characters–a novel that brilliant captures the energy and life of this singular Greek city.

Victoria Hislop read English at Oxford, and worked in publishing, PR and as a journalist before becoming a novelist. She is married with two children.

Her first novel, The Island, held the number one slot in the Sunday Times paperback charts for eight consecutive weeks and has sold over two million copies worldwide. Victoria was the Newcomer of the Year at the Galaxy British Book Awards 2007 and won the Richard & Judy Summer Read competition.

Her second novel, The Return, was also a Sunday Times number one bestseller, and her books have been translated into more than twenty languages. A short story collection, One Cretan Evening, was published in September and both a third novel, The Thread was published in English in October and in Greek in November 2011.