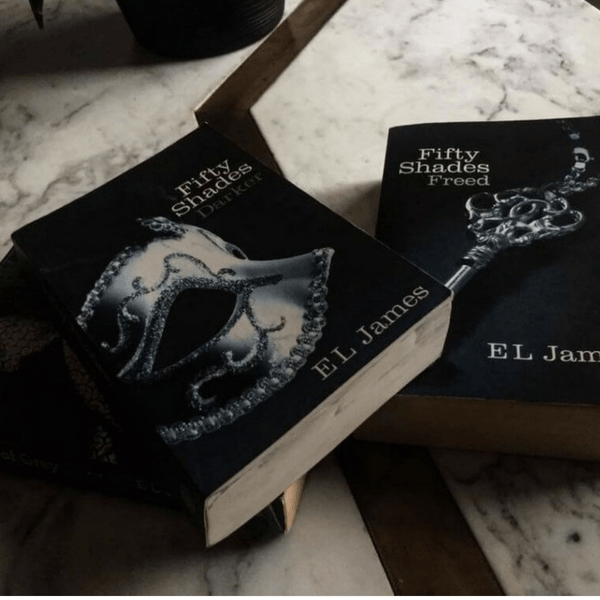 Unless you’ve been hiding under a very large rock, in a very dark cave somewhere off a remote island, or have absolutely zero interest in anything happening in either the news or mainstream popular culture, chances are you’ve heard about the Fifty Shades of Grey Trilogy by British author E. L James. When I was on holiday in Croatia, approximately half of the women on the beach were reading one of the three novels, and even my youngest sister Mariella, who very rarely reads, had torn through E. L James’ debuts. Since their publication, there’s been a Channel 4 documentary on the books, two features on ITV’s This Morning, and copious articles written about both the popularity and controversy of the books.

As a seasoned reader, I often tend to avoid reading books that take the world by storm – I’ve only read one of the Harry Potter series; I never got into Alice Seabold’s The Lovely Bones and I still have an unread copy of Dan Brown’s the Da Vinci Code. However, purely for blogging purposes (ahem), and having been recommended the novels by a number of girlfriends, I decided to see what all the fuss was about.

I must pre-warn any followers of my blog that if you want to read Fifty Shades of Grey in a public place, do so at your own peril. I was innocently waiting outside Earls Court for a friend en route to The Olympics when one of the stewards decided to creep up behind me with his speakerphone and shout for all to hear: ‘Are you enjoying the story of MR Grey young lady?! My colleagues and I hear it’s rather frisky!’ Obviously frightfully amused, his colleagues doubled over in laughter while I blushed profusely, and murmured something about having a book blog, an explanation which he clearly didn’t buy. I’ve also been winked at by a fellow (female) commuter and a friend of mine also had a rather unwelcome experience on the tube which involved a rather pervy man.

Fifty Shades of Grey tells the story of Literature graduate Anastasia Steele who embarks upon a relationship with billionaire Christian Grey, having interviewed him for the university newspaper. Their relationship, however, is far from conventional and involves a ‘Red Room of Pain’, riding crops, cable ties and a signed contract in which Anastasia must consent to be a submissive to Christian’s dominant.

While many say that the plot that weaves its way through the three books is simply a vehicle for a plethora of graphic sex scenes, the trilogy isn’t simply one sordid encounter after another, and while Fifty Shades is certainly no great work of literature, it serves a purpose as such. Much like the Jeremy Kyle of books, it’s trashy and cringeworthy for the most part, but equally entertaining and addictive.

The end of Fifty Shades Freed, the final book in the trilogy, is not dissimilar to the conclusion of a modern-day fairy-tale: girl meets boy, changes him against the odds, and they both live happily ever after.

Fifty Shades of Grey will never top a literature poll, but if you’re after a light and entertaining read then it will certainly fit the bill. And if it encourages people to read who have never previously done so, then in my eyes it’s no bad thing.

About the Fifty Shades of Grey trilogy

Fifty Shades of Grey: When college student Anastasia Steele goes to interview young entrepreneur Christian Grey, she encounters a man who is beautiful, brilliant, and intimidating.  The unworldly Ana realizes she wants this man, and Grey admits he wants her, too—but on his own terms. When the couple embarks on a daring, passionately physical affair, Ana discovers Christian’s secrets and explores her own desires.

Fifty Shades Darker: Daunted by Christian’s dark secrets and singular tastes, Ana has broken off their relationship to start a new career. But desire for Christian still dominates her every waking thought. They rekindle their searing sensual affair, and while Christian wrestles with his inner demons, Ana is forced to make the most important decision of her life.

Fifty Shades Freed: Now, Ana and Christian have it all—love, passion, intimacy, wealth, and a world of possibilities for their future. But Ana knows that loving her Fifty Shades will not be easy, and that being together will pose challenges that neither of them would anticipate. Just when it seems that their strength together will eclipse any obstacle, misfortune, malice, and fate conspire to turn Ana’s deepest fears into reality.

After twenty-five years working in TV, E L James decided to pursue her childhood dream, and set out to write stories that readers would fall in love with. The result was the sensuous romance Fifty Shades of Grey and its two sequels, Fifty Shades Darker and Fifty Shades Freed, a trilogy that went on to sell more than 150 million copies worldwide in 52 languages. In 2015 she published the best seller Grey, the story of Fifty Shades of Grey from the perspective of Christian Grey.

In 2012, E L James was named one of Time magazine’s “Most Influential People in the World,” one of Barbara Walters’s “Ten Most Fascinating People of the Year,” and Publishers Weekly’s “Person of the Year.” She went on to work as a producer on the film adaptations of her trilogy for Universal Pictures; Fifty Shades of Grey, the film, broke box-office records all over the world in 2015. Its 2017 sequel, Fifty Shades Darker, proved equally popular with fans of Ana and Christian’s story, and the concluding film, Fifty Shades Freed, will be released in 2018.

E L James lives with her husband, the novelist and screenwriter Niall Leonard, their two sons, and their two dogs in West London, where she is working on new novels and movie projects.