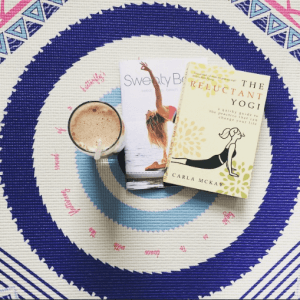 Not disimilar to Lucy Edge’s Yoga School Drop Out, Carla McKay’s The Reluctant Yogi is an account of her relationship with yoga and how it first came about. Separated from a husband she was to later reconcile with, McKay takes up yoga following the recommendation from a friend and, despite her initial reluctance, soon finds herself a fan of the practise.

Part memoir, part guide, much of The Reluctant Yogi looks at the benefits one can expect from regular practise – from improved flexibility and muscle strength, to lower stress levels and better sleep. Such is backed up by numerous studies, on which McKay touches upon throughout the narrative, and it is clear that the author has done extensive research into both the history and practise of yoga in order to provide her reader with a clear, informative guide into a practise many know little about.

The more I practise, indeed the more I learn about yoga and the more stories I read, the clearer it becomes that the reasons people have for taking it up are as varying and wide-spread as the wealth of poses involved in the practise. The one thread, however, that seems commonplace among yogis, is that yoga is much more of a lifestyle choice than simply weekly class at a local gym. Both inspiring and informative, McKay’s The Reluctant Yogi is a great read for anyone interested in yoga, however accomplished in their practise they might be.