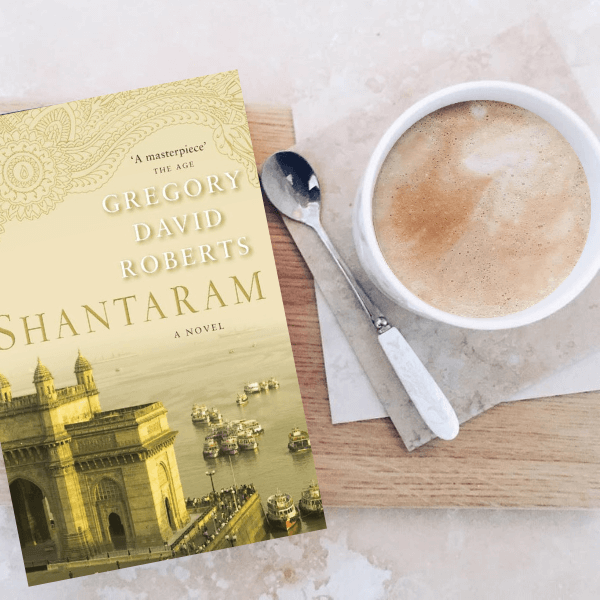 Shantaram is one of those books that I’ve meant to read for years. I don’t remember when I first heard about it, simply that it’s been recommended to me a number of times, particularly since starting my blog. Yet, up until recently, it remained on my shelf, gathering dust like my hundred-or-so other unread novels, while I patiently waited for the perfect time to begin this novel of epic proportion

It was only when I was a hundred pages into a novel that I wasn’t really enjoying that I finally decided to begin Shantaram, a fact for which I will forever be thankful. At 944 pages, Shantaram is  by no means a quick read – certainly its size was the main factor for my reluctance to begin it. However, I needn’t have worried; from the first page in I was hooked.
There’s been much debate over where the boundaries lie between fact or fiction. Indeed it’s a matter of public record that, as depicted in the tale, its author, Gregory David Roberts escaped from Melbourne jail and then spent a number of years in India – many of which in a slum – before being caught smuggling heroin in Germany, and extradited to Australia, where he carried out the rest of his sentence. It was while in jail after the alleged events of Shantaram, that Roberts wrote this book, though twice the manuscript was destroyed by prison guards. Roberts has maintained that Shantaram is a work of fiction, though has certainly implied that much of the events that lie within the novel were heavily influenced by his experience in the Bombay underworld.
The tale follows Roberts from his escape from a high-security Melbourne jail to the slums of Bombay where he sets up a medical centre and befriends the locals, impressing them with his knowledge of their language. Perhaps the most memorable character Roberts meets during his time in India is Prabaktar, who is described with such love and such flair, that it’s almost impossible to believe that he wasn’t based on one of the many slum dwellers that Roberts would have come to know and cherish.
A fusion of both memoir and travel writing, much of Shantaram reads like a thriller as Roberts’ propensity for getting into numerous dangerous situations becomes apparent. The prose is poetic and vivid, and Roberts depicts the slums of Bombay and his time in India as a whole in wonderful juxtapositions as we witness the enormous highs and the all-consuming lows Roberts experiences on his Indian adventure.
Whether fact or fiction, truth or tale, Shantaram is a novel that will stay with its reader for many, many years after the final page is finished. Beautiful, heart-breaking and wild, it is epic in every sense of the word.

“It took me a long time and most of the world to learn what I know about love and fate and the choices we make, but the heart of it came to me in an instant, while I was chained to a wall and being tortured.”

So begins this epic, mesmerizing first novel set in the underworld of contemporary Bombay. Shantaram is narrated by Lin, an escaped convict with a false passport who flees maximum security prison in Australia for the teeming streets of a city where he can disappear.

Accompanied by his guide and faithful friend, Prabaker, the two enter Bombay’s hidden society of beggars and gangsters, prostitutes and holy men, soldiers and actors, and Indians and exiles from other countries, who seek in this remarkable place what they cannot find elsewhere.

As a hunted man without a home, family, or identity, Lin searches for love and meaning while running a clinic in one of the city’s poorest slums, and serving his apprenticeship in the dark arts of the Bombay mafia. The search leads him to war, prison torture, murder, and a series of enigmatic and bloody betrayals. The keys to unlock the mysteries and intrigues that bind Lin are held by two people. The first is Khader Khan: mafia godfather, criminal-philosopher-saint, and mentor to Lin in the underworld of the Golden City. The second is Karla: elusive, dangerous, and beautiful, whose passions are driven by secrets that torment her and yet give her a terrible power.

Burning slums and five-star hotels, romantic love and prison agonies, criminal wars and Bollywood films, spiritual gurus and mujaheddin guerrillas – this huge novel has the world of human experience in its reach, and a passionate love for India at its heart. Based on the life of the author, it is by any measure the debut of an extraordinary voice in literature.

Gregory David Roberts was born in Melbourne, Australia. A gifted writer and student, he became addicted to heroin when his marriage collapsed and he lost the custody of his daughter. When he committed a series of robberies with an imitation pistol, he was described as the Gentleman Bandit. Sentenced to nineteen years in prison, he escaped and journeyed to New Zealand, Asia, Africa, and Europe. For ten of those fugitive years he lived in Bombay-where he established a free medical clinic for slum-dwellers, and worked as a counterfeiter, smuggler, gunrunner, and street soldier for a branch of the Bombay mafia. Recaptured in Germany, he served out his sentence there and in Australian prisons. Upon his release, he established a successful multimedia company, and since the international publication of Shantaram, he is a full-time writer, at home in several countries.