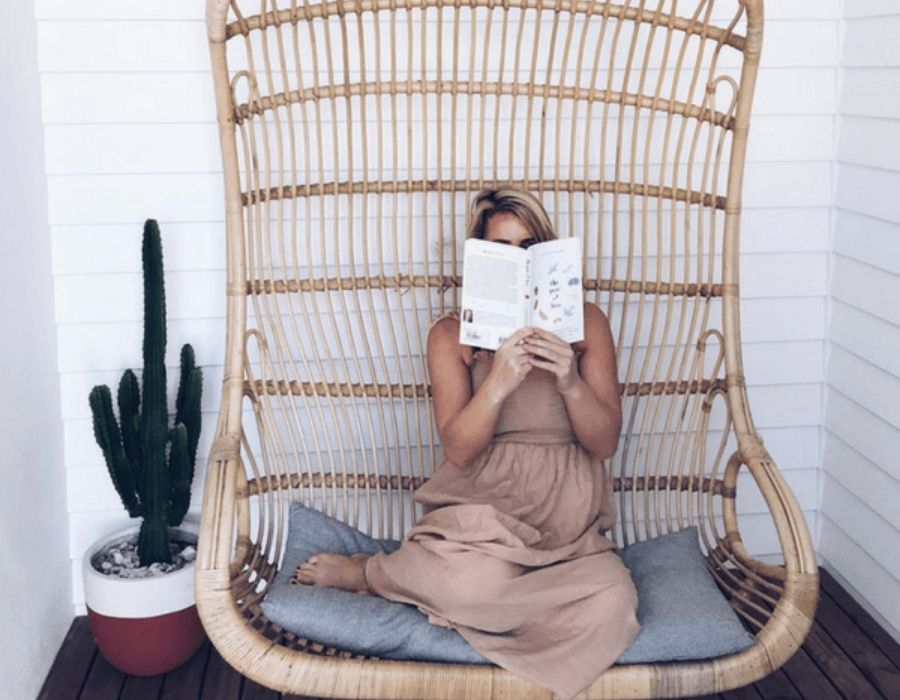 I had been meaning to read The Year of Less by Cait Flanders for a number of weeks before I finally found myself a copy while perusing the shelves of The Book Room at Byron. I had unsuccessfully searched for a copy of the book in Sydney, and so, while visiting Byron for its annual writer’s festival, despite having packed an ambitious pile of books for the long weekend, I happily bought myself a copy, before finding a quiet spot in the winter sun and getting stuck in.

Moving to Australia has certainly made me a more mindful consumer; while when living in London I loved nothing more than adding to my collection of books and soft furnishings, and spent most Sundays poring over the careful set tables of Battersea car boot sale, moving to a different country – one in which I have no idea how long I’ll be living – has certainly curbed my fairly average shopping habit. Last year in particular had a massive impact on my spending – or lack thereof; not only was I living on a substantially lower budget than ever before, but I also spent much of the year living out of a suitcase; first in Bali, then LA and London, meaning that I rarely bought anything that would need packing in my limited luggage.

And while my year of limited shopping certainly pales in comparison to that of Cait Flanders, I can certainly relate to her desire for living with less.  Author of The Year of Less and a self-confessed former binge consumer, Cait paid off $30k of debt before setting herself the challenge to not shop for an entire year. There were, of course, some exceptions to the rule: Cait was allowed to shop for groceries, fill her car with petrol, and replace toiletries as and when they ran out, but frivolous and mindless spending was strictly off limits.

RELATED:  The Sense of an Ending Book Review

What follows is Cait’s month by month account of how she learnt to live with less; both by ridding herself of accumulated junk, and putting a stop to unnecessary spending. It was to become an instrumental year for Cait – a year of discoveries, and one in which Cait learnt how to fix things and sew, sought to watch less TV, changed unhealthy habits, started new traditions, nourished soulful friendships, and truly discovered what it was that she wanted to do with her life.

A galvanising and and invigorating memoir about discovering that life is worth more than anything you can find in a store, I defy anyone to read The Year of Less without wanting to follow in Cait’s footsteps to declutter and consume more mindfully in order to embrace a richer and more fulfilled way of living.

About The Year of Less

In her late twenties, Cait Flanders found herself stuck in the consumerism cycle that grips so many of us: earn more, buy more, want more, rinse, repeat. Even after she worked her way out of nearly $30,000 of consumer debt, her old habits took hold again. When she realized that nothing she was doing or buying was making her happy—only keeping her from meeting her goals—she decided to set herself a challenge: she would not shop for an entire year.

The Year of Less documents Cait’s life for twelve months during which she bought only consumables: groceries, toiletries, gas for her car. Along the way, she challenged herself to consume less of many other things besides shopping. She decluttered her apartment and got rid of 70 percent of her belongings; learned how to fix things rather than throw them away; researched the zero waste movement; and completed a television ban. At every stage, she learned that the less she consumed, the more fulfilled she felt.

The challenge became a lifeline when, in the course of the year, Cait found herself in situations that turned her life upside down. In the face of hardship, she realized why she had always turned to shopping, alcohol, and food—and what it had cost her. Unable to reach for any of her usual vices, she changed habits she’d spent years perfecting and discovered what truly mattered to her.

Blending Cait’s compelling story with inspiring insight and practical guidance, The Year of Less will leave you questioning what you’re holding on to in your own life—and, quite possibly, lead you to find your own path of less.

Cait Flanders is a former binge consumer turned mindful consumer of everything. Through personal stories, she writes about what happens when money, minimalism, and mindfulness cross paths. Cait’s story has been shared in The New York Times, The Globe and Mail, Vogue, Oprah.com, and more. Her first book, The Year of Less, is a self-help memoir and a Wall Street Journal bestseller.

Tree Hugger’s book review of The Year of Less is well worth a read; and the Slow Your Home podcast with Cait Flanders is great.

2 comments on “Review: The Year of Less – Cait Flanders”