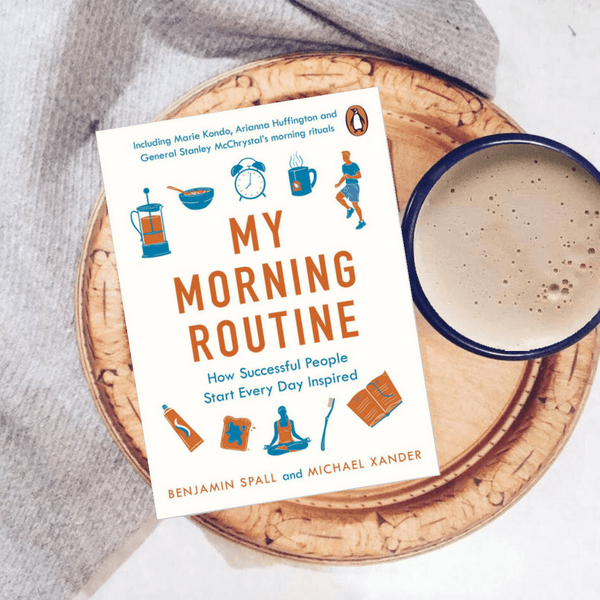 One of my most-listened to podcasts in recent months has been Tea & Tattle; hosted by friends Miranda Mills and Sophie Perdita, they discuss everything from books to fashion and wellbeing, as well as featuring interviews with creative women and debut authors. One of my favourite episodes of late was the one in which the hosts discussed their morning routines, which gave an inspiring insight into their morning habits, and the ways in which they set themselves up for the day. It was shortly after listening to this particular episode that I came across the website My Morning Routine. The brainchild of Michael Xander and Benjamin Spall, the website launched in 2012 and has since published interviews with 296 people living all over the world, from bestselling authors to successful entrepreneurs, and inspiring creatives.

I don’t know what it is that I find so fascinating about the intricacies of other people’s morning regimes, but suffice it to say that as soon as I found out the founders of the site were publishing a book, I sought myself a copy from my local bookshop, and read it one morning, curled up in bed with a piping hot cup of tea.

Featuring a diverse mix of people – from authors to CEOs, to sportswomen and retired military men, My Morning Routine is divided into ten chapters – getting up, focus and productivity, morning workouts, morning meditation, evening routines, sleep, parents, self-care, different environments and adaptation – each of which includes actionable items and inspiring tips to help the reader improve their own relationship with everything from sleep, to stress, to exercise and meditation.

I loved reading about the various interviewees, and the routines they’ve put in place to make their mornings productive; from meditation apps, to avoiding their phone altogether, to freshly brewed coffee, sun salutations and early morning dog walks. With insights from career coaches and mediation teachers, it’s was an inspiring read from start to finish, full of useful exercises and self reflections that left me wanting to improve my own morning routine.

A quick, original and thought-provoking read for anyone needing a routine refresh or some ideas to set up a more fulfilling life, My Morning Routine is the perfect book to devour in a single sitting, before dipping back into every time you find yourself in need of a productivity pick-me-up.

About My Morning Routine

Marie Kondo performs a quick tidying ritual to quiet her mind before leaving the house. The president of Pixar and Walt Disney Animation Studios, Ed Catmull, mixes three shots of espresso with three scoops of cocoa powder and two sweeteners. Fitness expert Jillian Michaels doesn’t set an alarm, because her five-year-old jolts her from sleep by jumping into bed for a cuddle every morning.

Some routines are all about early morning exercise and spartan living; others are more leisurely and self-indulgent. What they have in common is they don’t feel like a chore. Once you land on the right routine, you’ll look forward to waking up.

This comprehensive guide will show you how to get into a routine that works for you so that you can develop the habits that move you forward. Just as a Jenga stack is only as sturdy as its foundational blocks, the choices we make throughout our day depend on the intentions we set in the morning. Like it or not, our morning habits form the stack that our whole day is built on.

Whether you want to boost your productivity, implement a workout or meditation routine, or just learn to roll with the punches in the morning, this book has you covered.

Benjamin Spall is the founding editor of the online magazine My Morning Routine. He has written on the topic for outlets including the Huffington Post, 99U, and the Next Web.

Michael Xander is the co-founder of the online magazine My Morning Routine, a product designer, and engineer.