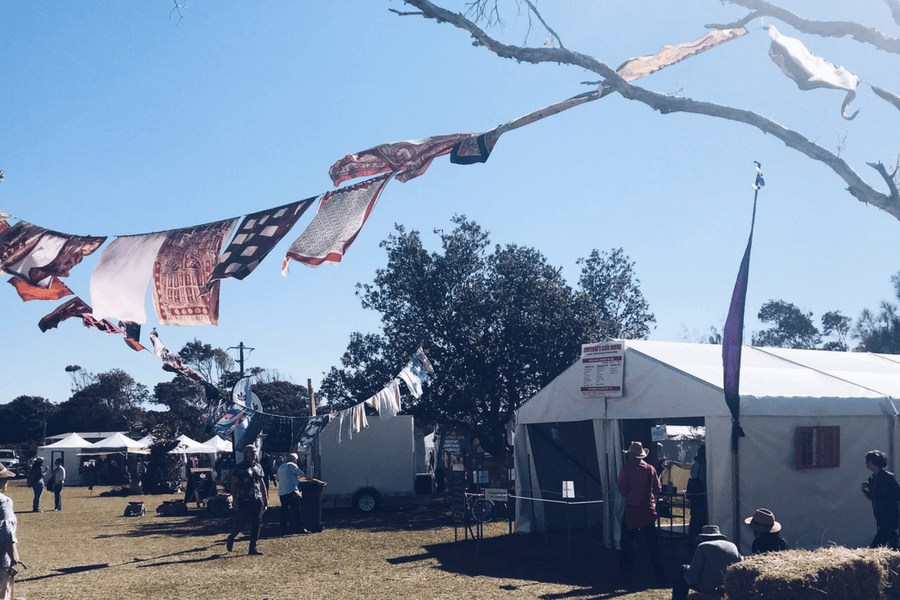 In the UK, literary festivals are usually synonymous with wet weather, waterproofs and wine; Byron Bay Writer’s Festival – an annual occurrence and a key player in Australia’s literary calendar – however, is quite the opposite. Set in one of Australia’s most beautiful beach towns, Byron Bay offers visitors a perfect slice of beach paradise and year round balmy temperatures. A coastal town in northern New South Wales, while once known as a backpackers’ mecca with hostels and hippies a-plenty, recent years has seen Byron establish itself as the go-to place for a relaxing beach break, and entices visitors throughout the year with its eclectic series of festivals and events as well as a stylish array of brunch spots and boutique shops.

As my go-to destination whenever I need to escape the city, the Byron Bay Writer’s Festival really is the dream weekend away for anyone with a penchant for literature, and with an impressive line up of international authors it really is the ultimate bookish break for anyone who wants to fuse their love of beautiful beaches with brilliant books.

Having left sorting out the finer details of my trip right up until the last minute, I flew into the nearby Gold Coast airport, rather than the more local option, Ballina, as the airfares were slightly cheaper, and the distance into central Byron Bay fairly equidistant. Despite knowing I would be buying books at the festival, my weekend bag consisted of little other than an unread pile of five books, my laptop, and a couple of changes of weather-appropriate clothes, including – perhaps rather ambitiously – a bikini, excited at the prospect of seeing some of my very favourite authors in my very favourite place. 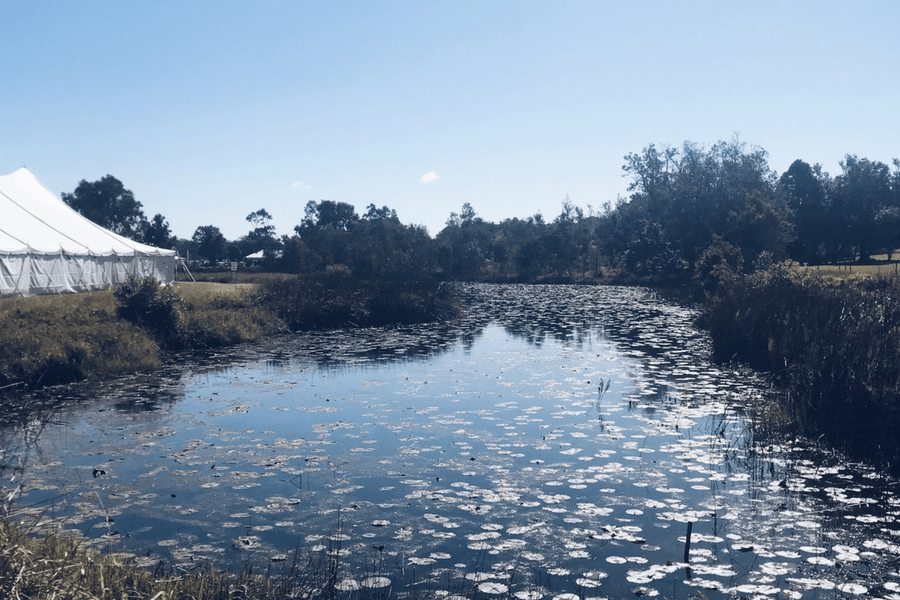 It was in the shuttle bus en route to Byron that I was to meet my first author of the weekend: Michael Ableman; an American-Canadian author, organic farmer, educator, and advocate for sustainable agriculture who I quickly bonded with over our fondness for Byron and books. It soon turned out that he was on the panel for a talk I had bookmarked to see, alongside UK literary heavyweight Matt Haig, and Bondi-based author and founder of I Quit Sugar, Sarah Wilson, both of whom I was eager to see. I disembarked the shuttle bus shortly after Michael, checked into my sun drenched Air BnB and swift made my way to The Book Room at Byron, for a pre-festival book browse, where I picked up a copy of Cait Flander’s The Year of Less, before finding a quiet spot on the beach to read.

I was woken early the next day by the winter sun streaming through our patio doors, and made the most of the morning by venturing out for a stroll on Byron’s main stretch of beach before catching the shuttle to the festival. Having read – and adored – Jane Harper’s bestselling debut The Dry, I was so looking forward to seeing her in conversation with Marelle Day, and it was certainly one of the highlights of the festival for me. They discussed how Jane found out that her debut had been optioned by Reese Witherspoon’s film production company, and what her tips for aspiring writers were; mainly: to write the book first, and worry about it later. Jane also spoke about the online course that was instrumental in the writing of The Dry, and how her background as a journalist helped hone her craft as a writer.

Saturday brought with it more blue skies and sunshine, so after an early morning breakfast and iced coffee in town, we hopped on the shuttle bus to the festival. First up we saw a talk on Fostering Empathy Through Fiction with Matt Haig, Trent Dalton and Elise Valmorbida, which was an inspiring and thought provoking discussion about everything from depression to addiction, and how the power of fiction can help readers see life through a completely different lens. We then moved onto Weapons of War: No Holds Barred with Peter Greste, Karen Middleton and Sarah Sentilles before making the most of the festival’s proximity to the water by enjoying a lazy midday break on the almost empty beach, admiring the sun dappled sea and endless stretch of shoreline. Our final talk of the day was an honest conversation on anxiety during which authors Michael Ableman, Sarah Wilson, Matt Haig and Jarrah Dundler discussed what both living with it, and writing about it entailed. Having read Sarah Wilson’s memoir, What Makes the Beast Beautiful, and Matt Haig’s Reasons to Stay Alive, I loved hearing more about their own personal experiences and coping mechanisms, and how they’ve both managed to utilise their anxiety as a fuel for their writing.

Sunday: I saw The First Time: Debut Fiction, in which Trent Dalton, who recently published Boy Swallows Universe Jarrah Dundler, author of Hey Brother and Moreno Giovannoni, author of The Fireflies of Autumn, spoke about the good the bad and the ugly of being a debut writer. 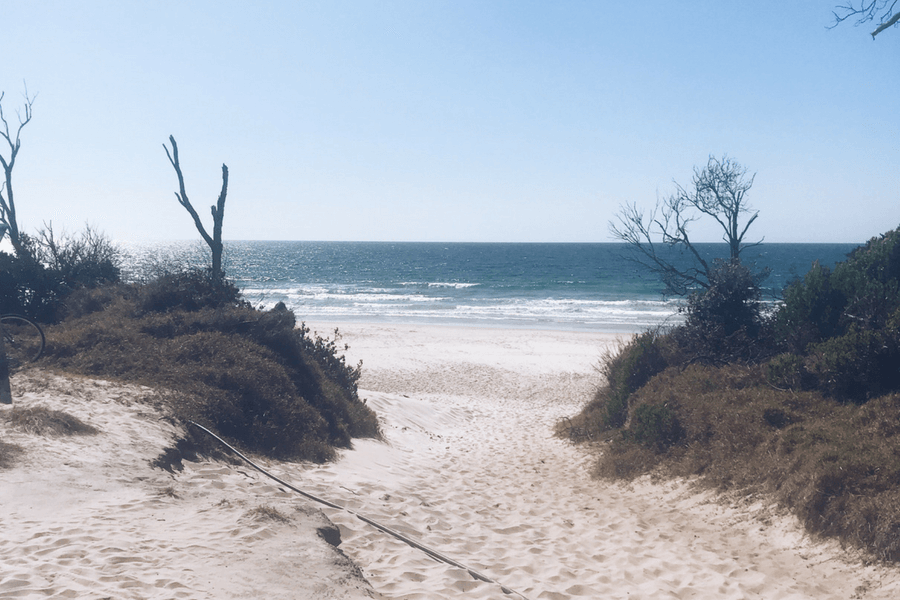 Leaving Byron is never much fun, and it becomes even less so after such a brilliantly bookish weekend. The highlights to the festival were ample and endless – the bright blue skies and sunshine that were the perfect backdrop to the three day festival; being able to walk barefoot along the beach back into the town centre, seeing such a brilliant line up of writers whose work I’ve loved for a while, and finding yet more authors whose books now line my shelves. It was everything a writers festival should be and more: inspiring authors, idyllic location and offering plenty of food for thought, and has further cemented this beautiful beach town as my favourite place on earth.

The annual Byron Writers Festival is Australia’s largest and leading regional celebration of storytelling, literature and ideas. Each year we present more than 150 sessions during Festival Week and attract an audience of approximately 12,000 people (or 70,000 individual attendances) in the stunning surrounds of Byron Bay.

The Festival line-up includes 140 predominantly Australian writers and thinkers who together challenge, entertain and share their stories, inspirations and insights.

Byron Writers Festival is renowned for its relaxed atmosphere and for delivering a diverse program of stimulating and entertaining conversations that celebrate storytelling in all its forms. We aim to bring writers together in an environment that nurtures and invigorates them as much as it does our audience.

The Festival runs in August. For up-to-date information on the Festival Program, please visit their website, and be sure subscribe to their e-newsletter for program announcements and ticket releases.