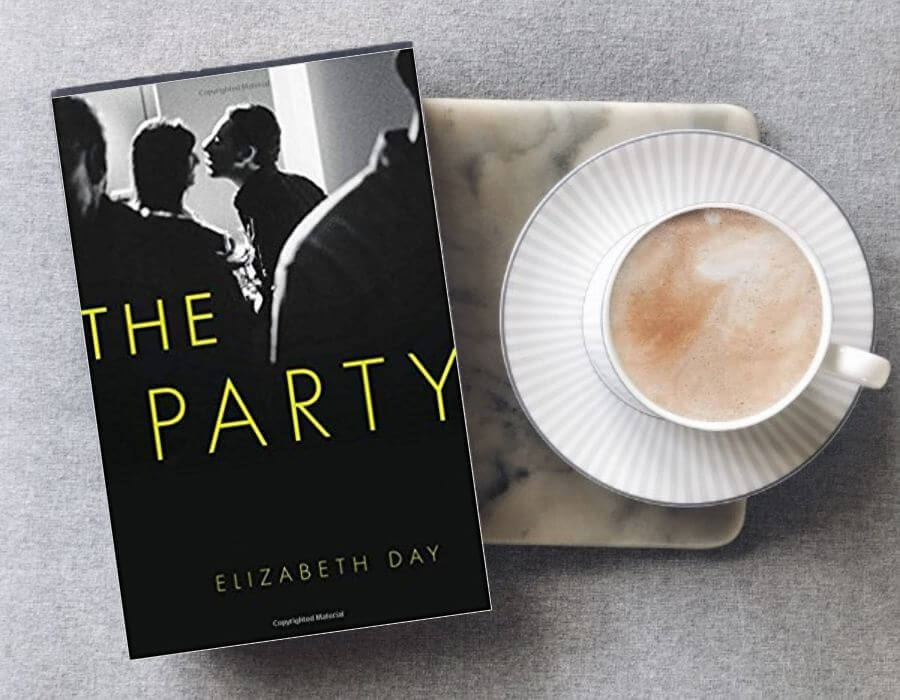 Despite having just 30kg of luggage allowance, I bought twenty-two books back to Australia with me, choosing instead to leave most of my clothes in a trunk at my mum’s cottage in order to make room for a selection of the books I’d been sent over the past couple of months. In addition to the twenty-two books, I packed two in my hand luggage – Eileen by Ottessa Moshfegh and The Party by Elizabeth Day. I finished Eileen by the time I reached Hong Kong, and spent the second leg of my flight reading The Party, devouring a sizeable chunk prior to landing in Sydney

And as much as I detest jet lag, and detest it I very much do, there’s something about waking up in the (very) early hours of the morning, while all is still silent and dark, that offers the perfect sort of reading conditions in which to finish a book, thus enabling me to finish Elizabeth Day’s fourth book in two short and swift sittings.

The Party is a captivating and suspenseful tale from its very opening, and revolves around married couple Martin and Lucy and the fortieth birthday of Ben, Martin’s oldest and closest friend. An esteemed art critic and author, after winning a scholarship to a fee-paying school, Martin is enthralled by the privileged clique; the golden allure of wealth and exclusivity, and quickly makes himself indispensable to both Ben and his family.

Twenty-five years later – a time during which the pair have remained firm friends – Ben’s fortieth sees the rich and the famous gather to celebrate his birthday in his newly acquired Cotswold manor house.  It’s immediately obvious that something happened at Ben’s party, and as the plot progresses the story slowly begins to unfold from four different angles; Martin’s interview with the police in the wake of the party; the night of the party itself, flash-backs to Martin and Ben’s blossoming friendship through school and university and, finally, diary entries from Martin’s wife Lucy.

The sort of book you want to savour, but equally one whose captivating nature makes it impossible to put down, The Party’s unlikeable cast of characters, pacy plot and a clever climax at the its finale,  has found itself a firm place in my favourite reads of 2018.

Want to find out more about Elizabeth Day? Here are the books she’d take with her to a desert island.

A gripping story of obsession and betrayal, privilege and hypocrisy, set in the unassailable heart of the British establishment.

As the train pressed on, I realised that my life was in the process of taking a different direction, plotted according to a new constellation. Because, although I didn’t know it yet, I was about to meet Ben and nothing would ever be the same again.

Martin Gilmour is an outsider. When he wins a scholarship to Burtonbury School, he doesn’t wear the right clothes or speak with the right kind of accent. But then he meets the dazzling, popular and wealthy Ben Fitzmaurice, and gains admission to an exclusive world. Soon Martin is enjoying tennis parties and Easter egg hunts at the Fitzmaurice family’s estate, as Ben becomes the brother he never had.

But Martin has a secret. He knows something about Ben, something he will never tell. It is a secret that will bind the two of them together for the best part of 25 years.

At Ben’s 40th birthday party, the great and the good of British society are gathering to celebrate in a haze of champagne, drugs and glamour. Amid the hundreds of guests–the politicians, the celebrities, the old-money and newly rich–Martin once again feels that disturbing pang of not-quite belonging. His wife, Lucy, has her reservations too. There is disquiet in the air. But Ben wouldn’t do anything to damage their friendship. Would he?

Elizabeth Day is an author and journalist. Her fourth novel,The Party  is out in July 2017, published by 4th Estate in the UK, Little Brown in America, Belfond in France and Dumont in Germany.

Her debut novel Scissors, Paper, Stone won a Betty Trask Award. Her follow-up, Home Fires was an Observer Book of the Year. Her third, Paradise City was named one of the best novels of 2015 in the Observer, Paste Magazine and the Evening Standard, and was People magazine’s Book of the Week.

She is a feature writer for numerous publications in the UK and US including The Telegraph, The Times, the Guardian, the Observer, Vogue, Grazia, the Radio Times, Elle, Marie Claire, Glamour, InStyle, the Lonely Planet Magazine, The Pool and Cosmopolitan. She is a contributing editor for Harper’s Bazaar. A versatile and wide-ranging writer, her work incorporates everything from celebrity interviews to crime reportage.

Elizabeth grew up in Northern Ireland and her first job was for The Derry Journal. Since then, she has worked for The Evening Standard, The Sunday Telegraph, The Mail on Sunday and the Observer where she was staff feature writer for eight years. She won a British Press Award in 2004 for Young Journalist of the Year and was Highly Commended as Feature Writer of the Year in 2013. She is the co-founder of Pin Drop, a live performance short story studio, and a regular contributor to Sky News and BBC Radio 4.