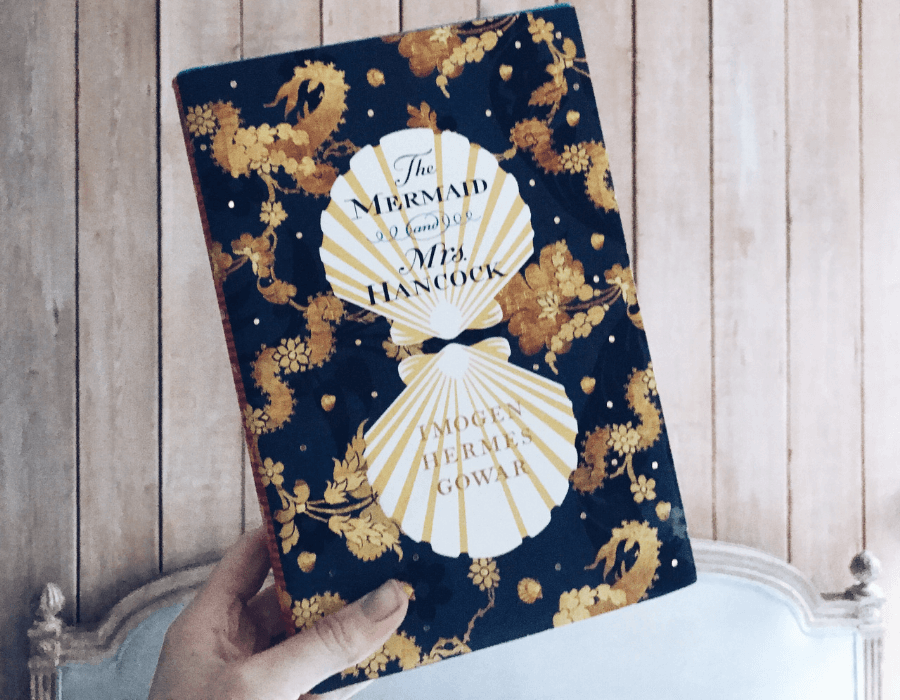 The Mermaid and Mrs Hancock by Imogen Hermes Gowar had long been on my radar prior to it being shortlisted for The Sunday Times / Peters Fraser + Dunlop Young Writer Of The Year Award (in association with The University of Warwick). As well as being on the 2018 Women’s Prize for Fiction Shortlist, its beautiful front cover has been all over Instagram in recent months, and yet it wasn’t until being on the shadow panel for the Sunday Times Young Writer of the Year Award Prize that I finally got around to reading it.

A compelling tale from the very first page, The Mermaid and Mrs Hancock is an enchanting debut set in 18th century London that is rich in atmosphere and exquisite detail. The story centres around the life of merchant John Hancock, who has come into possession of a mermaid and consequently finds himself moving among a wider society of London he has no prior experience of. He meets vivacious courtesan Angelica Neal, whose glory days are coming to a close, and an unconventional romance blossoms between the unlikely couple. However, their path to true love is littered with a wealth of obstacles and as the tale progresses so too does their relationship.

A captivating reflection on class, desire, and morals, the prose throughout The Mermaid and Mrs Hancock is beautiful, abundant with wonderful descriptions and rich period details, and her sense of setting is both immersive and whimsical. London and its dark glimmering corners are evoked wonderfully and its theatres brothels, coffee houses, and the villainy, the dangers, the dirt and the stench are really brought to life.

A page-turning and lively historical romp with well-drawn characters, a pacy plot and richly imagined and evocative settings, The Mermaid and Mrs Hancock is an impressive debut, and one that will no doubt see Gowar with a legion of fans, eagerly waiting what comes next from this talented young writer.

About The Mermaid and Mrs Hancock

One September evening in 1785, the merchant Jonah Hancock hears urgent knocking on his front door. One of his captains is waiting eagerly on the step. He has sold Jonah’s ship for what appears to be a mermaid.

As gossip spreads through the docks, coffee shops, parlours and brothels, everyone wants to see Mr Hancock’s marvel. Its arrival spins him out of his ordinary existence and through the doors of high society. At an opulent party, he makes the acquaintance of Angelica Neal, the most desirable woman he has ever laid eyes on… and a courtesan of great accomplishment. This meeting will steer both their lives onto a dangerous new course, on which they will learn that priceless things come at the greatest cost.

Where will their ambitions lead? And will they be able to escape the destructive power mermaids are said to possess?

In this spell-binding story of curiosity and obsession, Imogen Hermes Gowar has created an unforgettable jewel of a novel, filled to the brim with intelligence, heart and wit.

Imogen studied Archaeology, Anthropology and Art History at UEA’s Sainsbury Centre for Visual Arts before going on to work in museums. She began to write small pieces of fiction inspired by the artefacts she worked with and around, and in 2013 won the Malcolm Bradbury Memorial Scholarship to study for an MA in Creative Writing at UEA.

RELATED:  Cleopatra and Frankenstein: A beautiful debut by Coco Mellors

She won the Curtis Brown Prize for her dissertation, which grew into a novel titled The Mermaid and Mrs Hancock. An early draft was a finalist in the MsLexia First Novel Competition 2015, and it was also one of three entries shortlisted for the inaugural Deborah Rogers Foundation Writers’ Award.

Imogen lives, works, and walks around south-east London – an area whose history she takes a keen interest in – and her first novel, The Mermaid & Mrs Hancock, was published in 2018.