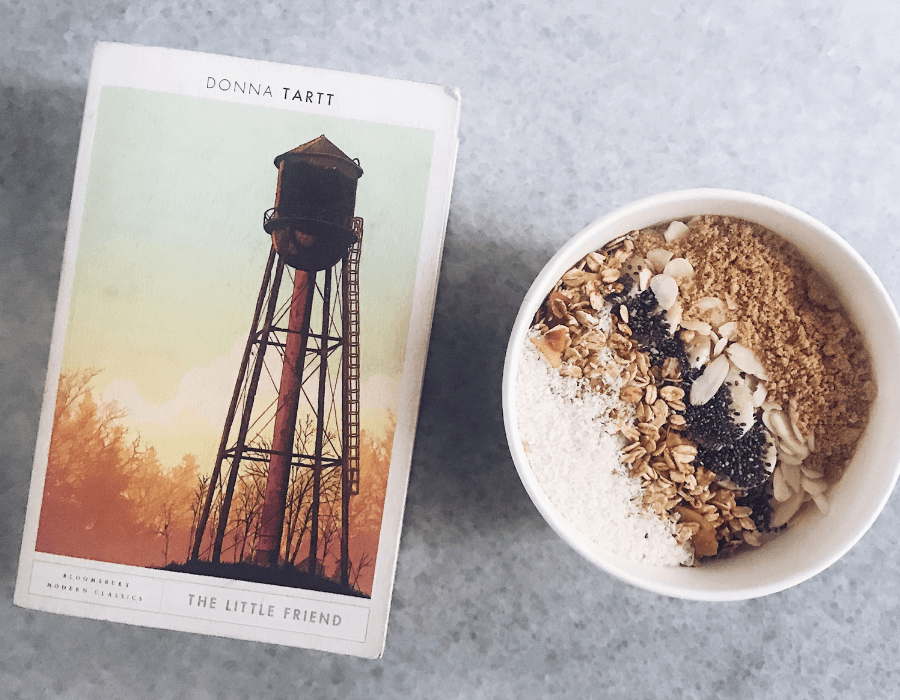 I bought The Little Friend by Donna Tartt while on a long weekend in Byron Bay. I was there for just over three days, and had figured that two books would suffice, but alas, by the penultimate afternoon I had finished both books. Not wanting to waste valuable beach time or an hour’s flight back to Sydney, I left the beach to peruse the shelves of my favourite book shop in Byron, The Book Room. Choosing a tome from one of their endless literary offerings is never an easy task, and had I thought about it sensibly beforehand, I probably wouldn’t have opted for a 700-page book given the challenge I had recently set myself to read ten books per month in 2019. And yet, enticed by the book’s beautifully illustrated Bloomsbury Classics cover, captivating blurb, and the knowledge that I’d rated both of Donna Tartt’s previous novels highly (The Goldfinch so much so that I missed by tube station by nine stops while reading it), I left with The Little Friend in tow.

A tale that balances on the periphery of gothic horror, murder mystery, literary fiction and thriller, The Little Friends is a story of the South, that begins with the death of twelve year-old Robin, who is found murdered in his back garden – hanging from a tree – on Mother’s Day. A harrowing event whose after-effects loom very largely on the family, his sister Harriet – who was a baby at the time of his death – takes it upon herself to track down his killers.

In the years that have passed since Robin’s death, Harriet’s mother has remained in a drug-induced slumber while her father moved to Nashville to escape his tragic past.

As the protagonist of this sad and sorrowful tale, Harriet is an old soul. Intelligent, indomitable, opinionated, quick and very well-read, the long, hot summer ahead without the constraints of either school or parental supervision school provide a fertile ground in which Harriet and her devoted schoolfriend, Hely, set out to find Robin’s killer.

Written with an evocative sense  of time and place, Tartt paints a rich picture of the decaying town in which the novel is set; a place that is ripe with casual and cruel racism, where the spectrum of social classes is divisive; and the thinking of the children and their fertile imaginations is front and centre of the story.

The ending is an ambiguous one; there are no firm solutions, nor resolutions, but the glimmer of hope the readers are left with offers a somewhat fitting finale to this fast-paced tale of woe.

About The Little Friend

The setting is Alexandria, Mississippi, where one Mother’s Day a little boy named Robin Cleve Dufresnes was found hanging from a tree in his parents’ yard. Twelve years later Robin’s murder is still unsolved and his family remains devastated. So it is that Robin’s sister Harriet – unnervingly bright, insufferably determined, and unduly influenced by the fiction of Kipling and Robert Louis Stevenson–sets out to unmask his killer. Aided only by her worshipful friend Hely, Harriet crosses her town’s rigid lines of race and caste and burrows deep into her family’s history of loss.

Donna Tartt is an American writer who received critical acclaim for her first two novels, The Secret History and The Little Friend, which have been translated into thirty languages. Tartt was the 2003 winner of the WH Smith Literary Award for The Little Friend. Her novel The Goldfinch won the Pulitzer Prize in 2014.

The daughter of Don and Taylor Tartt, she was born in Greenwood, Mississippi but raised 32 miles away in Grenada, Mississippi. At age five, she wrote her first poem, and she first saw publication in a Mississippi literary review at age 13.

Enrolling in the University of Mississippi in 1981, she pledged to the sorority Kappa Kappa Gamma. Her writing caught the attention of Willie Morris while she was a freshman. Following a recommendation from Morris, Barry Hannah, then an Ole Miss Writer-in-Residence, admitted Tartt into his graduate short story course where, stated Hannah, she ranked higher than the graduate students. Following the suggestion of Morris and others, she transferred to Bennington College in 1982, where she was friends with fellow students Bret Easton Ellis, Jill Eisenstadt, and Jonathan Lethem. At Bennington she studied classics with Claude Fredericks.

She divides her time between Virginia and New York City.