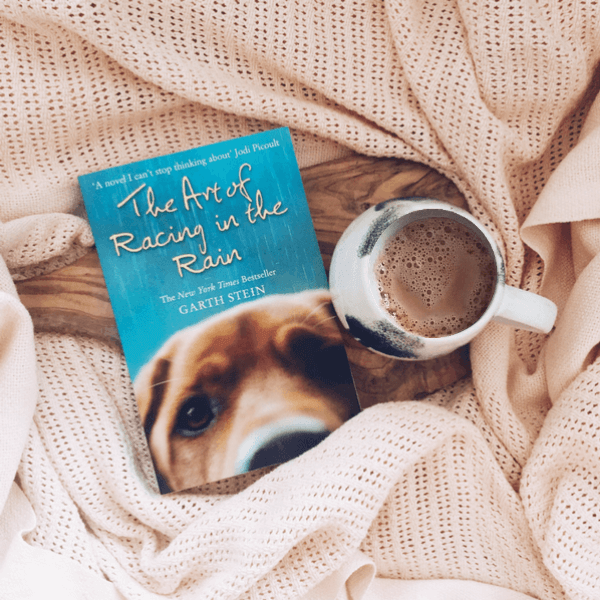 It would, of course, be a God-awful pun to say that I raced through Garth Stein’s The Art of Racing in the Rain, but it too, would be undeniably true. I can’t remember when I first heard about the book, suffice it to say, however, that the cover was a familiar one when I happened upon it in Byron. I went on something of a blue-book splurge, and The Art of Racing in the Rain was one of the books that made the purchase pile.

Written from the point of view of Enzo the dog, who belongs to aspiring race car driver Denny, his wife and young daughter, The Art of Racing in the Rain draws its reader in from the get go. While I wasn’t exactly sure how the tale would work – being narrated by a dog as it were – Enzo’s loveable and loyal nature makes for a unique telling of what turned out to be the best book I’ve read by a country mile this year.

Early on in the book, we learn that Enzo has a goal: to finish his life as a dog so that he can come back as a human, and no longer have to rely on gestures to communicate. But in this life he also has a purpose: to protect and support his master and his family as they experience a series of trials and tribulations. And while he might be restricted to gestures alone, those gestures offer his family more support than they fully realize, particularly in the aftermath of Denny’s wife’s illness.

What follows is a compelling story with an almighty twist that changes the events of Denny’s life as he knows it. And while testing times lie ahead for Enzo’s master, his faithful friend remains loyal and steadfast throughout, reinforcing the widely-held notion that dogs truly are a man’s best friend.

The Art of Racing in the Rain is not just a story about a dog, it is a story of human lives struck with joy, tragedy, failure, success, setbacks and the ultimate triumph over incredible adversity. It is a story of life and death, and how the two are inextricably linked together in all our lives. It is both a love story to our four-legged friends, and a vehicle through which they have been given a voice. An unputdownable and beautiful book, it is both heart-breaking and a must-read for dog-lovers far and wide. This book will change you, and it might just change the way you look at dogs, forever.

Garth Stein is the author of four novels: the New York Times bestselling gothic/historical/coming-of-age/ghost story, “A Sudden Light”; the internationally bestselling “The Art of Racing in the Rain”; the PNBA Book Award winner, “How Evan Broke His Head and Other Secrets”; and the magically realistic “Raven Stole the Moon.” He is also the author of the stage play “Brother Jones.” He has a dog, he’s raced a few cars, climbed a bunch of really tall trees, made a few documentary films, and he lives in Seattle with his family. He’s co-founder of Seattle7Writers.org, a non-profit collective of 74 Northwest authors working together to energize the reading and writing public.

About The Art of Racing in the Rain

Enzo knows he is different from other dogs: a philosopher with a nearly human soul (and an obsession with opposable thumbs), he has educated himself by watching television extensively, and by listening very closely to the words of his master, Denny Swift, an up-and-coming race car driver.

Through Denny, Enzo has gained tremendous insight into the human condition, and he sees that life, like racing, isn’t simply about going fast. On the eve of his death, Enzo takes stock of his life, recalling all that he and his family have been through.

A heart-wrenching but deeply funny and ultimately uplifting story of family, love, loyalty, and hope, The Art of Racing in the Rain is a beautifully crafted and captivating look at the wonders and absurdities of human life…as only a dog could tell it.