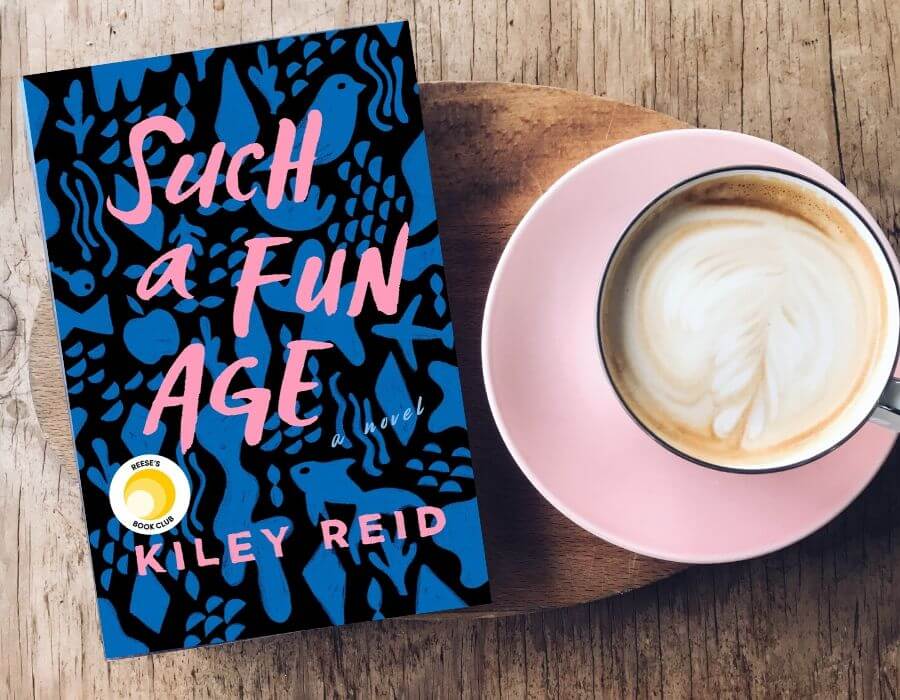 I was scrolling idly through Instagram (a habit of mine that I wish I could kick) when I saw a review of Kiley Reid’s Such A Fun Age; and the following day, a review copy arrived in the post – the sort of coincidence that led me to start the book the very next morning. With glowing reviews from everyone from Dolly Alderton to Jojo Moyes, and having been selected as Reese Witherspoon’s Hello Sunshine Book Club pick, I was eager to see what the fuss what all about.

Such a Fun Age opens with Emira, a twenty-five year-old babysitter struggling to navigate her next step in life, at a party celebrating a friend’s birthday. She’s called by Alix Chamberlain – a successful entrepreneur for whom she babysits – and, despite the late hour – is asked to take out her little girl Briar as there has been an incident at home. Emira agrees and after catching a cab to the Chamberlain’s, takes Briar to the local grocery store, but a confrontation soon ensues when she’s held by a security guard on suspicion of kidnapping Briar. It quickly becomes apparent that the issue at hand is that Emira is black, while Briar is white. Emira calls Alix’s husband, whose arrival swiftly diffuses the situation and, despite a fellow shopper filming the altercation, Emira wants to lay it to rest.

In the wake of the incident however, Alix Chamberlain sets about befriending her babysitter as a way to abate the guilt she feels at the way in which Emira was treated. What follows is a nimble tale that explores race, privilege, motherhood and betrayal, further complicated by a chance meeting that has a long-lasting impact on the blossoming friendship between Emira and Alex. The novel is also underpinned by the digital age in which we live, which subsequently leads to a social media furore and a climatic finale played out on screen.

An easy and enjoyable read that addresses important issues relevant to our time, I have no doubt that we’ll be seeing much more from writer Kiley Read in the not too distant future.

About Such a Fun Age

Alix Chamberlain is a woman who gets what she wants and has made a living showing other women how to do the same. A mother to two small girls, she started out as a blogger and has quickly built herself into a confidence-driven brand. So she is shocked when her babysitter, Emira Tucker, is confronted while watching the Chamberlains’ toddler one night. Seeing a young black woman out late with a white child, a security guard at their local high-end supermarket accuses Emira of kidnapping two-year-old Briar. A small crowd gathers, a bystander films everything, and Emira is furious and humiliated. Alix resolves to make it right.

But Emira herself is aimless, broke, and wary of Alix’s desire to help. At twenty-five, she is about to lose her health insurance and has no idea what to do with her life. When the video of Emira unearths someone from Alix’s past, both women find themselves on a crash course that will upend everything they think they know about themselves, and each other.

With empathy and piercing social commentary, Such a Fun Age explores the stickiness of transactional relationships, what it means to make someone “family,” the complicated reality of being a grown up, and the consequences of doing the right thing for the wrong reason.

Kiley Reid earned her MFA from the Iowa Writers’ Workshop, where she was awarded the Truman Capote Fellowship and taught undergraduate creative writing workshops with a focus on race and class. Her short stories have been featured in Ploughshares, December, New South, and Lumina. Reid lives in Philadelphia.

RELATED:  Review: How Do You Like Me Now - Holly Bourne

This is a great profile piece from Marie Claire Australia on the debut author that Reese Witherspoon in obsessed with, and I loved this video in which Kiley Reid shares three books she’s loved recently. This is also a great review of Such a Fun Age from The Guardian.

4 comments on “Review: Such a Fun Age – Kiley Reid”