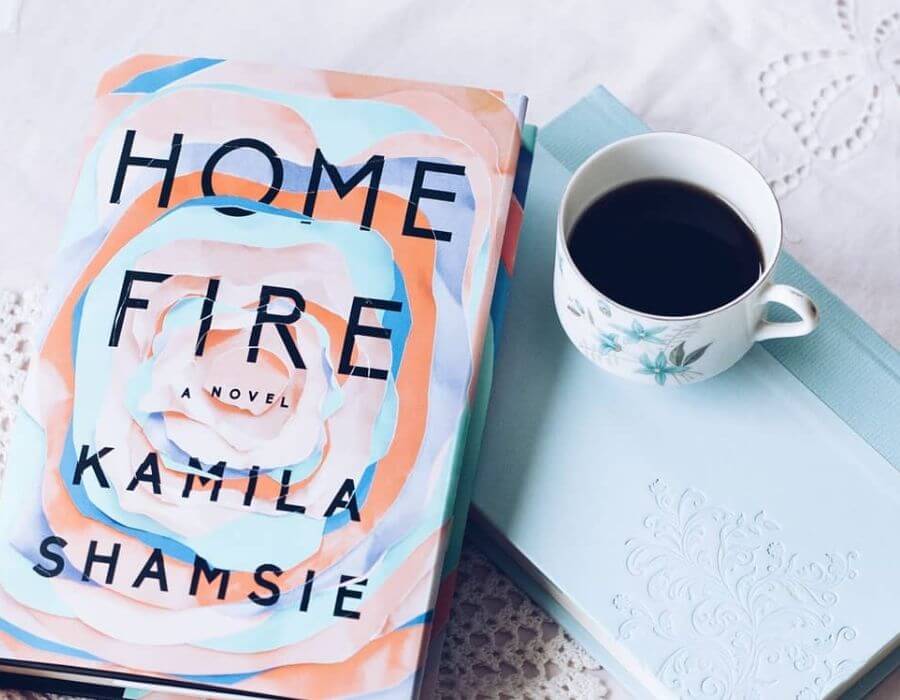 One of the hardest things about moving to Sydney was leaving my job working for the Women’s Prize for Fiction. A job I couldn’t have dreamed up even if I’d tried, I spent two glorious years championing women writers, and was also lucky enough to work alongside Kate Mosse, co-founder of the prize and a writer I had admired from afar for many years prior to meeting her.

I still follow the prize closely from Sydney, and do my best to read as much of the short and long-list as I can, but alas, as every ardent reader will know, it’s completely impossible to read everything recommended to you, and subsequently the 2018 winner, Home Fire by Kamila Shamsie, had slipped through my radar until last week. I was at my local bookshop, Gertrude & Alice, and as I was leaving Jane, the owner, gave me a copy, insisting I should read it. It was the type of Sydney day made for hunkering down with a book – torrential rain, looming grey skies, low clouds and a chill in the air; so I swiftly took myself home and readied myself for an afternoon of reading curled up on the coach.

While I had read A God in Every Stone when it was shortlisted for the Women’s Prize for Fiction in 2015, I had little recollection of what had happened in the book, and thus little idea of what to expect from Shamsie’s seventh novel, but as soon as I started it I was utterly enthralled, and it felt like I barely drew a breath from start to finish.

Home Fire revolves around orphaned siblings Isma and Aneeka, whose brother Parvaiz gets exploited and groomed into radicalism in the wake of their mother’s death. Shamsie cleverly depicts the ongoing manipulation of Parvaiz and allows the reader to see into the mind and heart of such a recruit; how badly he knew he erred, and how completely lost he felt, both unknowing and unable to fit back into life as he knew it before he attempts to follow in his late father’s footsteps by joining ISIS in Syria. The story speaks to nationalism, patriotism, and citizenship as a privilege, not as a birthright, and is a beautifully written tale that has been compared to both the Greek tragedy Antigone, and Shakespeare’s woeful tale of star-crossed lovers.

Weaving themes of love, familial ties, loyalty, betrayal, deceit, devotion, manipulation, radicalism, sacrifice, and so much more, Shamsie merges the personal with the political to deliver a heartbreaking tale, rich in beautiful prose and a haunting cast of characters that will leave you reeling at its gut-wrenching climax.

The suspenseful and heartbreaking story of an immigrant family driven to pit love against loyalty, with devastating consequences

Isma is free. After years of watching out for her younger siblings in the wake of their mother’s death, she’s accepted an invitation from a mentor in America that allows her to resume a dream long deferred. But she can’t stop worrying about Aneeka, her beautiful, headstrong sister back in London, or their brother, Parvaiz, who’s disappeared in pursuit of his own dream, to prove himself to the dark legacy of the jihadist father he never knew. When he resurfaces half a globe away, Isma’s worst fears are confirmed.

Then Eamonn enters the sisters’ lives. Son of a powerful political figure, he has his own birthright to live up to—or defy. Is he to be a chance at love? The means of Parvaiz’s salvation? Suddenly, two families’ fates are inextricably, devastatingly entwined, in this searing novel that asks: What sacrifices will we make in the name of love?

Kamila Shamsie was born in 1973 in Karachi, where she grew up. She has a BA in Creative Writing from Hamilton College in Clinton, NY and an MFA from the University of Massachusetts, Amherst. While at the University of Massachusetts she wrote In The City By The Sea , published by Granta Books UK in 1998. This first novel was shortlisted for the John Llewelyn Rhys Award in the UK, and Shamsie received the Prime Minister’s Award for Literature in Pakistan in 1999. Her 2000 novel Salt and Saffron led to Shamsie’s selection as one of Orange’s “21 Writers of the 21st Century.” With her third novel, Kartography , Shamsie was again shortlisted for the John Llewelyn Rhys award in the UK. Both Kartography and her next novel, Broken Verses , won the Patras Bokhari Award from the Academy of Letters in Pakistan. Burnt Shadows, Shamsie’s fifth novel, has been longlisted for the Orange Prize for Fiction. Her books have been translated into a number of languages.

Shamsie is the daughter of literary critic and writer Muneeza Shamsie, the niece of celebrated Indian novelist Attia Hosain, and the granddaughter of the memoirist Begum Jahanara Habibullah. A reviewer and columnist, primarily for the Guardian, Shamsie has been a judge for several literary awards including The Orange Award for New Writing and The Guardian First Book Award. She also sits on the advisory board of the Index on Censorship.

This is a great write up from the Guardian on Kamila Shamsie winning the Women’s Prize for Fiction for a story of our times.

I love the New York Times’ review of Home Fire, and this write up by Vogue is also well worth a read.