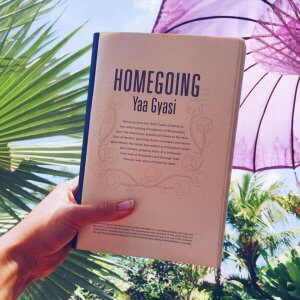 I only packed four books for my time in Bali – something of a catastrophic mistake given my tendency to devour them in their droves coupled with the alarming lack of books readily available on the island of Gods. In among the travel writing tomes and guides to Bali was Homegoing by Ya Gyasi – a book that I’d been recommended months previously by Stylist Magazine’s book writer and one that had been sitting despondently on my bedside table for a number of months.

The tale is set in eighteenth century Ghana and tells the story of two half-sisters – Effia and Esi – separated by forces beyond their control: one sold into slavery, the other married to a British slave trader. Spanning over two hundred years, while Effia resides in palatial comfort in Ghana, Esi is sold with thousands of others into the Gold Coast’s booming slave trade, and sent to America, where her descendants will be raised in slavery.

Each subsequent chapter alternately deals with the descendants of Effia and Esi, with Effia’s descendants mostly residing in Ghana, and Esi’s in the United States. Primarily, this novel is concerned with reverberating effects of slavery and colonialism throughout history.

A rich family saga that draws on the history and heritage of Africa, America, slavery, the war on drugs and police brutality, we witness the devastating impact such events can have on seven different generations.

A beautiful, haunting and powerful read – particularly given the current political unrest the world over surrounding both legal and moral issues of immigration – Homegoing is an astonishing debut, one that is rife with history and boasts both a rich cast of characters and a lingering effect. Hailed by many as a modern masterpiece, this sweeping tale will no doubt continue to win its author a legion of fans in years to come.