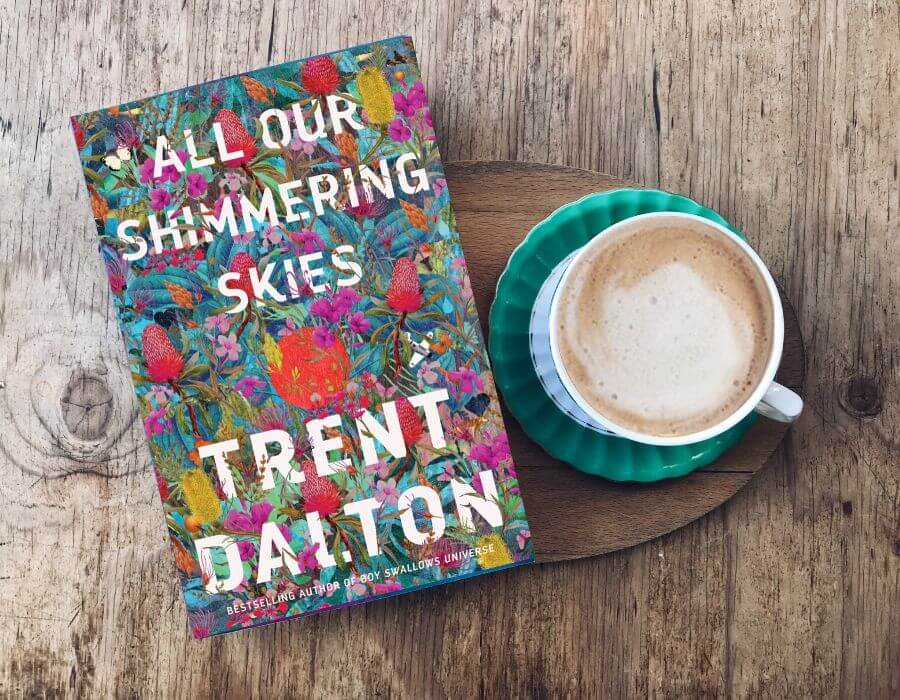 There are many reasons why a book might make it to the top of my ever-growing reading pile. Sometimes it’s a matter of timing; other times it might be because it’s been recommended it to me by someone whose opinion I trust. It can be because I like the sound of the blurb, and (more often than I care to admit) it’s simply because I love its cover. With All Our Shimmering Skies, it was a mingling of all of the above. That, combined with Trent Dalton being one of the nicest authors I’ve ever met, and the passion and verve he spoke with about his newest book at the Harper Collins Literary Bites Salon, meant it was nigh impossible not to go home and start reading it immediately.

There’s little doubt that the much-loved author has big boots to fill with All Our Shimmering Skies. Set to be published in June 2020, two years after his beloved debut – Boy Swallows Universe – a novel which not only won an unprecedented five Australian Book Industry Awards but also became the fastest selling Australian fiction debut since Nielsen BookScan records began – has meant that Trent has amassed a legion of loyal fans all over Australia, eagerly awaiting his next offering. At the Harper Collins event, publisher Catherine Milne said of the new book: “It’s a buoyant, beautiful and magical novel abrim with warmth, wit and wonder, a love letter to Australia and the art of looking up.”, while Trent told us that he was inspired by both his relationship with his late father, and his two young daughters to write the book that will undoubtedly go on to capture the hearts of readers across the country.

Beautifully written, wonderfully imagined and utterly unputdownable, All Our Shimmering Skies is set in Australia’s Northern Territory and tells the tale of Molly Hook, the gravedigger’s daughter and the quest for the man who put a curse on her family. Rich with a sense of setting – heavily influenced by Trent’s own travels – it’s a magical nod to Australia’s endless wonder and beauty, and features a cast of unforgettable characters that will stay with the reader long after its ending.

One of the things I loved most about All Our Shimmering Skies was the way in which Trent’s signature playfulness, warmth and passion really shone through the writing – while it’s an entirely different book to his first, fans of Boy Swallows Universe will delight in the fantastical nature of All Our Shimmering Skies; in the fusion of fiction with fantasy in this tale of good versus evil, in the intimate narrative and in the way in which the brutal and the beautiful are twin strands of the same thread.

A complex, extraordinary, ambitious book, All Our Shimmering Skies fuses Trent’s wonderful prowess for language with a spellbinding plot and a riveting, pacy ride through Australia’s wide terrain. Triumphant, captivating and brilliantly Australian, it is everything and more fans of Boy Swallows Universe have been waiting for.

About All our Shimmering Skies

Darwin, 1942, and as Japanese bombs rain down, motherless Molly Hook, the gravedigger’s daughter, turns once again to the sky for guidance. She carries a stone heart inside a duffel bag next to the map that leads to Longcoat Bob, the deep-country sorcerer who put a curse on her family. By her side are the most unlikely travelling companions: Greta, a razor-tongued actress and Yukio, a fallen Japanese fighter pilot. Run, Molly, run, says the daytime sky. Run to the vine forests. Run to northern Australia’s wild and magical monsoon lands. Run to friendship. Run to love. Run. Because the graverobber’s coming, Molly, and the night-time sky is coming with him. So run, Molly, run.

All Our Shimmering Skies is a story about gifts that fall from the sky, curses we dig from the earth and the secrets we bury inside ourselves. It is an odyssey of true love and grave danger, of darkness and light, of bones and blue skies; a buoyant, beautiful and magical novel abrim with warmth, wit and wonder; and a love letter to Australia and the art of looking up.

RELATED:  Six of the best: books for her

Trent Dalton writes for the award-winning The Weekend Australian Magazine. A former assistant editor of The Courier-Mail, he has won a Walkley, been a four-time winner of the national News Awards Feature Journalist of the Year Award, and was named Queensland Journalist of the Year at the 2011 Clarion Awards for excellence in Queensland media. His writing includes several short and feature-length film screenplays. His latest feature film screenplay, Home, is a love story inspired by his non-fiction collection Detours: Stories from the Street (2011), the culmination of three months immersed in Brisbane’s homeless community, the proceeds of which went back to the 20 people featured within its pages. His journalism has twice been nominated for a United Nations of Australia Media Peace Award, and his debut novel Boy Swallows Universe was published in 2018.

Trent also hosted the ABC Conversations show while Richard Fidler was on a Churchill Fellowship.