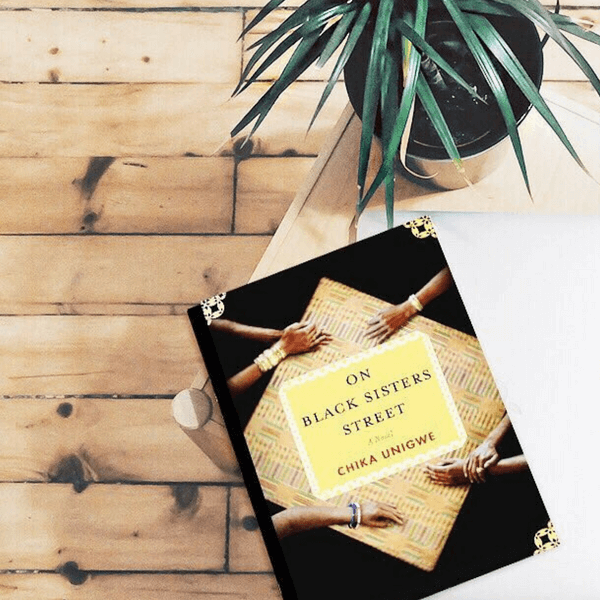 On our third evening at The Hurst, The Arvon Foundation’s scenic centre in Shropshire, we were lucky enough to have writer Chika Unigwe as a guest speaker. Nigerian Chika now resides in Belgium with her husband and four children and is the winner of the 2003 BBC Short Story Competition, A Commonwealth Short Story Award and a Flemish literary prize for ‘De Smaak van Sneeuw’.

I was both impressed and inspired by Chika’s style of writing and wanting to read one of her novels in full, began On Black Sisters’ Street during my time at The Hurst.

During our time with Chika we had a Q&A session in which we were able to ask for writing tips and advice and amongst other subjects we discussed the way in which she conducted her research for On Black Sisters’ Street. And unlike many authors, whose research goes no further than their desk, Chika visited the heart of the red-light district in Antwerp to find out more about the place which was to form the bright and seedy backdrop to her second novel.

On Black Sisters’ Street follows the lives of four Nigerian women – Sisi, Efe, Ama and Joyce – all of whom have left behind their native Africa to make a living as sex-workers in Belgium. As the plot develops, Chika breathes life into the existence of these four women, who are ‘Persona non grata’ in Belgium; void of both legal and moral rights.

As the story progresses, the reader learns more about each of the four women’s backgrounds and the individual tragedies which have taken them to the streets of Antwerp.

Chika’s writing is both beautiful and evocative and it offers a perfect contrast to the always harrowing, and often grotesque stories that are woven through the text. It is a haunting, beautiful read that explores the injustice many women face today in a world that is far from still equal. A thought-provoking novel, On Black Sisters’ Street deals with issues of naivety, humiliation, rape and forgotten dreams; leaving the reader questioning the luck of their own fate and their prejudices of others.

About On Black Sister’s Street

On Black Sisters Street tells the haunting story of four very different women who have left their African homeland for the riches of Europe—and who are thrown together by bad luck and big dreams into a sisterhood that will change their lives.

Each night, Sisi, Ama, Efe, and Joyce stand in the windows of Antwerp’s red-light district, promising to make men’s desires come true—if only for half an hour. Pledged to the fierce Madam and a mysterious pimp named Dele, the girls share an apartment but little else—they keep their heads down, knowing that one step out of line could cost them a week’s wages. They open their bodies to strangers but their hearts to no one, each focused on earning enough to get herself free, to send money home or save up for her own future.

Then, suddenly, a murder shatters the still surface of their lives. Drawn together by tragedy and the loss of one of their own, the women realize that they must choose between their secrets and their safety. As they begin to tell their stories, their confessions reveal the face in Efe’s hidden photograph, Ama’s lifelong search for a father, Joyce’s true name, and Sisi’s deepest secrets—-and all their tales of fear, displacement, and love, concluding in a chance meeting with a powerful, sinister stranger.

RELATED:  Review: The House Between the Tides - Sarah Maine

On Black Sisters Street marks the U.S. publication debut of Chika Unigwe, a brilliant new writer and a standout voice among contemporary African authors. Raw, vivid, unforgettable, and inspired by a powerful oral storytelling tradition, this novel illuminates the dream of the West—and that dream’s illusion and annihilation—as seen through African eyes. It is a story of courage, unity, and hope, of women’s friendships and of bonds that, once forged, cannot be broken.

Chika Unigwe was born in Enugu, Nigeria, and now lives in Turnhout, Belgium, with her husband and four children. She writes in English and Dutch.

In April 2014 she was selected for the Hay Festival’s Africa39 list of 39 Sub-Saharan African writers aged under 40 with potential and talent to define future trends in African literature.
.
Unigwe holds a BA in English Language and Literature from the University of Nigeria, Nsukka, and an MA from the Catholic University of Leuven, Belgium. She also holds a PhD from the University of Leiden, The Netherlands, having completed a thesis entitled “In the shadow of Ala. Igbo women writing as an act of righting” in 2004.