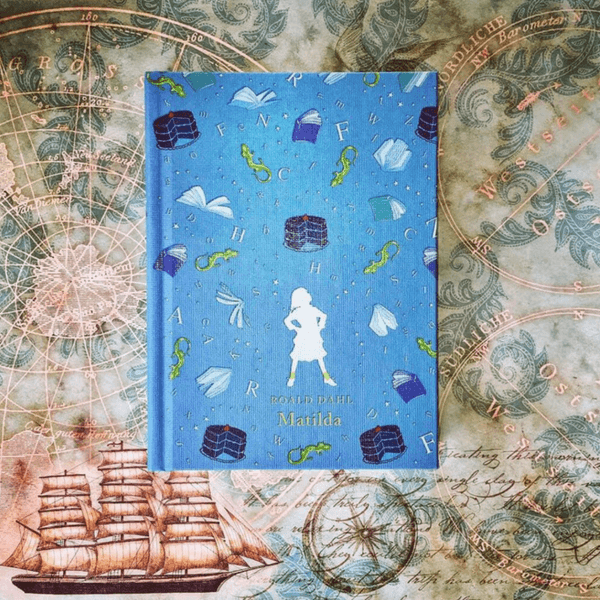 When I first decided to work my way through the BBC’s Big Read, I wanted to do a thorough job – thus no half-hearted attempts or unfinished books are permitted. I’m sure that at some point during my childhood I read Matilda, but in the name of being thorough, when placing my most recent order on Amazon, I included Matilda in the line-up.

Without wanting to sound horribly tacky, the first thing that struck me about this book was the similarities between myself and Matilda. I may not have had the ghastly parents, but I did have a love of reading instilled in me from a very young age, much like the protagonist in this novel. Growing up in a small town in Sussex, I remember walking to my local library every Saturday aged seven and stocking up on books for the week; I can still recall the glee I felt when I was told that the borrowing limit had been extended from three books to seven. And while I certainly wasn’t reading Dickens, books absolutely played a big part in my childhood and have continued to do so throughout my adult life.

London’s Evening Standard has recently launched a literacy campaign hoping to ‘get London reading’ on the back of recently published statistics. One in four children under five have a TV in their bedroom, and one in five children leave primary school without being able to read properly. Thus, while this novel was published almost twenty-five years ago, it’s message is as poignant as ever.

The tale is a charming one; Matilda’s parents neither own nor have they read, a single book between them, indeed like much of modern society they spend their time slobbed in front of the TV and have no interest in reading. At school she is befriended by her teacher Miss Honey – the niece of the evil Headmistress Miss Trunchball – who discovers that Matilda has an incredible gift and is far ahead of her years in terms of intelligence.  When Miss Honey tries to notify Matilda’s parents, they remain uninterested, as does Miss Trunchball. And thus forms an unlikely friendship between teacher and pupil, with a very happy ending.

Matilda Wormwood’s father thinks she’s a little scab. Matilda’s mother spends all afternoon playing bingo. And Matilda’s headmistress Miss Trunchbull? Well, she’s the worst of all. She is a big bully, who thinks all her pupils are rotten and locks them in the dreaded Chokey. As for Matilda, she’s an extraordinary little girl with a magical mind – and now she’s had enough. So all these grown-ups had better watch out, because Matilda is going to teach them a lesson they’ll never forget.

The son of Norwegian parents, Roald Dahl was born in Wales in 1916 and educated at Repton. He was a fighter pilot for the RAF during World War Two, and it was while writing about his experiences during this time that he started his career as an author.

His fabulously popular children’s books are read by children all over the world. Some of his better-known works include James and the Giant Peach, Charlie and the Chocolate Factory, Fantastic Mr Fox, Matilda, The Witches, and The BFG.