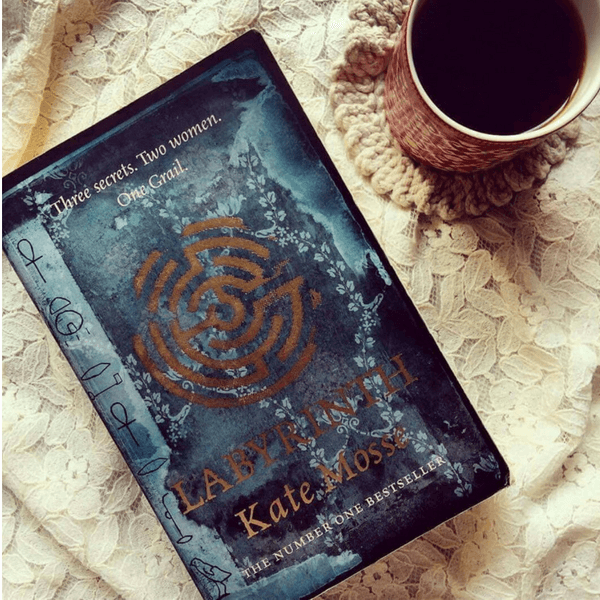 I inherited a love of France from my father and have always had a very romanticised view of the country; I love the language, the food, the countryside and the culture. Thus I have always enjoyed reading novels set across the channel – indeed one of the reasons I love Joanne Harris so much are her enchanting descriptions of French life. As I also enjoy historical literature when I was lent this novel by a friend I eagerly devoured it from cover to cover – despite it’s somewhat sizeable length.

Set in two different time zones 800 years apart, Labyrinth follows herbalist and healer Alais in 1209 as she tries to protect the secret of The Holy Grail and later Dr Alice Tanner who discovers the body of two skeletons at an archeological site in southern France in 2005.  Rich in the heritage of both historical and modern France, Mosse’s writing is hugely atmospheric and wonderfully descriptive, bringing medieval Carcassonne to life.

Despite having been born centuries apart, Alais and Alice have much in common; and it soon becomes apparent that their lives are inexplicably linked and the women share a common destiny. The plot is intricately woven and littered with pieces of a jigsaw that cleverly slots together as the novel progresses. Labyrinth is the sort of novel that is so meticulously researched; a feat evident in every page the reader turns. Both a stunning tale and history lesson in one, Mosse’s skill at weaving timelines centuries apart, painting multi-layered and well thought out characters and telling a masterful story to boot, show why she’s often considered as one of today’s most brilliant authors.

With spectacular descriptions of the French landscape, themes of religion and history in abundance, and an inspiring plot, Labyrinth is literary craftsmanship at its best.

In the Pyrenees mountains near Carcassonne, Alice, a volunteer at an archaeological dig, stumbles into a cave and makes a startling discovery-two crumbling skeletons, strange writings on the walls, and the pattern of a labyrinth. Eight hundred years earlier, on the eve of a brutal crusade that will rip apart southern France, a young woman named Alais is given a ring and a mysterious book for safekeeping by her father. The book, he says, contains the secret of the true Grail, and the ring, inscribed with a labyrinth, will identify a guardian of the Grail. Now, as crusading armies gather outside the city walls of Carcassonne, it will take a tremendous sacrifice to keep the secret of the labyrinth safe.

Kate Mosse is an international bestselling author with sales of more than five million copies in 42 languages. Her fiction includes the novels Labyrinth (2005), Sepulchre (2007), The Winter Ghosts (2009), and Citadel (2012), as well as an acclaimed collection of short stories, The Mistletoe Bride & Other Haunting Tales (2013). Kate’s new novel, The Taxidermist’s Daughter is out now.
Kate is the Co-Founder and Chair of the Board of the Baileys Women’s Prize for Fiction (previously the Orange Prize) and in June 2013, was awarded an OBE in the Queen’s Birthday Honours List for services to literature. She lives in Sussex.