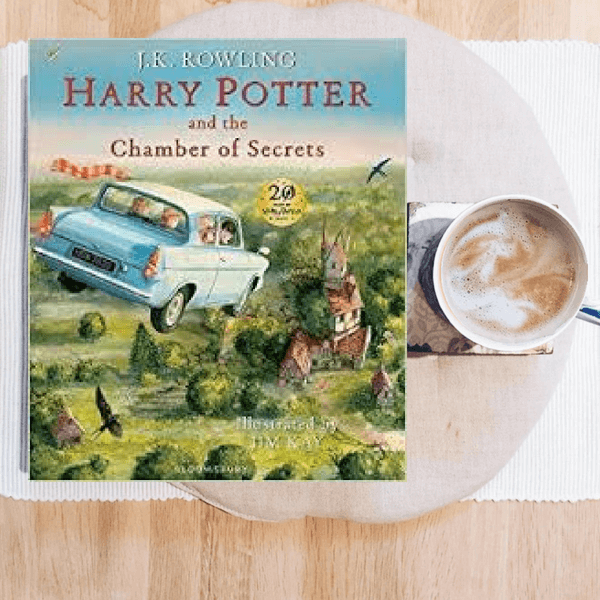 As soon as I finished Harry Potter and the Philosopher’s Stone, I was desperate to read the next instalment, and unable to source one to borrow, on a particularly dismal evening last week, I visited my local Waterstones in Clapham to get my next Harry Potter fix.

Having been plagued by man-flu since running my first half marathon last Sunday in aid of MIND, I have had a great deal of spare time on my hands, having had to cancel all social engagements for the past week, for fear of infecting anyone else. Thus, most of my evenings have been spent in bed, armed with a hot water bottle, a steaming mug of Lemsip and of course, Harry Potter and the Chamber of Secrets.

Harry Potter and The Chamber of Secrets is the second instalment in J. K. Rowling’s series, ranking at number 23 in the BBC’s Big Read. Published in 1998, the plot follows Harry’s second year at Hogwarts, were he returns despite being warned not to by house-elf Dobby, who visits him at his Aunt and Uncle’s house over the summer holidays. Harry politely disregards the caution and insists that he will be returning to Hogwarts, which then sees Dobby causing chaos in the Dursley household and Harry, punished accordingly, is locked in his bedroom. It is up to the Weasley brother’s to save him, by mode of flying car, and Harry then spends the remainder of the holidays at their higgledy-piggledy cottage.

As soon as term starts, strange-goings on begin, and unable to enter Platform 9 3/4 as usual, Ron and Harry once more fly the Weasley car, this time to Hogwarts. Having previously encountered Gilderou Lockhart at a book-signing in Diagon Alley while shopping for school supplies over the summer, Harry, Ron and Hermione soon discover that he is to be their teacher of Defense Against the Dark Arts. Hugely narcissistic, Lockhart covets fame and takes an immediate liking to Harry, believing them to be of similar dispositions.

As the plot develops, a number of attacks take place at the school, leaving victims ‘petrified’ and near dead. Taking the mystery of The Chamber of Secrets into their own hands, Harry, Ron and Hermione delve deeper into the school’s history in the hope of unearthing the perpetrator of the crimes. However, when Hermione becomes one of the latest victims and Ginny Weasley is thought dead, time is running out for Harry and Ron to save both their loved ones from danger, and their beloved school from disrepute.

There was much speculation that J. K. Rowling was afraid that Harry Potter and The Chamber of Secrets would not live up to the hype created by her debut. However, such a worry was unfounded as the follow on further cements the series as one that will be loved by its readers for a long time yet.

About Harry Potter and the Chamber of Secrets

The Dursleys were so mean and hideous that summer that all Harry Potter wanted was to get back to the Hogwarts School for Witchcraft and Wizardry. But just as he’s packing his bags, Harry receives a warning from a strange, impish creature named Dobby who says that if Harry Potter returns to Hogwarts, disaster will strike

And strike it does. For in Harry’s second year at Hogwarts, fresh torments and horrors arise, including an outrageously stuck-up new professor, Gilderoy Lockhart, a spirit named Moaning Myrtle who haunts the girls’ bathroom, and the unwanted attentions of Ron Weasley’s younger sister, Ginny.

But each of these seem minor annoyances when the real trouble begins, and someone — or something — starts turning Hogwarts students to stone. Could it be Draco Malfoy, a more poisonous rival than ever? Could it possibly be Hagrid, whose mysterious past is finally told? Or could it be the one everyone at Hogwarts most suspects . . . Harry Potter himself?

1 comment on “Review: Harry Potter and the Chamber of Secrets – J.K. Rowling”