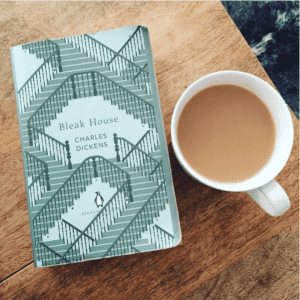 Attempting to read Bleak House by Charles Dickens while in the sweltering Balanese heat turned out to be something of a challenge – poolside reading Dickens is not – so despite being half way the 1000 page novel by the time I arrived in Ubud, I barely touched it while I was away.

First published as a serial between March 1852 and September 1853, and is considered to be one of Dickens’ finest novels, containing vast, complex and engaging arrays of characters and sub-plots. With five entries on the BBC Top 100 – Great Expectations, David Copperfield, A Christmas Carol and A Tale of Two Cities, Bleak House was the final Dickensian tome to tick off the list before I finish my challenge.

At the heart of the novel is the Chancery court case of Jarndyce v Jarndyce and was deemed by many as an attack on the British court system. Narrated in part by the orphaned Esther, and in part by an unidentified, third-person narrator, it is regarded by many as Dickens’ finest novel. With a plot that fuses a love story with mystery, social satire and morality issues it is a dense and complex read, that perfectly showcases Dickens’ storytelling skills.