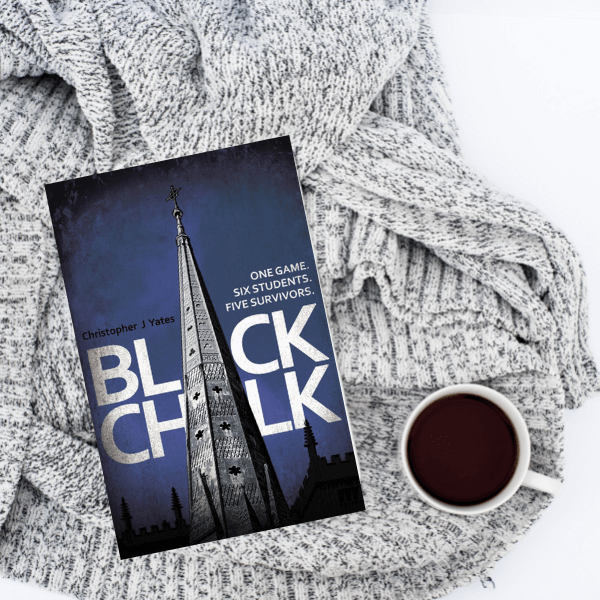 They say never judge a book by its cover, and never has the case been truer than with Black Chalk – indeed when I first saw a copy of Christopher J Yates’ debut novel I immediately thought it was more of a ‘boys book’, and consequently had no huge desire to read it. It was only when, a week later, Black Chalk was given a rave review in Stylist that I decided to read it.

Black Chalk tells the tale of six friends in their first year at Oxford University – each of them with their own idiosyncrasies – who embark on a game of consequences. The game begins in earnest when some of the students stumble across the Game Soc at the fresher’s fair; a stall manned by fellow students – Tallest, Middle and Shortest – the young men agree to offer a cash prize to the winner.

But what begins as harmless fun quickly escalates into all out psychological warfare as the dares become more dangerous; the consequences more humiliating. The dynamics in the group shift as friendships break down and betrayals are cast with the players ruthlessly exploiting their growing intimacy to find the soft spots in each others defences.

The campus setting of Black Chalk was highly evocative and added to the tension of what is a superbly written novel by any standard – that it comes from a debut novelist makes it all the more impressive. The characters were both hugely believable and finely drawn out, and the plot had me gripped from the first page.

Both enthralling and sinister in equal measures, Black Chalk is the finest kind of thriller about and is sure to have won its author, Christopher J Yates, a legion of fans. I certainly hope it won’t be the last we hear from him.

It was only ever meant to be a game played by six best friends in their first year at Oxford University; a game of consequences, silly forfeits, and childish dares. But then the game changed: The stakes grew higher and the dares more personal and more humiliating, finally evolving into a vicious struggle with unpredictable and tragic results. Now, fourteen years later, the remaining players must meet again for the final round. Who knows better than your best friends what would break you?

Christopher J. Yates was born and raised in Kent and studied law at Oxford University before working as a puzzle editor in London. He now lives in New York City with his wife and dog.