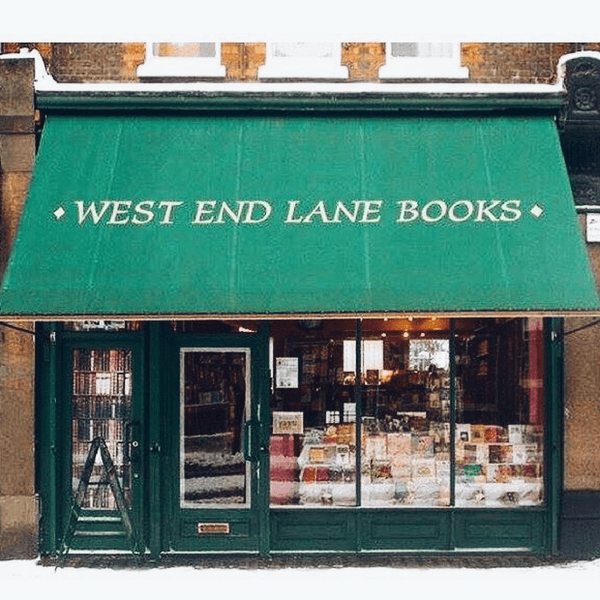 West Hampstead, in North West London, is a mere ten-minute tube ride into town yet it has a real
village feel. There are some chains, such as Gail’s, Nando’s and Joy but there are also lots of
independents. And if you’re a lover of charity shops, then West End Land (which is West
Hampstead’s high street) is the place to be. Cancer Research UK, Scope, The Children’s Society, All
Aboard and Oxfam all have shops on the high street. It’ll satiate even the most ardent bargain lover.
The real jewel in the crown, however, is West End Lane Books.

Family owned and “fiercely independent” since 1994, West End Lane Books is THE bookshop to go to
for all your literary needs. And they’ll ever throw in some banter for free. Just check out their Twitter
feed if you don’t believe me. Not only are their book recommendations great, they also know what’s hip (and what’s not) and what book to buy for that ten-year old’s birthday. And they also stock awesome cards and even wrapping paper. Gifts sorted!

They don’t just sell books though. They also organise fabulous events such as reading and
meditation evenings, book signings, ‘meet the author’, and storytime for toddlers. In fact, I have a
great story about the latter.

A few years ago, I was sat across the road from the bookshop having my hair done. I saw on Twitter
that it was storytime at West End Lane books and replied to their tweet saying I wish I could join.
Cue 10 minutes later and Danny turns up at the hairdresser to read me a story! You cannot make
this up. She asked if she could take a photo, presumably to tweet, but I declined as I had a head full
of foil and an image to uphold!

That story just sums up everything about West End Lane Books. They love their customers, they love
their community, they’re passionate about books and they’re slightly nuts (in a good way!). The
community loves them too – they’ve been open for 24 years!

So, if you’re in the area – or even if you aren’t, go anyway – pop in to West End Lane Books, peruse
their great selection, ask for a recommendation, buy a book and then go read it in one of the great
cafes. If you go on a Saturday, then you get the added bonus of the Farmer’s Market.