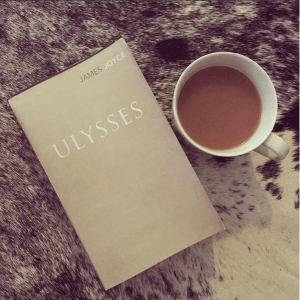 In hindsight, leaving Ulysses for the penultimate read from my BBC Big Read challenge wasn’t the wisest decision. I was very aware of the book’s reputation; despite being hailed by novelist Anthony Burgess as the greatest novel of the 20th century; it has also been described by the Guardian – and indeed many of its would-be readers – as the hardest novel to finish. On Goodreads ‘Most difficult novel’ list, Ulysses took the top spot; the bookseller I bought it from at Dymocks insisted I pop back in at the end of each chapter so he could talk me through what had happened and my friend Jonny expressed his shock that I was trying to read it in a week, on account that students at Trinity spend a year studying it.

And thus it was with a serious amount of trepidation that I began Joyce’s most notorious novel a week ago, at 5am one morning, with the hope of making a serious dent in it before work. I had heard great reviews from my friends Tom and Greg – both of whom I hold in pretty high esteem when it comes to all things literary – so I had high hopes that I would see what they and many others saw – that is, Ulysses as a great work of literature. Alas, it wasn’t to be.

While I appreciate Joyce’s use of language, Ulysses for me made little sense and finishing the 652 pages was more painful, and far more of a challenge, than finishing the London Marathon. Lexically dense throughout, there was something of a respite in the final third of the book where the words on the page became more sparse, only to find the final chapter – all 36 pages of it – contained not a single punctuation mark.

There is much to be said on the way in which I read it – had I the time to spend a year reading it at leisure – maybe my opinion would have been different. But, ultimately, reading for me is about pleasure, escapism and delight – none of which, I’m sad to say, I found within the pages of Ulysses. I finished it sitting on a bench half way between Bronte and Bondi; the relief was huge, as was the temptation to throw it into the sea. Instead, I left it, in the hope that its next reader might take from it slightly more than I did.