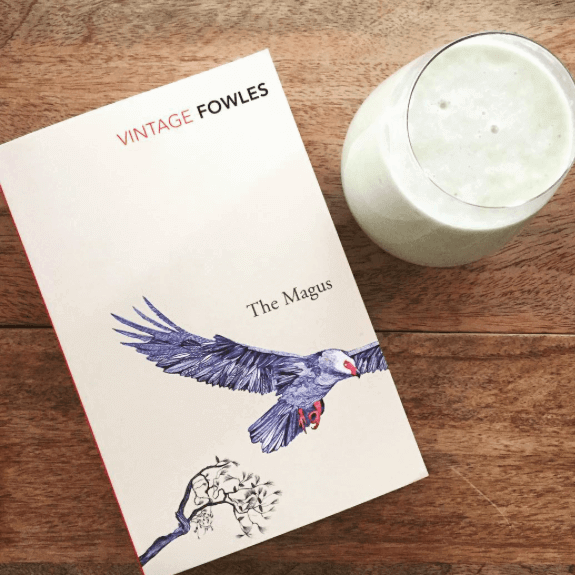 I had all but written off the final five of the BBC Big Read. With the exception of Lord of the Rings – a book I hope to enjoy given its top ranking on the list – the remaining four certainly didn’t fill me with joy. Two of them were sic-fi; a genre that I don’t think I’ll ever be a fan of, one of them Ulysses – a book cited by many as one of the most lexically dense novels ever written, and the fourth and final was The Magus, a book I knew almost nothing about.

The only time The Magus has been on my radar since beginning my challenge, was a number of years ago when I was working for a boutique PR agency in Chiswick. One of our clients was Harlequin – the publishing house that owns Mills & Boon – and an author on their books told me it was her favourite novel. I’m not entirely sure why I left it until the final three, other than simply to say I had no reason to read it sooner.

First published in 1965 by British author John Fowles, The Magus tells the tale of Nicholas Urfe, a young Oxford graduate who, after a short-lived relationship with an Australian called Alison, takes a job teaching at a private boys’ school on a beautiful Greek Island, Phraxos. Shortly after taken up the teaching position, Urfe discovers a remote villa while exploring the island. Owned by Conchis; an elderly man with enormous wealth, hypnotic presence, and mysterious background; indeed the Magus of the story, Nicholas is enticed into a series of surreal, often fascinating, and bewildering events, the reality and meaning of which continually elude both Nicholas and the reader. He soon finds himself the victim of manipulative games and masquerades and is led on a journey beyond his wildest imaginings. Alison later reappears in the story along with many new and mysterious characters, most notably a phantom-like young woman with whom Nicholas falls in love.

A tale almost impossible to explain due to its many complexities and the distortion of reality within its pages, The Magus is a compelling and profound novel that will grip you until the final page. That I enjoyed it so thoroughly having had little – if any – prior expectations for the book made it all the more sweeter.

Buy The Magus by John Fowles on Amazon or from Waterstones.

On a remote Greek Island, Nicholas Urfe finds himself embroiled in the deceptions of a master trickster. As reality and illusion intertwine, Urfe is caught up in the darkest of psychological games. John Fowles expertly unfolds a tale that is lush with over-powering imagery in a spellbinding exploration of human complexities. By turns disturbing, thrilling and seductive, The Magus is a feast for the mind and the senses.

John Fowles was born in 1926. He won international recognition with The Collector, his first published title, in 1963. He was immediately acclaimed as an outstandingly innovative writer of exceptional imaginative power, and this reputation was confirmed with the appearance of his subsequent works: The Aristos, The Magus, The French Lieutenant’s Woman, The Ebony Tower, Daniel Martin, Mantissa, and A Maggot. John Fowles died in Lyme Regis in 2005. Two volumes of his Journals have recently been published; the first in 2003, the second in 2006.