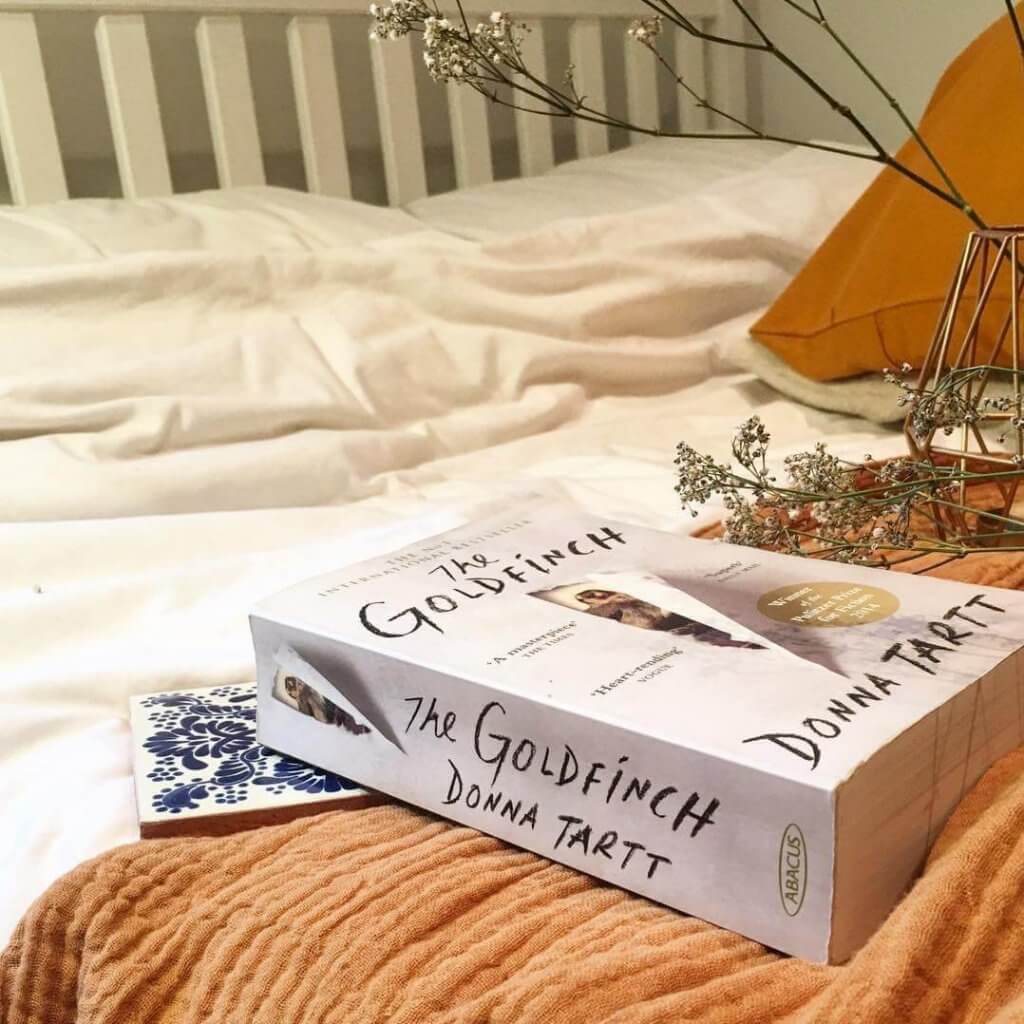 I first heard of Donna Tartt many years ago. Newly graduated, I was interning at Bloombsury when someone recommended I read her debut novel, The Secret History. I was to later discover it was on the BBC’s Big Reads and indeed I thoroughly enjoyed it when I finally got around to reading it, some months after my internship at Bloomsbury ended.

Tartt later went on to release My Little Friend, after which there was an eleven year wait before The Goldfinch was published last year. As expected with such a heralded author, the book was met with high critical acclaim and so I swiftly added it to my Christmas wishlist. And so it was that having finished The Shock of the Fall, and knowing I needed something seriously good to follow it that I began Tartt’s third novel.

There is always the fear surrounding a long-awaited book that it simply won’t live up to its hype; though any concern that this would be true of The Goldfinch was swiftly abated.

Narrated by Theo Decker, the story opens in an Amsterdam hotel before moving back fourteen years to the day his mother dies, when Theo is on the cusp of manhood. They are visiting the New York Metropolitan Museum and are in separate rooms when a bomb goes off, killing Theo’s mother instantly. Theo returns home, having removed The Goldfinch – his mother’s favourite painting – from the debris of the museum, expecting to find his mother at their apartment only to be faced with the stark reality that she is dead.

What follows is the slow disintegration of life as Theo knows it. Initially looked after by the Barbours – a wealthy yet dysfunctional family of a classmate, he also befriends a local antiques dealer – the hugely likeable Hobbie, whose business partner also died in the explosion. Just as Theo adjusts to life with the Barbours his wayward father turns up with his new girlfriend in tow; and instructs Theo he’ll be moving to Las Vegas with them. In Vegas he meets Boris – a Ukrainian outsider with whom Theo develops a deep friendship and a penchant for both Russian vodka and illegal drugs.

The novel follows Theo as he passes from boyhood to adulthood, returning to his native New York. The painting of the Goldfinch remains at the very forefront of his mind – both as a thing of beauty and a constant reminder or his mother and is indeed the one constant in his life right until the novel’s last page.

At 770 pages or thereabouts, The Goldfinch is no quick read. Carrying it around with me proved endlessly tiresome but I simply could not put it down. So engrossed was I towards its climatic end that when on a tube home, rather than getting off at Baker Street I found myself in Pinner – five stops from Watford and somewhat dazed and confused.

Both astonishing and profound, The Goldfinch has been hailed by many as a modern masterpiece, and it is quite abundantly clear to see why.

It begins with a boy. Theo Decker, a thirteen-year-old New Yorker, miraculously survives an accident that kills his mother. Abandoned by his father, Theo is taken in by the family of a wealthy friend. Bewildered by his strange new home on Park Avenue, disturbed by schoolmates who don’t know how to talk to him, and tormented above all by his unbearable longing for his mother, he clings to one thing that reminds him of her: a small, mysteriously captivating painting that ultimately draws Theo into the underworld of art.

As an adult, Theo moves silkily between the drawing rooms of the rich and the dusty labyrinth of an antiques store where he works. He is alienated and in love-and at the center of a narrowing, ever more dangerous circle.

The Goldfinch combines vivid characters, mesmerizing language, and suspense, while plumbing with a philosopher’s calm the deepest mysteries of love, identity, and art. It is an old-fashioned story of loss and obsession, survival and self-invention, and the ruthless machinations of fate.

Donna Tartt is an American writer who received critical acclaim for her first two novels, The Secret History and The Little Friend, which have been translated into thirty languages. Tartt was the 2003 winner of the WH Smith Literary Award for The Little Friend. Her novel The Goldfinch won the Pulitzer Prize in 2014.