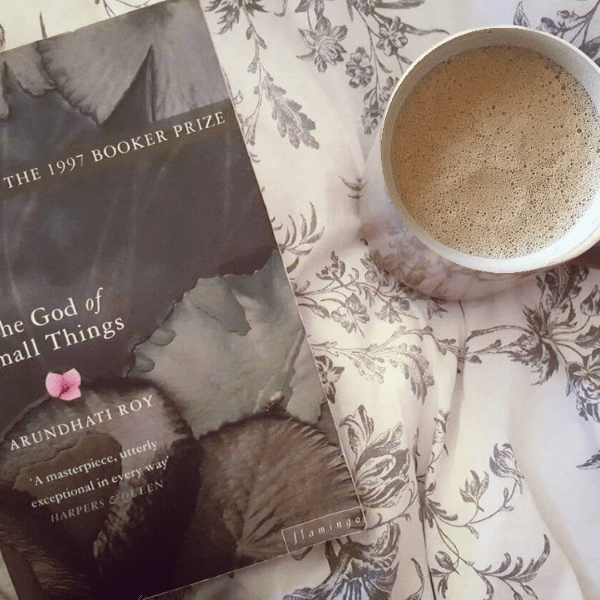 Recently I began working at the publishers Bloombsury – having interned there many moons ago, being offered a job in the digital marketing department was something of a dream come true for me. On my first day there I was discussing with a new colleague what our favourite books were; one of his was The God of Small Things. That it was on the BBC Big Read gave me further impetuous to read it, and so – after finishing The Hobbit – I began one of three copies I’ve accumulated over the years.

At number 85 in the BBC Top 100, The God of Small Things is one of the most recently written books on the list – completed in 1996, it won the Booker in 1997, just six years before the BBC conducted their poll to find the nation’s best loved book. Arundhati Roy’s debut – and so far only – novel, The God of Small Things is set against a background of political turbulence in Kerala – one of India’s most southern states – and follows the lives of boy and girl twins Rahel and Eshappe who live with their divorced mother Ammu and her extended family. The narrative shifts back and forth between their childhood and their lives as adults twenty-five years later via a series of flashback and memories. The prose is evocative and poetic and lends a sense of the exotic to an otherwise pensive plot.

Early on in the story we learn of a fateful event which is intrinsic to the plot, around the arrival of the twin’s cousin Sophie Mol.  Roy then goes on to weave together the events that led to the tragedy and the consequences that came thereafter.

With a lush and fragrant Indian backdrop, a colourful cast of characters – from the twin’s beloved Uncle Chacko to their Grand Aunt Baby Kochamma – and Roy’s rich and vivid prose, The God of Small Things is a haunting and atmospheric read. Full of melancholy and grief, yet beautifully written, it’s easy to see why The God of Small Things has been hailed as a modern masterpiece.

About The God of Small Things

“They all crossed into forbidden territory. They all tampered with the laws that lay down who should be loved and how. And how much.”

The year is 1969. In the state of Kerala, on the southernmost tip of India, fraternal twins Esthappen and Rahel fashion a childhood for themselves in the shade of the wreck that is their family. Their lonely, lovely mother, Ammu, (who loves by night the man her children love by day), fled an abusive marriage to live with their blind grandmother, Mammachi (who plays Handel on her violin), their beloved uncle Chacko (Rhodes scholar, pickle baron, radical Marxist, bottom-pincher), and their enemy, Baby Kochamma (ex-nun and incumbent grandaunt). When Chacko’s English ex-wife brings their daughter for a Christmas visit, the twins learn that things can change in a day, that lives can twist into new, ugly shapes, even cease forever, beside their river…

Arundhati Roy is an Indian writer who is also an activist who focuses on issues related to social justice and economic inequality. She won the Booker Prize in 1997 for her novel, The God of Small Things, and has also written two screenplays and several collections of essays.

For her work as an activist she received the Cultural Freedom Prize awarded by the Lannan Foundation in 2002.

3 comments on “Review: The God of Small Things – Arundhati Roy”