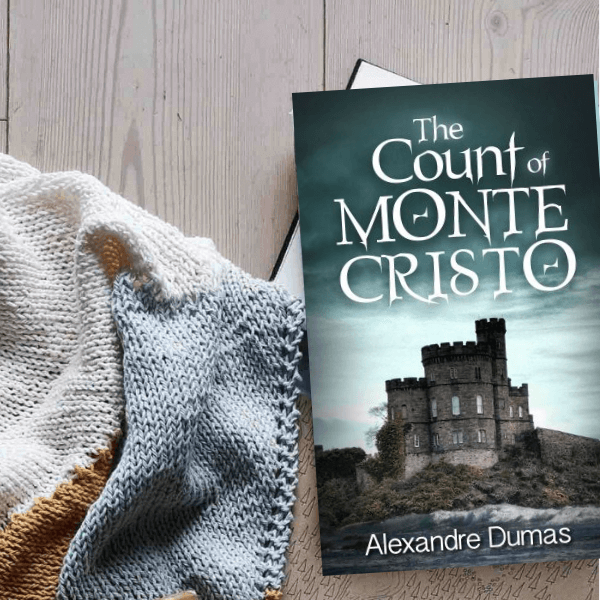 Almost every person I’ve encountered in the past three weeks is probably aware that I’ve been reading The Count of Monte Cristo. At number 44 on the BBC Big Reads, it’s one of the longest I’ve read to date – though having last night discovered that Dumas was paid by the word, one can certainly see why he’d pen such a lengthy novel – and on top of talking about it a lot, it’s had quite a big impact on my life. Not only have I been getting up before 6 most mornings to read; I’ve also been substituting trains for buses in order to make my commute to work longer so that I can increase my daily reading time.

Written in 1844 The Count is one of Dumas best loved novels and is a tale of adventure, revenge and deceit with a love story at its core. On the eve of his wedding to Mercedes, Edmond Dantes becomes the victim of a miscarriage of justice as he is arrested for being a Bonapartist traitor. Despite maintaining his innocence he is jailed where he spends six years plotting his revenge on those that have wronged him.

Having escaped from jail Dantes goes about exacting his revenge on a monumental scale; while also ensuring that he rewards those who were loyal to him, both prior and during his time in jail.

Set between 1815 and 1838 – a time when Napoleon was abdicated and exiled before ultimately returning to power – the backdrop is the basis for much of the political tension that lies within the novel. The tale is an epic one; populated with villains, aristocrats and innocents, the lives of the characters are in the hands of Dantes and as the plot unfolds so too do the fate of their fortunes.

For me, the final hundred pages – and indeed the climax of the tale – were the best, and I found myself racing through them despite not wanting the novel to end. A huge, beautiful, triumphant saga, The Count of Monte Cristo is the ultimate tale of revenge.

About The Count of Monte Cristo

In 1815 Edmond Dantès, a young and successful merchant sailor who has just recently been granted the succession of his erstwhile captain Leclère, returns to Marseille to marry his Catalan fiancée Mercédès. Thrown in prison for a crime he has not committed, Edmond Dantès is confined to the grim fortress of If. There he learns of a great hoard of treasure hidden on the Isle of Monte Cristo and he becomes determined not only to escape, but also to unearth the treasure and use it to plot the destruction of the three men responsible for his incarceration.

Alexandre Dumas was born on July 24, 1802, in Villers-Cotterêts, France. He adopted the last name “Dumas” from his grandmother, a former Haitian slave. Dumas established himself as one of the most popular and prolific authors in France, known for plays and historical adventure novels such as The Three Musketeers and The Count of Monte Cristo. He died on December 5, 1870, in Puys, France. His works have been translated into more than 100 languages and adapted for numerous films.