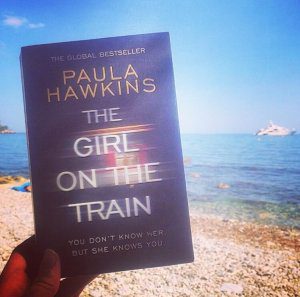 I’m probably one of the last people on earth to read Paula Hawkin’s The Girl on the Train. As often happens with new releases, I’m so nose-deep in my to-be-read pile that more recent reads are left by the wayside.

And so it was, that many months after its initial publication, and with just a matter of weeks until the film adaptation is released, that I finally got around to reading Hawkin’s debut; one which a legion of book aficionados have long since devoured. With high praise from my gorgeous friend Krish, alongside my current thirst for thrillers, I settled down to read it one dreary morning in Sydney, figuring it was better late than never.

An uneasy read from its very first line, The Girl on the Train tells the tale of Rachel, who takes the same commuter train every day, an opportunity which affords her a glimpse into the cozy suburban lives of a couple who she sees daily breakfasting in their garden. She calls them Jess and Jason, believing their relationship to be a perfect one, until one morning she sees something that will change her perception of them forever.

A police enquiry follows leaving Rachel entangled in a web of events and, as the tale unfolds, so too does its protagonist’s reliability.

Compelling from its very start, The Girl on the Train is the type of book that will entice its reader from the get-go, leaving a bitter after taste long after the final page is closed.