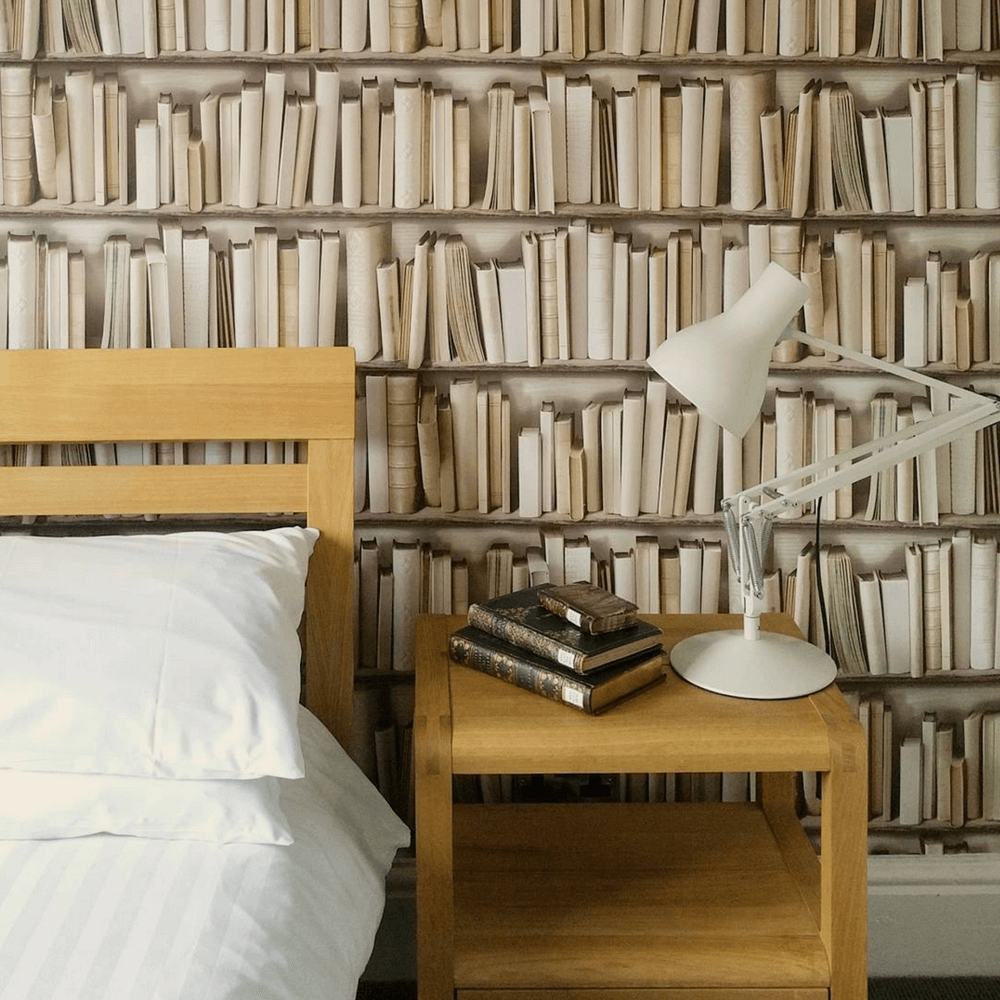 If roaring log fires, endless shelves of books and a Grade I-listed building in deepest, wildest North Wales sounds like your idea of literary heaven, add Gladstone’s Library to the top of your bookish bucket list. The world’s only purpose-built residential library,  Gladstone’s Library is so called due to its benefactor, William Gladstone, a former Prime Minister who was elected a record four terms and served between 1868 and 1894. A renowned book lover, Gladstone acquired more than 30,000 of them during his lifetime and soon after his death in 1898, Gladstone’s Library became the national memorial to both his life and work, as well as one of the few Grade I-listed buildings in North Wales.

I first came across Gladstone’s Library, and the aptly named idea of sleeping with books in a news article on The New Yorker, and so, as soon as I booked my flight back to London from LA for a two month stint in the UK, a visit to Gladstone’s Library was at the top of my to-do list. I invited my friend Laura, who I met four years ago on an Arvon writing retreat, and swiftly began planning a wintery weekend in Wales to dedicate some serious down time to two of my biggest pursuits and passions: reading and writing.

A scenic 30 minute bus ride from nearby Chester through the green Welsh countryside was enough to leave the gloom of grey London behind. We arrived as winter’s bitter chill was leaving autumn in its wake and the quaint village of Hawarden (pronounced: harden), in which the library lives, was lined with damp golden leaves and barren branched trees. We passed a candle lit pub and a cosy looking coffee shop, before veering off the main road to a lane sandwiched between the library, the local church and a graveyard cast with shadows. The understated entrance leads to the library’s pious, Victorian Gothic exterior that looks somewhat dramatic, particularly in the late afternoon winter sunshine, and wouldn’t be out of place in any number of literature’s most evocative houses: part Hogwarts, part Narnia, featuring lead lined windows and a red brick facade. Inside: a temple of tomes: well trodden wooden floors, battered leather armchairs; books lining the walls of almost every room.

The upstairs corridors wind round the building’s expanse and feature deep, plush carpets and unrivalled views of the grounds. There are 26 bedrooms available to book; cosy and quaint; with retro radios set to classical music, angle poise lamps, writing desks and views of the Welsh countryside; all of which provide the perfect backdrop for a weekend spent nestled down with your nose in a book.

The walls of the residential library are steeped in literature and home to more than 250,000 books, of which more than 32,000 constitute the private collection of the former Prime Minister, mostly under the themes of theology, literary culture, history and politics, many still annotated with his original notes (including the damning verdict “idiot” in a book about John Wesley, written by T W Christe). Over 590 books having been written or researched within the walls of Gladstone’s Library since 2000, and with several nooks and crannies in which to read, and an impressive selection of lamp lit desks enclosed by books, it’s the perfect place for any aspiring authors or would-be writers to hunker down for an weekend of unadulterated bookish bliss. 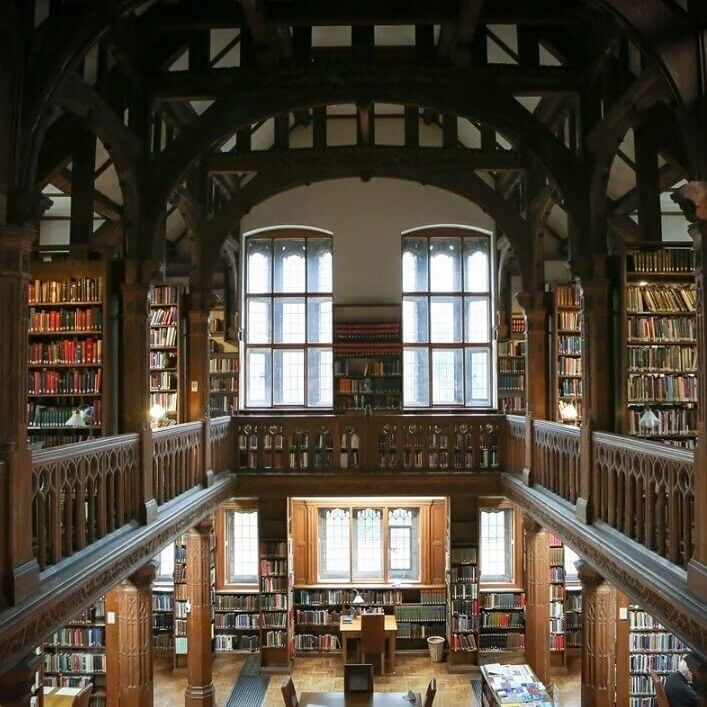 While the library has a mezzanine filled with reading nooks, the cosiest room for curling up with a book is the Gladstone Room, filled with big comfy sofas, Persian rugs, lamps, a chess set, puzzles, newspapers, an honesty bar with everything from soft drinks to spirits, a roaring open fire – fed throughout the night – and shelves of contemporary fiction featuring the likes of Lionel Shriver, Graham Swift, Muriel Sparks and more. The borrowing system is the same throughout the house, and books must be replaced with a card stating who took it and when.

Photos and retold accounts can barely prepare you for the magic of the place, something that was made all the more atmospheric by the howling gales and tumultuous weather that stayed for most of our visit. For the bookish among us; for those enchanted by the romance of reading by the fire, or writing in a library, or country houses or bad weather, you will find all of this and more besides within the walls of Gladstone’s Library. Writing at night by the light of a lamp in the library; rain clattering against the windows, looming clouds, sheets of mist sweeping across the lawn in the dawn of an early morning, winding corridors, creaking staircases. Legions of books: well thumbed tomes, tales unread, stories untold, boundless books; seas of shelves. 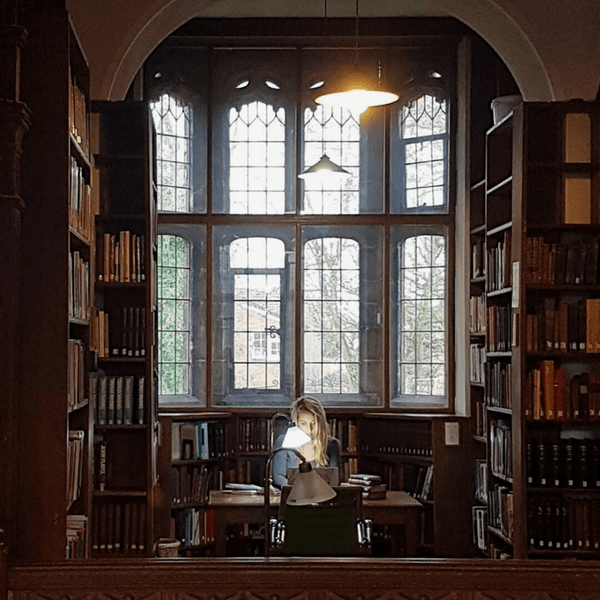 The food is served in the appropriately named Food for Thought room and is hearty and wholesome and best eaten with an empty stomach. For breakfast: croissants and english muffins, and fried tomatoes; omelettes and cereals and toast; piping hot pots of tea and bitter smelling coffee. Leisurely lunches with crisp jacket potatoes, quiches and Sunday roasts and suppers made of  creamy butternut squash and goats cheese lasagne, basa fillet and bacon chops.

On our second and final morning at Gladstone’s Library, I was woken by the sound of the wind skittering around the library’s grounds. I did what I often do when I know there’s little chance of returning to sleep: boiled a kettle and made myself a strong cup of tea, before curling back beneath the warm Welsh blankets. I opened the blind; the windows were misted over and the sky outside was dark and I thought of the people and the books and the stories that had passed through the walls and the shelves and corridors before me.

The highlights were many  and endless: the fireside readings, the creamy hot chocolates in dusk’s swift approach, late nights in the library; the tapping of keys loud against the looming silence, shadows cast across the shelves. The friends we met; Norwegians, Canadians, a Brit and an American; the reading recommendations we swapped; the stories told of who was here for what reason and why. Our stay was short, but it’s a place to which I know I’ll return.

If you fancy sleeping with books, you can find out more about Gladstone’s Library here.

Getting here
If you are coming from London then the best thing to do is book a train ticket from London to Chester. When you arrive at Chester, you can take bus 4 or X4 right to Gladstone’s Library and you’ll be there in around half an hour.

Price
Room prices start from £66 but there are discounts available for students and clergymen.

9 comments on “Sleeping with books: a storied stay at Gladstone’s Library”