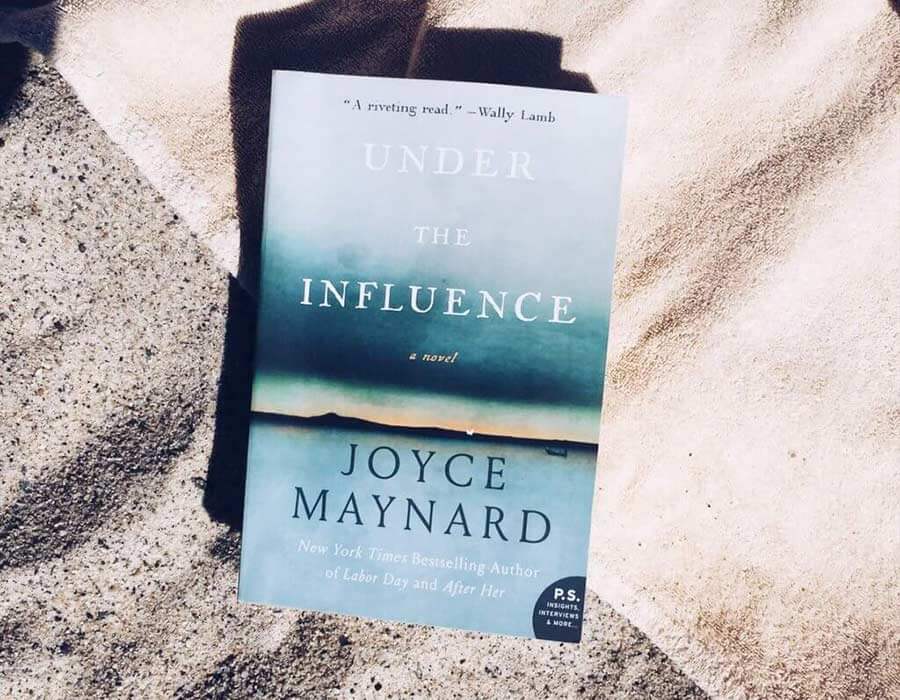 As a seasoned bookworm that loves nothing more than devouring books in their droves; few things are better than finding an author I adore and then making it my mission to read their entire back catalogue. While I came across Joyce Maynard a couple of years ago when I read Labour Day – a subtle yet brilliant tale that was made into a film with Kate Winslet – it wasn’t until I read her latest book; a memoir called The Best of Us about her late husband Jim’s battle with pancreatic cancer, that I realised just how much I loved her writing. Both her prose and sense of place really swept me away, and so when I visited Venice Beach over the weekend and my boyfriend said he’d buy me a new book from the lovely beach front bookstore, I knew exactly what I was looking for.

After reviewing The Best of Us a week or so ago, many other readers came forward to say that they were fans of Maynard’s work, and a number of people recommend I read Under the Influence. And so despite having already packed two books for my trip down the Californian coast, the one I started with was Maynard’s.

The tale of a friendship gone sour – something that certainly resonated with me – Under the Influence is a story about Helen, who, after a DUI conviction loses custody of her seven year-old son, Ollie. While once an aspiring art photographer, faced with mountains of legal debt Helen now makes ends meet taking portraits of school children and working for a caterer, while her evenings are spent alone, perusing online dating sites.

Soon after losing custody of Ollie, Helen meets glamorous couple Ava and Swift Havilland, who take her under their wing and open the doors to their fabulous, fun-filled home. Vulnerable and lonely, Helen is captivated by the couple who are wealthy and generous and have the kind of loving relationship Helen never had and wishes for herself.

RELATED:  I Feel Bad About My Neck Book Review

Without giving too much of the plot away, however, things are not on they seem as the surface, and the more intertwined their lives become, the further Helen has to fall.

Compelling and captivating with rich character development throughout, Under the Influence weaves themes of friendship, control, intimacy, family, and parenthood and builds to a climatic ending that makes the reader ponder the difference between fleeting friendships and true blue friends.

About Under the Influence

Drinking cost Helen her marriage and custody of her seven-year-old son, Ollie. Once an aspiring art photographer, she now makes ends meet taking portraits of school children and working for a caterer. Recovering from her addiction, she spends lonely evenings checking out profiles on an online dating site. Weekend visits with her son are awkward. He’s drifting away from her, fast.

When she meets Ava and Swift Havilland, the vulnerable Helen is instantly enchanted. Wealthy, connected philanthropists, they have their own charity devoted to rescuing dogs. Their home is filled with fabulous friends, edgy art, and dazzling parties.

Then Helen meets Elliott, a kind, quiet accountant who offers loyalty and love with none of her newfound friends’ fireworks. To Swift and Ava, he’s boring. But even worse than that, he’s unimpressed by them.

As Helen increasingly falls under the Havillands’ influence—running errands, doing random chores, questioning her relationship with Elliott—Ava and Swift hold out the most seductive gift: their influence and help to regain custody of her son. But the debt Helen owes them is about to come due.

Ollie witnesses an accident involving Swift, his grown son, and the daughter of the Havillands’ housekeeper. With her young son’s future in the balance, Helen must choose between the truth and the friends who have given her everything.

Joyce Maynard first came to national attention with the publication of her New York Times cover story “An Eighteen-Year-Old Looks Back on Life” in 1973, when she was a freshman at Yale. Since then, she has been a reporter and columnist for The New York Times, a syndicated newspaper columnist whose “Domestic Affairs” column appeared in more than fifty papers nationwide, a regular contributor to NPR. Her writing has also been published in national magazines, including O, The Oprah Magazine; Newsweek; The New York Times Magazine; Forbes; Salon; San Francisco Magazine, USA Weekly; and many more. She has appeared on Good Morning America, The Today Show, CNN, Hardball with Chris Matthews, Charlie Rose, and on Fresh Air. Essays of hers appear in numerous collections. She has been a fellow at Yaddo, UCross, and The MacDowell Colony, where she wrote her most recently published novel, Labor Day.

The author of many books of fiction and nonfiction, including the novel To Die For (in which she also plays the role of Nicole Kidman’s attorney) and the bestselling memoir, At Home in the World, Maynard makes her home in Mill Valley, California. Her novel, The Usual Rules—a story about surviving loss—has been a favorite of book club audiences of all ages, and was chosen by the American Library Association as one of the ten best books for young readers for 2003.