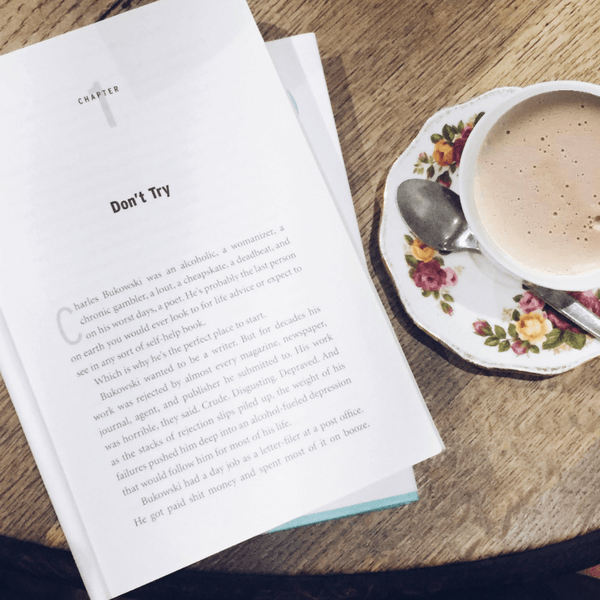 I’m not entirely sure when The Subtle Art of Not Giving a F*ck was published, but suffice it to say it’s become something of a cult read of late. It seems that every where I look; on the train, on the beach, in my local bookstore-come-cafe, people are reading it, and more than that; they’re recommending it too.

A friend of mine lent me The Subtle Art of Not Giving a F*ck, and while I was already half way through André Aciman’s Call Me By Your Name, I found myself locked out of my apartment as dusk fell on Sunday evening, and so I made my way to my favourite bookstore-come-cafe in Bondi, and settled down for two hours of reading with a chai tea and the background buzz of chatter for company.

Using case studies and his own life experience, Manson’s philosophy that we hone in on what’s really important in life, and stop giving  air time to what isn’t, is a clear reminder to not sweat the small stuff. He talks about how comparison truly is a thief of joy, and how while we all continue to strive for success,  ironically, this fixation on the positive—on what’s better, what’s superior—only serves to remind us over and over again of what we are not, of what we lack, of what we should have been but failed to be.

The chapter on blame versus responsibility was one that really resonated with me, and how my life has played out since quitting my job fourteen months ago and the highs and lows that have since ensued. I suppose blame and responsibility are two things that we often see as going hand in hand – if we’re to blame for something we’re therefore responsible for it and vice versa, yet Manson states an argument for why this isn’t necessarily the case. There are many things in life that happen to us that we’re not to blame for – a turbulent childhood, an abusive relationship, a toxic boss – but while it may not be our fault that such things have happened, it is in fact our responsibility to rectify said situation and come out the other end smiling.

RELATED:  Five of my favourite books about books

I think as humans we have a tendency to blame others for our misfortunes – the bosses who made our life hell, the so-called friends who took advantage of our good nature – and it’s always easier to attribute our downfalls to those on the outside, rather than taking ownership for when things don’t go according to plan. Manson’s simple, but effective theory on taking responsibility for something, even when you’re not to blame for it, is one that not only makes sense, but also encourages a more fulfilled way of living; if, after all, we can hold ourselves accountable for our failures, we too can take power over our successes.

An easy an inspiring read to live a better life – one in which we place more prominence on what’s important and less on what’s not, The Subtle Art of Not Giving a F*ck is a book that will give you clarity on why things might have gone wrong in the past, and how to best rectify them for the future.

Mark Manson is a blogger, author and entrepreneur. He specializes in writing personal development advice that doesn’t suck. His website MarkManson.net is read by over 2 million people each month. He lives in New York City.

About The Subtle Art of Not Giving a F*ck

In this generation-defining self-help guide, a superstar blogger cuts through the crap to show us how to stop trying to be “positive” all the time so that we can truly become better, happier people.

For decades, we’ve been told that positive thinking is the key to a happy, rich life. “F**k positivity,” Mark Manson says. “Let’s be honest, shit is f**ked and we have to live with it.” In his wildly popular Internet blog, Mason doesn’t sugarcoat or equivocate. He tells it like it is—a dose of raw, refreshing, honest truth that is sorely lacking today. The Subtle Art of Not Giving a F**k is his antidote to the coddling, let’s-all-feel-good mindset that has infected American society and spoiled a generation, rewarding them with gold medals just for showing up.

Manson makes the argument, backed both by academic research and well-timed poop jokes, that improving our lives hinges not on our ability to turn lemons into lemonade, but on learning to stomach lemons better. Human beings are flawed and limited—”not everybody can be extraordinary, there are winners and losers in society, and some of it is not fair or your fault.” Manson advises us to get to know our limitations and accept them. Once we embrace our fears, faults, and uncertainties, once we stop running and avoiding and start confronting painful truths, we can begin to find the courage, perseverance, honesty, responsibility, curiosity, and forgiveness we seek.