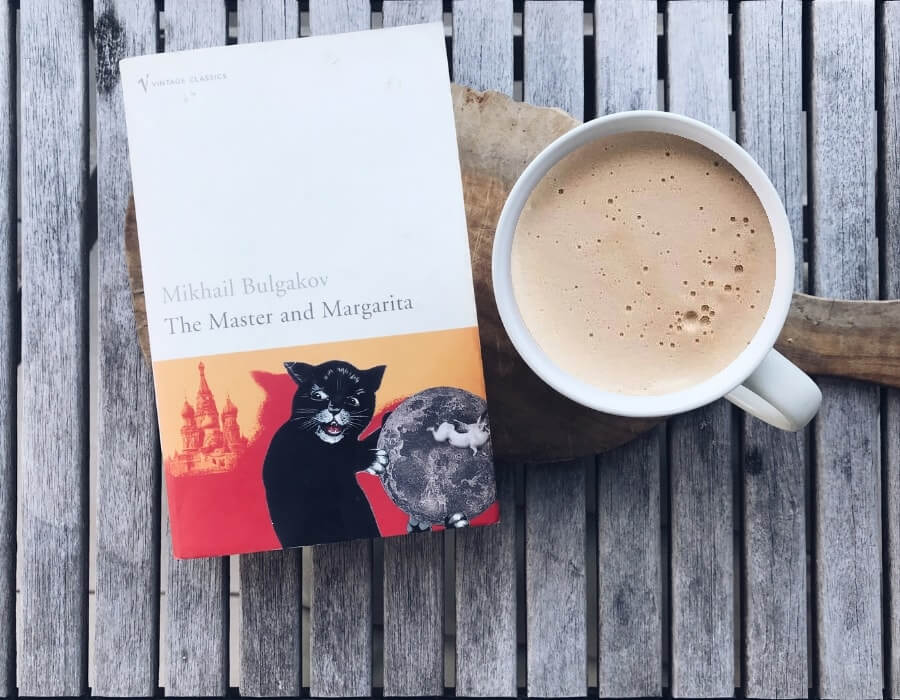 When I decided to read the BBC’s Top 100 Books, my main reason for doing so was to expand my reading repertoire. And while it was something of a relief when I finished the hundredth book just a matter of minutes before I turned thirty, in the months that have since passed I’ve missed having a list to choose from. and often considered working my way through the additional hundred books that made the BBC’s Top 200 Books, particularly after finishing one of my most recent reads, The Mater and Margarita by Mikhail Bulgakov.

It’s not a book I had heard of until I launched my Desert Island Books series, but after editor Sam Baker and Bookstagrammer Bookish Bronte both chose it as one of their desert island reads it was firmly on my radar. I was then recently recommended it by someone I met at a party, and so I swiftly bought a copy from Gertrude and Alice, before settling in for a night of reading.

Like many people, I’m often wary of my literary abilities before beginning a Russian classic, but much like Dostoyevsky’s Crime and Punishment – which I raced through – I was hooked from the get go with The Master and Margarita.

A unique tale unlike anything I’ve read before, Mikhail Bulgakov’s much-loved book is considered by many critics as one of the best novels of the twentieth century, as well as the foremost of Soviet satires. Fusing fantasy with magical surrealism and political satire, The Master and the Margarita is a pacy read set in 1930s Moscow. It tells the story of the devil and his cronies who descend on the Russian capital, putting the entire city on edge with their diabolical humour and magic tricks, while the authorities look on, entirely powerless. Before the arrival of the devil, a “Master” wrote a novel about Pontius Pilate (this serene novel within the novel is entirely integrated in the story), which was dismissed by the regime, therefore sending the Master into a mental asylum. Meanwhile, Margarita, the Master’s clandestine lover, makes a pact with the devil to save her companion writer.

A perfect example of the Russian tradition of wit, imagination and satire that features a wonderful cast of characters – including a talking black cat with a penchant for chess and vodka – Bulgakov effortlessly combines the historical, the biblical and the magical to deliver one of literature’s most accomplished and creative books.

About The Master and Margarita

Nothing in the whole of literature compares with The Master and Margarita. One spring afternoon, the Devil, trailing fire and chaos in his wake, weaves himself out of the shadows and into Moscow. Mikhail Bulgakov’s fantastical, funny, and devastating satire of Soviet life combines two distinct yet interwoven parts, one set in contemporary Moscow, the other in ancient Jerusalem, each brimming with historical, imaginary, frightful, and wonderful characters. Written during the darkest days of Stalin’s reign, and finally published in 1966 and 1967, The Master and Margarita became a literary phenomenon, signaling artistic and spiritual freedom for Russians everywhere.

Born in 1891 in Kiev, now the capital of Ukraine, Mikhail Bulgakov studied medicine at Kiev University, practicing briefly before being drafted by the Whites (anti-Bolsheviks) in 1918 as a field doctor. He was sent to the Caucasus, where, after leaving the military, he began working as a journalist. Along with humorous sketches, Bulgakov wrote White Guard (1924), an autobiographical novel about his experience in the civil war and one of the first serious works of literature on the subject. The Days of the Turbins (1926), a play based on White Guard, was supposedly one of Joseph Stalin’s favorites and helped establish Bulgakov as one of Russia’s preeminent playwrights. He died impoverished and blind in 1940 shortly after completing his masterpiece, The Master and Margarita.