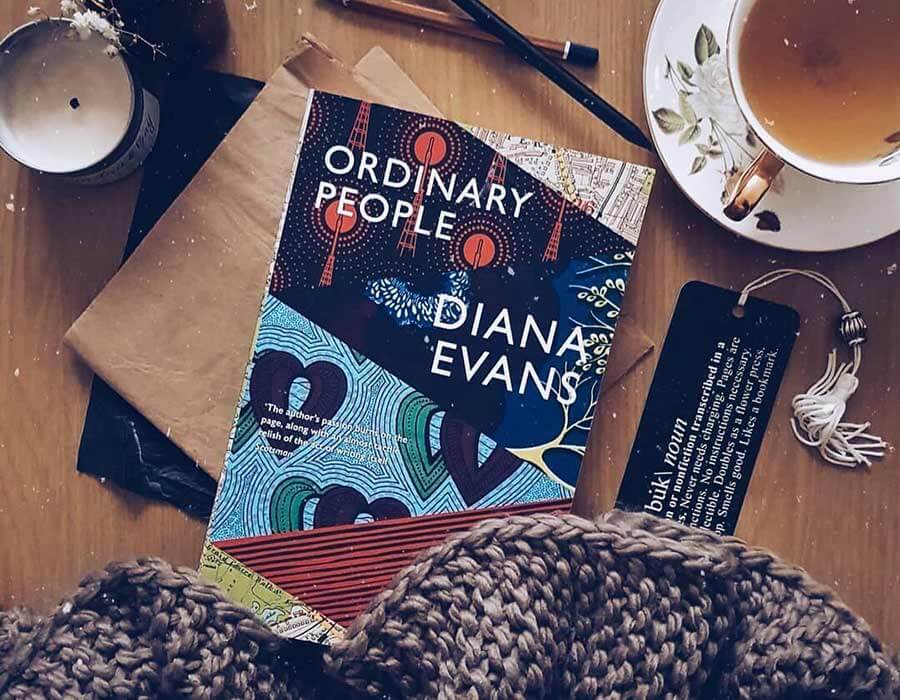 I first met Diana Evans many moons ago on a residential writing retreat in Shropshire, run by the Arvon Foundation. It was a bleak and blustery week filled with writing workshops, wine and woodland walks and the first time I had spent any length of time with published authors. I went on to read Diana’s book, 26a, in the weeks that followed the writing retreat, and while my memory of it is somewhat hazy, I remember enjoying the haunting tale of twinhood.

It being many years since I last read anything by Diana, it was with great delight that I saw her latest book, Ordinary People, on the 2019 Women’s Prize for Fiction long-list, and after bringing her book back to Sydney with me, I quickly got stuck in.

An unassuming, simmering and slow-paced book that starts on New Year’s Eve in South London, in 2008, Ordinary People follow two couples: Melissa and Michael, and Damian and Stephanie: all of whom are navigating increasingly loveless relationships that have been largely affected by the arrival of their children and the domesticities and mundanities of every day life. The political backdrop of Barack Obama’s recent inauguration adds a deeper context to the characters’ struggles as we witness them grapple with life in suburbia, race and identity as their romantic relations continue to disintegrate.

Melissa and Michael live on the borders of Crystal Palace, are not yet married, and while on the surface they seem like the perfect couple, the reality is far from rosy. Parents to daughter Ria and new baby-son Blake, both characters long for the passion their relationship once held, and while Melissa yearns for her once high-flying career, Michael laments the dormant and dead territory on which their relationship now teeters.

Meanwhile, Stephanie and Damian have left the bright lights of London for suburban Surrey with their three children, Jerry, Avril and Summer – a move that has caused great conflict and contention for Damian who doesn’t feel his blackness sits well outside of the capital. They too are facing obstacles in their relationship; caused in part by the recent death of Damian’s dad and further magnified by the isolation he feels living in Dorking.

An element of the supernatural underpins much of the novel, as Melissa believes that the house she and Michael have bought is haunted, and that a presence is slowly destroying their daughter.

Taught with tension, raw and real, Ordinary People is an exploration of the conflict between big dreams and real lives. Set against a backdrop rich in popular culture, it’s an unputdownable read and a painstaking and melancholy depiction of the nuances of four very ordinary people and their equally ordinary lives.

South London, 2008. Two couples find themselves at a moment of reckoning, on the brink of acceptance or revolution. Melissa has a new baby and doesn’t want to let it change her but, in the crooked walls of a narrow Victorian terrace, she begins to disappear. Michael, growing daily more accustomed to his commute, still loves Melissa but can’t quite get close enough to her to stay faithful. Meanwhile out in the suburbs, Stephanie is happy with Damian and their three children, but the death of Damian’s father has thrown him into crisis – or is it something, or someone, else? Are they all just in the wrong place? Are any of them prepared to take the leap?

Set against the backdrop of Barack Obama’s historic election victory, Ordinary People is an intimate, immersive study of identity and parenthood, sex and grief, friendship and aging, and the fragile architecture of love. With its distinctive prose and irresistible soundtrack, it is the story of our lives, and those moments that threaten to unravel us.

Diana Evans is a British author of Nigerian and English descent. Her bestselling novel, 26a, won the inaugural Orange Award for New Writers and the British Book Awards deciBel Writer of the Year prize. It was also shortlisted for the Whitbread First Novel, the Guardian First Book, the Commonwealth Best First Book and the Times/Southbank Show Breakthrough awards, and longlisted for the International IMPAC Dublin Literary Award. Her second novel, The Wonder, is currently under option for TV dramatisation. She is a former dancer, and as a journalist and critic has contributed to among others Marie Claire, the Independent, the Guardian, the Observer, the Times, Financial Times and Harper’s Bazaar. She holds an MA in Creative Writing from the University of East Anglia and was a Royal Literary Fellow at the London College of Fashion and the University of Kent. Ordinary People is her third novel, and received an Arts Council England Grants for the Arts Award. She lives in London.