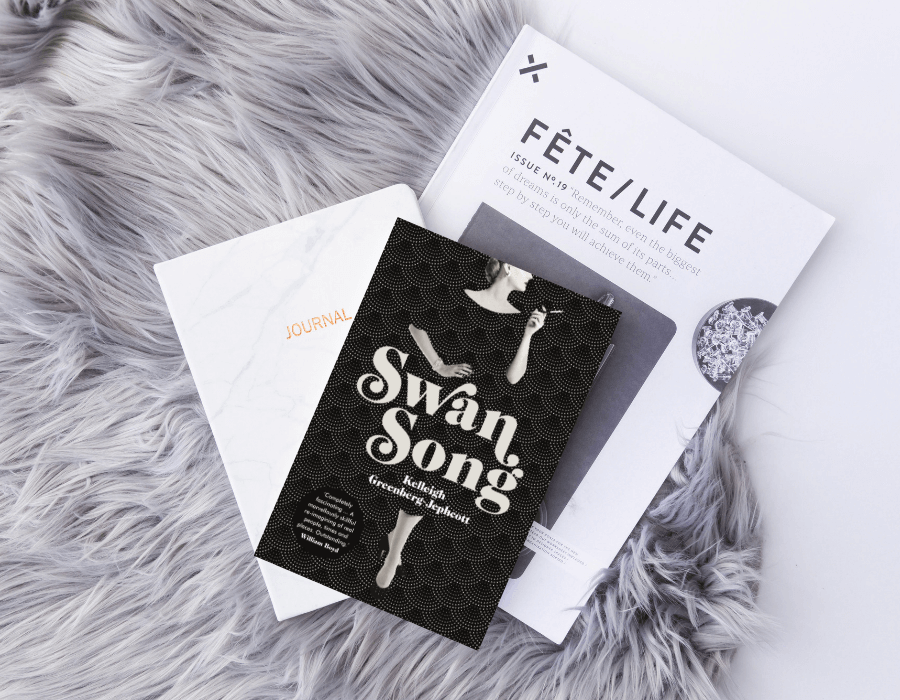 As a book blogger, I get countless requests each week to review books; but the one I received from Kelleigh Greenberg Jephcott towards the end of last year, asking if I might like to review her debut novel Swan Song, was by far one of the nicest emails I’ve ever received. Passionate, warm and friendly in her email, I didn’t have to think twice about reading her book. Kelleigh was kind enough to send a signed copy to my house in Sydney, and I was lucky enough to meet her for a few festive tipples on Quo Vadis when I was back in the UK for Christmas. And while it took me a couple of months to get around to reading Swan Song, it was well worth the wait – not only because the book itself is a brilliant one, but also because Kelleigh’s bubbly personality shone through every page of her debut.

I have to admit that prior to reading Swan Song, I knew almost nothing about Truman Capote; I had, of course, heard of his two most famous books, his much-loved novella Breakfast at Tiffany’s and his non-fiction novel, In Cold Blood, but that was about the extent of my knowledge. And thus it was that for me, Swan Song was not only a riveting read, but it too was an informative insight into one of the twentieth century’s most renowned literary darlings.

A gripping, often hilarious and wonderfully imagined story of the famous author and his ‘Swans’ – a term Truman Capote first coined to describe his beautiful, stylish, and wealthy coterie of female friends – Swan Song is the best sort of historical novel. A brilliant blend of fact and fiction, at the heart of Swan Song is the tale of Truman Capote and the flock of women who confided in him, only to have their trust broken and their secrets betrayed. The pages are filled with iconic names: Jackie Kennedy, Gore Vidal, Mick Jagger, Cecil Beaton and Capote’s childhood best friend Harper Lee and, they too are rich with the lives of the Swans – Babe Paley, Slim Keith, Lee Radziwill, C. Z. Guest, Gloria Guinness, Marella Agnelli. An indulged and indulgent group of socialites, society hostesses, tycoon’s wives and other wealthy women, when he went on to publish just a fraction of what he had learned in their company in “La Côte Basque, 1965,” he created a new art form: social suicide and from then on his gradual decline began.

A compelling, engrossing and evocative read, it is testament to Kelleigh’s talent as a storyteller, that in the hours that have passed since I finished Swan Song, I have been trawling the internet to find out more about this one-time literary great. A pacy read about celebrity and fame, secrets and betrayal, I defy anyone to read Swan Song without immediately wanted to delve deeper into the life of Truman Capote.

Over countless martini-soaked Manhattan lunches, they shared their deepest secrets and greatest fears. On exclusive yachts sailing the Mediterranean, on private jets streaming towards Jamaica, on Yucatán beaches in secluded bays, they gossiped about sex, power, money, love and fame. They never imagined he would betray them so absolutely.

In the autumn of 1975, after two decades of intimate friendships, Truman Capote detonated a literary grenade, forever rupturing the elite circle he’d worked so hard to infiltrate. Why did he do it, knowing what he stood to lose? Was it to punish them? To make them pay for their manners, money and celebrated names? Or did he simply refuse to believe that they could ever stop loving him? Whatever the motive, one thing remains indisputable: nine years after achieving wild success with In Cold Blood, Capote committed an act of professional and social suicide with his most lethal of weapons . . . Words.

A dazzling debut about the line between gossip and slander, self-creation and self-preservation, SWAN SONG is the tragic story of the literary icon of his age and the beautiful, wealthy, vulnerable women he called his Swans.

‘Writers write. And one can’t be surprised if they write what they know.’

Kelleigh Greenberg-Jephcott was born and raised in Houston, Texas, before coming to call Los Angeles and London her adopted homes. She is a graduate of UEA’s Creative Writing MA course and was the winner of the Bridport Prize Peggy Chapman-Andrews Award. Swan Song is her first novel.