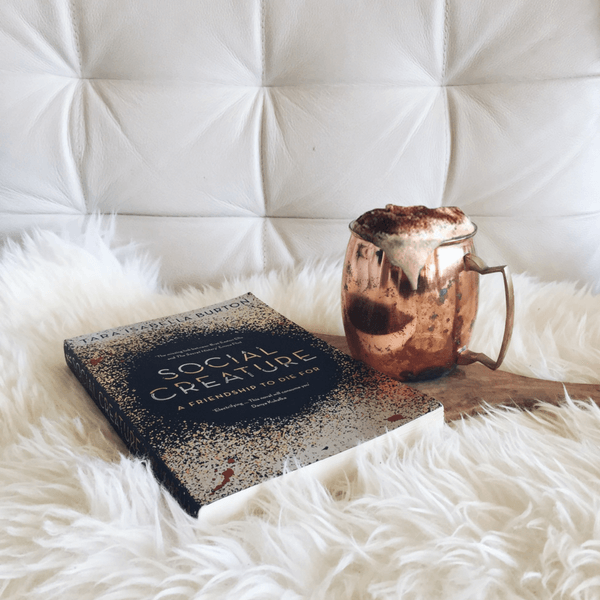 While I’m yet to read The Talented Mr Ripley, it’s been on my shelves ever since the lovely Margot from brilliant book blog Project Lectito recommended it to me, and as a big fan of Donna Tartt, when I read a review of debut novel Social Creature, in which it was described as a cross between The Secret History and Patricia Highsmith’s much loved novel, I added it to my mental TBR pile. And so when, a few days letter, a copy arrived in the post, I saw it as a serendipitous sign and so settled in for an afternoon of reading; barely moving until the book was finished.

An addictive read from the very first page, we meet rich New York socialite Lavinia, and aspiring – but broke –  writer Louise, who form a firm and fast friendship after meeting at a party. As their relationship intensifies, so too does its toxicity and it soon borders on an obsession for them both as their co-dependency grows.

As they travel from one decadent, outrageous, and extravagant party to the next, Louise becomes infatuated with Lavinia and her lifestyle, while Lavinia is dependent and driven by how exotic, exciting, and enviable her online persona is. As the tale progresses, Social Creature offers an intimate observation of the relationship between sophisticated Lavinia and insecure Louise, the fraying of their friendship, and the lengths Louise will go to in order to preserve it. Full of hedonistic and the sort of self-obsessed and self-gratifying behaviour that will leave a sour taste in its readers mouth, the tale manages to retain a frenetic energy throughout, with disaster awaiting at the book’s climatic ending.

Rich with deeply unlikeable characters and ripe with unpredictable twists and turns that will keep its reader wanting more; Burton has achieved something of a rare feat with this thrilling debut. A smart, fast paced and intelligent read that explores society’s reliance on social media, Social Creature is a captivating, absorbing and dark tale that explores the dangers of living our lives so completely online.

Buy Social Creature by Tara Isabella Burton on Amazon or from Waterstones.

Louise is struggling to survive in New York; juggling a series of poorly paid jobs, renting a shabby flat, being cat-called by her creepy neighbour, she dreams of being a writer. And then one day she meets Lavinia. Lavinia who has everything – looks, money, clothes, friends, an amazing apartment.

Lavinia invites Louise into her charmed circle, takes her to underground speakeasies, the opera, shares her clothes, her drugs, her Uber account. Louise knows that this can’t last for ever, but just how far is she prepared to go to have this life? Or rather, to have Lavinia’s life?

Tara Isabella Burton has followed a female hermit into the remote Caucasus, gotten love amulets from Turkish Islamic shamans, and held signs with the street preachers of Las Vegas.

Her work on religion, culture, and place can be found at National Geographic, The Wall Street Journal, Al Jazeera, The Economist’s 1843, Aeon, The BBC, The Atlantic, The American Interest, Salon, The New Statesman, The Telegraph, and more. Her fiction has appeared at The New Yorker’s Daily Shouts, Great Jones Street, Tor.com, PANK, Shimmer, and other places. She has received The Spectator’s 2012 Shiva Naipaul Memorial Prize and a 2016 Lowell Thomas Award.

RELATED:  Beautiful World, Where Are You Book Review