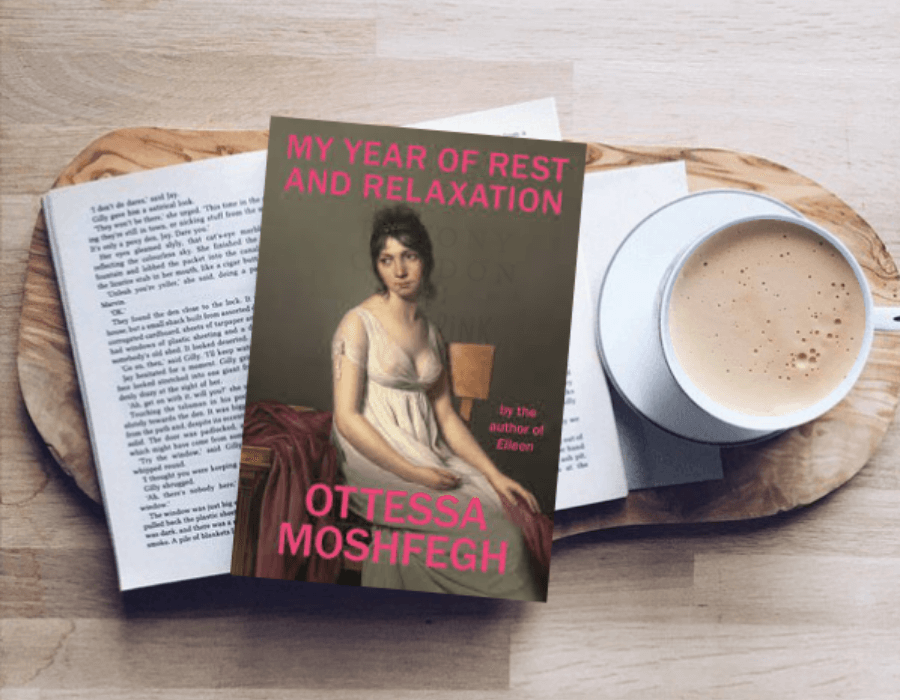 I picked up My Year of Rest and Relaxation on something of a whim. I had given up on trying to self-impose a book buying ban, but with an ever growing pile of books on my bedside table, I had made a loose promise to work my way through them prior to adding further to said pile. Alas, the combination of the slightly old fashioned cover along with the title of the book had piqued my interest a number of times while eyeing the shelves of my local bookshop, and so, one rare sunny Saturday of late, I bought My Year of Rest and Relaxation before heading home to spend the night ahead reading.

A dry and compelling tale, My Year of Rest and Relaxation is unlike anything I’ve ever read before and offers readers a unique and contemporary take on the well-known metamorphosis tale. Set at the beginning of the twenty-first century, the tale is narrated by a nameless, lifeless, thin, beautiful, rich, and hugely unlikeable character, obsessed with Whoopi Goldberg and Harrison Ford, and through whom the author injects absurdly wry observations on both the glitter and the grime of New York City. We learn that the narrator plans on spending a year in hibernation to sleep away her emotions, wrapped up in a cocoon of colorful pharmaceutical helpers. She secures the worst shrink in literary history, who gladly prescribes her every possible sleep aid on the market and the narrator is consequently given pharmaceuticals by the handful. Disinterested with both herself and those around her, she endures endless nightmares and blackouts brought on by her meds, as the preferred alternative to her awakened existence, and lives in a dreamlike and drug-induced coma for a year. On the rare occasions she comes up for air, she visits her local bodega to stock up on stale coffee, and sometimes comes around to discover she’s spent an unknown amount of time indulging in either online shopping or reckless partying.

In stark contrast to the narrator, Moshfegh offers readers her sweet best friend from college, the try-hard and eager to please Reva. Desperate to fit in, bulimic and susceptible to illicit affairs with bosses, Reva is the stereotypical antithesis to our apathetic heroine. She issues Oprah-book-club axioms and sophomoric attempts at psychoanalysis, trying to establish a connection with our narrator, alas to no avail. In the end, her frantic running around attempting to change herself is just as ineffectual as the narrator’s standing still.

Wry, witty, and unexpectedly tender, My Year of Rest and Relaxation is an absorbing and enthralling book that leaves readers feeling anything but restful and relaxed. Rich with brilliant writing and story-telling, ripe with satire and self-care, while an almost plotless book, what it lacks in action, it makes up for on every other level. A smart, pacy and engrossing book, I couldn’t recommend it any higher than I do.

About My Year of Rest and Relaxation

A shocking, hilarious and strangely tender novel about a young woman’s experiment in narcotic hibernation, aided and abetted by one of the worst psychiatrists in the annals of literature. Our narrator has many of the advantages of life, on the surface. Young, thin, pretty, a recent Columbia graduate, she lives in an apartment on the Upper East Side of Manhattan paid for, like everything else, by her inheritance. But there is a vacuum at the heart of things, and it isn’t just the loss of her parents in college, or the way her Wall Street boyfriend treats her, or her sadomasochistic relationship with her alleged best friend. It’s the year 2000 in a city aglitter with wealth and possibility; what could be so terribly wrong?

This story of a year spent under the influence of a truly mad combination of drugs, designed to heal us from our alienation from this world, shows us how reasonable, even necessary, that alienation sometimes is. Blackly funny, both merciless and compassionate – dangling its legs over the ledge of 9/11 – this novel is a showcase for the gifts of one of America’s major young writers working at the height of her powers.

Ottessa Moshfegh is a fiction writer from Boston. She was awarded the Plimpton Prize for her stories in The Paris Review and granted a creative writing fellowship from the National Endowment for the Arts. She is currently a Wallace Stegner fellow at Stanford.

1 comment on “Review: My Year of Rest and Relaxation – Ottessa Moshfegh”