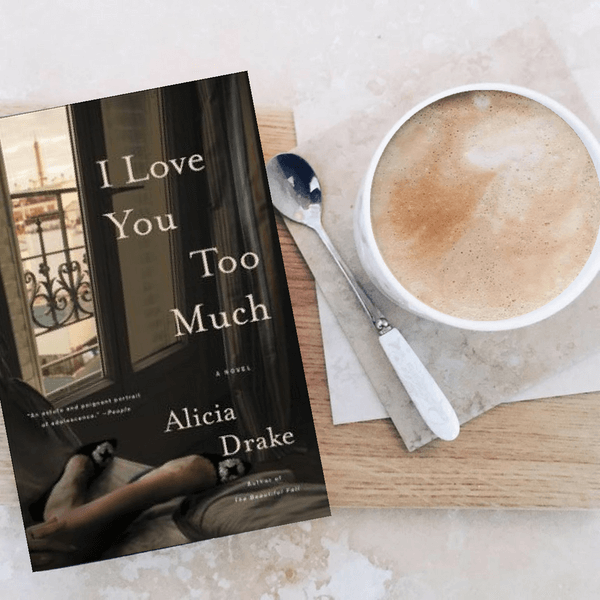 As soon as I heard author Alicia Drake read the opening page from her debut novel, I Love You Too Much, on one of my favourite bookish podcasts, Tea and Tattle, I knew I was going to love it. It’s the sort of opening, much like that of one of my very favourite books, Rebecca, that immediately draws its reader in and leaves them wanting more. And so, despite already being 200 pages into a different book, as soon as I Love You Too Much arrived on my doorstep, I cancelled all plans and read the book in its entirety in a single sitting; something of a feat for someone who is easily distracted by the lures of social media.

Like many people do with many cities, I’ve always had a very romanticised view of Paris; imagining it to be a city steeped in magic, where its inhabitants wear Brenton t-shirts and carry French baguettes, and days are spent sipping piping hot chocolat chauds, or vats of red wine of an evening. I’ve always believed, that were I to ever live there, it would be in a loft apartment, with billowy white curtains and wooden floors and a balcony with views of the Eiffel Tower and a writing desk stained with coffee and ink, piled high with papers of an unread manuscript.

Not dissimilar to my discovering on moving to LA that the reality was in fact quite the opposite to the fantasy we’re fed via the big screen, it was refreshing to read Drake’s portrayal of Paris in I Love You Too Much, given that it’s certainly not the sort we’re used to. Instead of cobbled streets and romantic walks along the Seine, Drake introduces us to a Paris that is wrought with snobbery, and where there are systems and structures in place that keep classes apart and stop the lesser mortals from ever infiltrating the upper echelons of society.

Told through the eyes of thirteen-year-old Paul, the son of elegant Séverine and her fitness obsessed ex-husband Phillipe, we learn of his boundless love for food – the sticky, the sweet, and the savoury – a dependency which infuriates both parents; and his unlikely friendship with schoolmate Scarlett, who he bonds with while at a spa weekend with his mother.

On the vulnerable cusp of adolescence, Paul is a sad and somewhat lonesome character; the product of a family hell bent on seeking admiration of those around them, and the Paris we see through his eyes is certainly different to the one to which his parents belong. The plot is pacy; the characters wonderfully imagined, and the twist towards the latter end of the tale delivers to Paul the stark realisation that not everything in life can be explained or excused.

Atmospheric, evocative, and beautifully told, I Love You Too Much is a coming of age story about a boy sitting on the outskirts of his own life that too, is a poignant and powerful story about Paris. A stunning debut that absolutely blew me away, I will wonder about the book and its characters, for many months to come.

About I Love You Too Much

I knew I was in Paris, I knew that was the Seine beneath me, the sky above, but when I looked around for help, the grand apartment buildings of the Quai Voltaire stared back at me, indifferent.

In the sixth arrondissement everything is perfect and everyone is lonely. This is the Paris of thirteen-year-old Paul. Shy and unloved, he quietly observes the lives of the self-involved grown-ups around him: his glamorous maman Séverine, her young musician lover Gabriel and his fitness-obsessed papa Philippe. Always overlooked, it’s only a matter of time before Paul sees something that he’s not supposed to see . . .

Seeking solace in his unlikely friendship with tear-away classmate Scarlett and the sweet confections from the elegant neighbourhood patisseries, Paul yearns for unconditional love. But what will he do if he can’t find it?

Alicia Drake evokes contemporary Parisian life with the subtlety of a latter-day Françoise Sagan, and she captures in Paul the pains of adolescence as poignantly as Salinger’s Holden Caulfield. I Love You Too Much is a novel of extraordinary intelligence and heart, a devastating coming-of-age story told from the sidelines of Parisian perfection.

Alicia Drake is a writer. She was educated at Cambridge University, and she recently returned to the United Kingdom after residing and working in Paris for the past eighteen years. I Love You Too Much is her first novel.