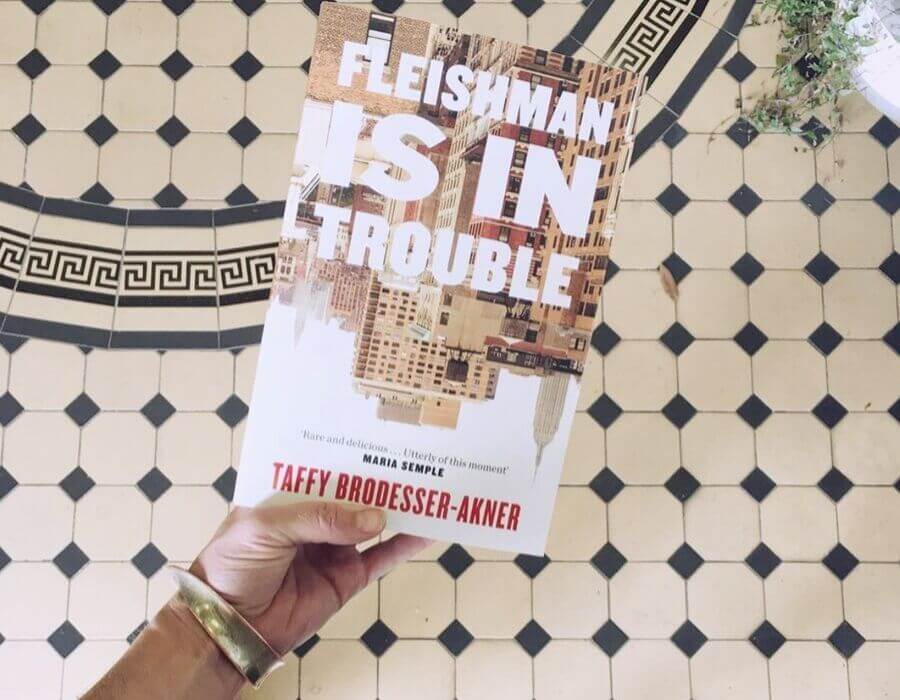 Whenever tasked with the choice of picking our next book for The Bondi Literary Salon, myself and Jane – owner of Gertrude and Alice – are often faced with the dilemma of having too many books to choose from. It has been known to take us days – if not weeks – to land on a novel, and we spend many-an-hour debating everything from whether to choose a classic or contemporary tome; a male or female author; a beloved book or an unknown debut. Selecting our literary pick for October was no different, and after narrowing it down to The Heart’s Invisible Furies by John Boyn, and Fleishman is in Trouble by Taffy Brodesser-Akner, yet still unable to make any sort of educated decision, and having just finished the 700-page strong The Goldfinch, we opted for the book with the least amount of pages, and so Fleishman is in Trouble was our winner.

Lauded by India Knight as ‘book of the summer’; cited by Dolly Alderton as a ‘trojan-horse’ of a novel, I came to Taffy Brodesser-Akner’s debut with rather high expectations, and suffice it to say I was not disappointed.

A page-turner of the very best sort, Fleishman is in Trouble is a smart read that deals with success and gender, marriage and divorce, and friendship and failure; alongside the currently of a dating app that underpins much of the plot. When the story opens, we meet Dr. Toby Fleishman – recently separated from his wife, Rachel, a workaholic talent agent. They have 2 kids, an 11-year old, Hannah, and 9-year old, Solly. In the midst of their divorce, Toby moves into a mediocre apartment while Rachel stays in their high-end one. In between working at the hospital, where he’s up for a promotion, and remaining a steady father to his kids, Toby dips his toe into the world of online dating; a venture he finds both alarming and alluring in equal measure.

RELATED:  Review: The Diary of a Bookseller - Shaun Bythell

When, one morning he wakes up to find his kids at his place — Rachel dropped them off while Toby was sleeping – he is put out, but not worried. And yet, as the minutes seep into hours and the hours melt in to days, with still no sign of Rachel, his anger makes way for concern as Toby realizes: he’s in trouble.

Written with keen powers of observation, mordant wit and subversive humour, Fleishman is in Trouble delightfully and incisively deconstructs marriage at middle age, showing the incompatibility of relationships that many of us find ourselves in. With an often unreliable narrator, and a sometimes unlikeable cast, Brodesser-Akner has delivered with her debut a brilliantly unputdownable read.

About Fleishman is in Trouble

Recently separated Toby Fleishman is suddenly, somehow–and at age forty-one, short as ever–surrounded by women who want him: women who are self-actualized, women who are smart and interesting, women who don’t mind his height, women who are eager to take him for a test drive with just the swipe of an app. Toby doesn’t mind being used in this way; it’s a welcome change from the thirteen years he spent as a married man, the thirteen years of emotional neglect and contempt he’s just endured. Anthropologically speaking, it’s like nothing he ever experienced before, particularly back in the 1990s, when he first began dating and became used to swimming in the murky waters of rejection.

But Toby’s new life–liver specialist by day, kids every other weekend, rabid somewhat anonymous sex at night–is interrupted when his ex-wife suddenly disappears. Either on a vision quest or a nervous breakdown, Toby doesn’t know–she won’t answer his texts or calls.

RELATED:  I Feel Bad About My Neck Book Review

Is Toby’s ex just angry, like always? Is she punishing him, yet again, for not being the bread winner she was? As he desperately searches for her while juggling his job and parenting their two unraveling children, Toby is forced to reckon with the real reasons his marriage fell apart, and to ask if the story he has been telling himself all this time is true.

Taffy Brodesser-Akner is a staff writer at the New York Times Magazine. Prior to that, her work appeared in GQ, ESPN the Magazine, Matter, Details, Texas Monthly, Outside, Self, Cosmopolitan and many other publications. Fleishman Is In Trouble is her first novel.

2 comments on “Review: Fleishman is in Trouble – Taffy Brodesser-Akner”