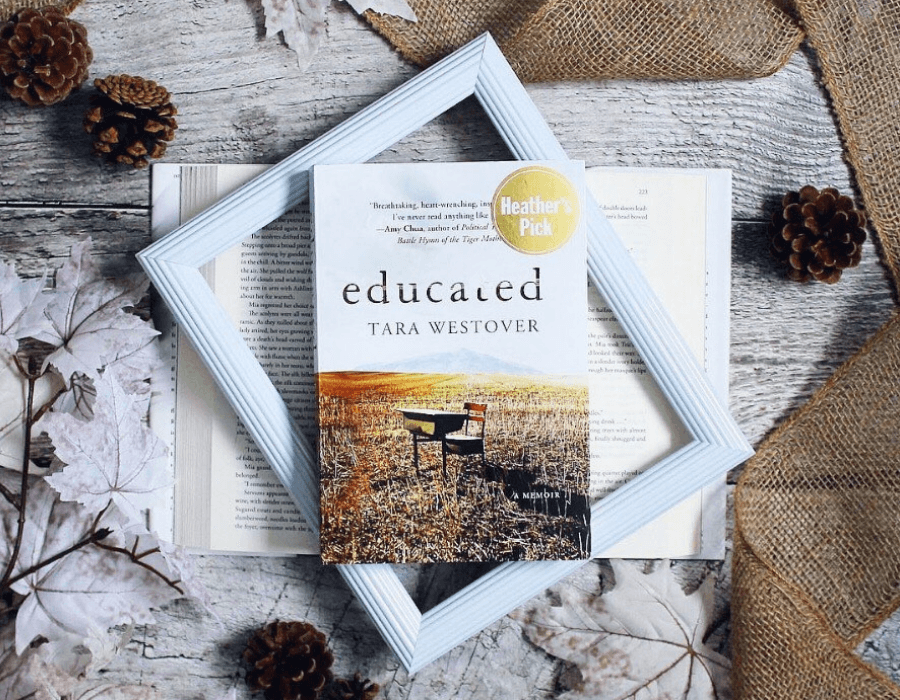 Prior to the start of the new year, I wanted to set myself a reading goal for 2019. Ever since I finished my challenge to finish the BBC Big Read, I’ve missed having a literary list to work my way through. I initially toyed with the idea of trying to read 120 books in a year, before coming to the conclusion that 10 books a month might not be the most realistic of reading challenges, and so, I find myself, three days into the new year and yet to settle on both a worthy, but achievable bookish goal for 2019.

One thing I knew, however, was that I wanted to start reading in earnest as soon as the year began, so as soon as my hangover had subsided, I started Educated by Tara Westover.

Whether or not you have a keen or avid interest in books, it would have been almost impossible to have avoided the hype around Westover’s captivating memoir; an international bestseller, it’s been lauded by the likes of both Barack Obama and Bill Gates, and it too has been featured on the pages of Vanity Fair and Vogue. It was after listening to an interview with Westover on Elizabeth Day’s popular podcast How To Fail that I finally decided to read it.

A balanced and – by all accounts – brave, memoir of a dysfunctional family life in Idaho, Educated tells the story of Westover’s upbringing by fanatical Mormon parents, who thought the end of the word was nigh, and rejected mainstream education for the loosest sort of home-schooling; and traditional medicine for herbs. While her family was dominated by a father whose world view is derived from an extreme version of the Mormon faith, it too was affected by the violence and views of older brother Shawn, who frequently committed vulgar acts of strength and savagery over each and every one of his siblings.

Despite a childhood that was littered with many a brutal accident among the family members who worked on her father’s farm,  Westover immersed herself into college life and contrived to turn her life around before ending up as a scholar in both Cambridge and Oxford.

Such a feat, however, was not without its struggles, and there were many and varied obstacles that Westover fought to overcome; from socialising with peers who drunk coke and shopped on the Sabbath (both of which she’d been brought up to believe were unholy sins) to a final and heartbreaking decision of whether to choose her newfound education or her family.

A compelling and captivating book that will open its reader’s eyes to a world beyond the bounds of anything they’ve read before. Educated is a story of conflicting beliefs, the capacity of memory, familial betrayal and, ultimately, the power of education.

An unforgettable memoir in the tradition of The Glass Castle about a young girl who, kept out of school, leaves her survivalist family and goes on to earn a PhD from Cambridge University

Tara Westover was 17 the first time she set foot in a classroom. Born to survivalists in the mountains of Idaho, she prepared for the end of the world by stockpiling home-canned peaches and sleeping with her “head-for-the-hills bag”. In the summer she stewed herbs for her mother, a midwife and healer, and in the winter she salvaged in her father’s junkyard.

Her father forbade hospitals, so Tara never saw a doctor or nurse. Gashes and concussions, even burns from explosions, were all treated at home with herbalism. The family was so isolated from mainstream society that there was no one to ensure the children received an education and no one to intervene when one of Tara’s older brothers became violent.

Then, lacking any formal education, Tara began to educate herself. She taught herself enough mathematics and grammar to be admitted to Brigham Young University, where she studied history, learning for the first time about important world events like the Holocaust and the civil rights movement. Her quest for knowledge transformed her, taking her over oceans and across continents, to Harvard and to Cambridge. Only then would she wonder if she’d traveled too far, if there was still a way home.

Educated is an account of the struggle for self-invention. It is a tale of fierce family loyalty and of the grief that comes with severing the closest of ties. With the acute insight that distinguishes all great writers, Westover has crafted a universal coming-of-age story that gets to the heart of what an education is and what it offers: the perspective to see one’s life through new eyes and the will to change it.

Tara Westover is an American author living in the UK. Born in Idaho to a father opposed to public education, she never attended school. She spent her days working in her father’s junkyard or stewing herbs for her mother, a self-taught herbalist and midwife. She was seventeen the first time she set foot in a classroom, and after that first taste, she pursued learning for the next decade. She received a BA from Brigham Young University in 2008 and was subsequently awarded a Gates Cambridge Scholarship. She earned an MPhil from Trinity College, Cambridge in 2009, and in 2010 was a visiting fellow at Harvard University. She returned to Cambridge, where she was awarded a PhD in history in 2014.