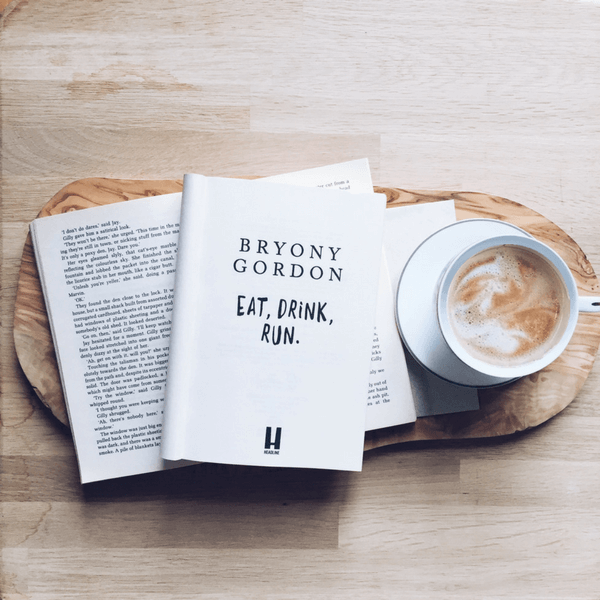 I’ve been a big fan of Bryony Gordon ever since I used to read her weekly column in The Sunday Telegraph’s Stella magazine. I laughed my way through her first memoir on her chaotic twenties – The Wrong Knickers – and adored her second memoir – Mad Girl; an account of living with mental illness for much of her life. Knowing a number of people who suffer from depression, it’s a cause close to my heart, and when I met her – albeit briefly – at one of her Mad Girl book signings, I admired how open and honest she was about her dealings with depression, anxiety and OCD, and it was great seeing the audience (myself included) speaking about their own experiences.

And so it was that as soon as I discovered that she’d written a new memoir, I couldn’t wait to read it; that its release would come shortly after my visit to London was a happy coincidence, and as soon as I arrived at in grey and gloomy Berkshire, I lit the fire, poured myself a vat of tea and began Eat, Drink, Run: How I Got Fit Without Going Too Mad.

Ultimately a tale about how Gordon found herself running a marathon despite not being a runner, it too is a story about overcoming obstacles, facing up to the limitations we place on ourself and Gordon’s unlikely friendship with the wonderful Prince Harry.

Having run the London Marathon myself four years ago for mental health charity MIND, much of Gordon’s journey resonated with me; I’ve never seen – nor called – myself a runner, but I grew to love the post-run highs I would get from the long and laborious miles I would cover in the lead up to the marathon, and I loved Eat, Drink, Run’s hilarious depictions of what marathon training is really like – the highs, the lows, and everything in between.

Gordon gives her readers a witty and wonderful insight into everything that was going on alongside her training; from the Mental Health Mates walks that she launched one drizzly Valentine’s Day, to the luxury bootcamp she visited in Ibiza to prepare her for the marathon, to the readers who reached out in the wake of Mad Girl’s publication, to her developing friendship with everyone’s favourite royal.

One of the best things about Eat, Drink, Run is that you feel like you’re reading about a friend, and while the subject matters Gordon covers are serious and, at times, rather sad, you finish it feeling hopeful for the future of everyone dealing with mental health issues.

An important, inspiring and heart-warming read about the power of self-belief, pushing our boundaries and mind over matter, I defy anyone to read Eat, Drink, Run without wanting to run a marathon themselves.

Buy Eat, Drink, Run by Bryony Gordon on Amazon or from Waterstones.

Byrony Gordon is a journalist, marathon runner and mental health campaigner. In the 18 years that she has worked for the Telegraph, Bryony Gordon has become one of the paper’s best-loved writers. She is the author of the bestselling The Wrong Knickers plus The Sunday Times Number One bestseller Mad Girl which was nominated for a British Book Award. Her weekly column in the Sunday Telegraph has won her an army of fans who have followed her journey from single girl about town to – finally! – settled mum. Bryony is now 37 and lives in Nappy Valley (Clapham) with her daughter Edie and her husband, a financial journalist. The last sentence is one she never thought she would see written down on paper.

Bryony Gordon was not a runner. A loafer, a dawdler, a drinker, a smoker, yes. A runner, no. Yet somehow, as she began to recover from the emotional rollercoaster of laying her life bare in her mental health memoir MAD GIRL, she started to realise that getting outside, moving her body and talking to others for whom life was also an occasional challenge, might actually help her. Going for a run might not banish her sadness but at least it might show it that she was damn well trying to beat it, which is sometimes half the battle. As she began to run further she started to see the limitations she had imposed on her life more clearly. Why couldn’t she be a runner? Or a bungee jumper? Or a deep sea diver? Maybe rather than sitting on the sofa watching the world go by, fulfilling your dreams was just about standing up and taking that first step. Maybe you can do it too.

In April 2017, less than a year after she had weighed herself at over 16 stone but stepped off the scales and started training anyway, Bryony Gordon ran all 26 and 3/4 miles of the London Marathon. During this time she formed an unlikely bond with the royals, and even managed to convince one of them to speak openly in public for the first time about their own mental health. Here, in her new typically funny and hugely inspiring memoir, she shows us how extraordinary things can happen to us all, no matter what life throws at us, if we’re just willing to keep going.