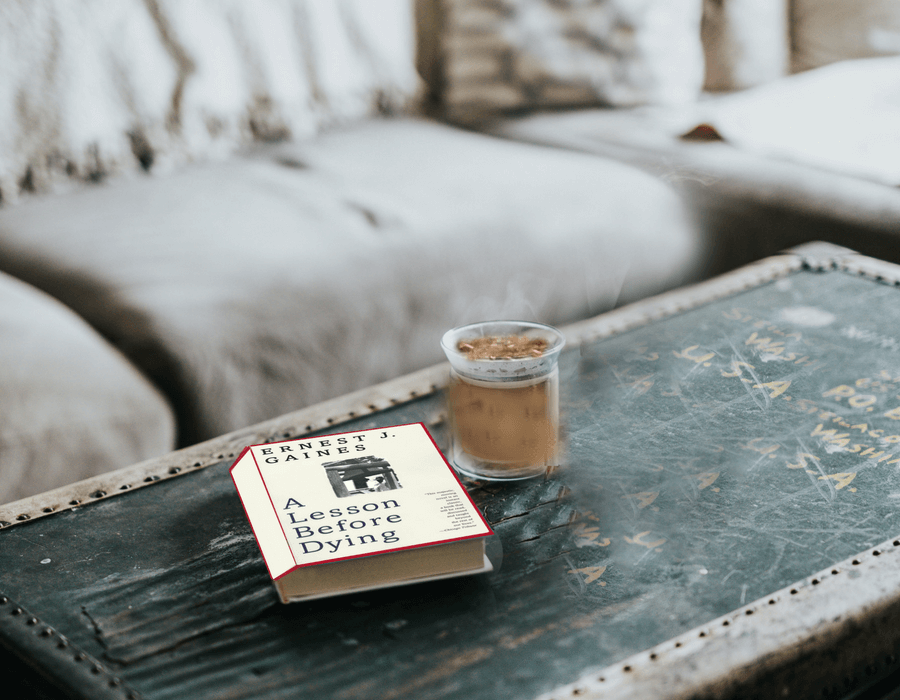 A while ago, I put the following question to my Facebook followers: if you were only able to recommend one book, that you think everyone should read at least once in their lifetime, what would it be and why? I was subsequently recommended A Lesson Before Dying by Ernest J Gaines by my friend Monika, who later lent me a copy. And so, while in the midst of a loosely imposed book-buying ban, I sought it from my groaning bookshelves to read.

While in my final year of university, I chose to do my dissertation on the depiction of men in black women’s literature and devoured the likes of Alice Walker and Toni Morrison in their droves, however, when I stopped to consider it, I can’t recall a single black male author whose work I’ve read prior to A Lesson Before Dying.

A heartbreaking, timely and topical book – despite being set seventy years ago – A Lesson Before Dying is loosely based on the true story of Willie Francis, a young Black man sentenced to death by the electric chair twice in Louisiana, in 1945 and 1947 – which answers the common question: is A Lesson Before Dying a true story? It tells the story of a young, black man, Jefferson, who is accused of murder for being in the wrong place at the wrong time, after a white man is murdered and the two perpetrators shot dead. In a desperate bid to acquit him, his lawyers compare to him to a hog, insisting that the young man isn’t worth killing; however, this is unsuccessful and Jefferson is subsequently sentenced to death. Jefferson’s godmother feels the importance of Jefferson dying as a “man” not as a “hog”, and so she enlists the narrator, school teacher Grant, to teach Jefferson how to be a man so he can die with dignity.

The only black man in the community, Grant is under an immense amount of pressure from both Jefferson’s family and the wider community to help the young man in the days before his death. And while Grant has little faith in his value as a teacher, he soon forms a bond with Jefferson and the quest to hep him die with dignity becomes more than just a favour to the young boy’s Nannan.

The outcome is known from page one, yet the journey is a heart-rending one, and this account of a school teacher’s attempt to bring dignity to the last days of a condemned man in 1940’s Louisiana is moving, raw and brimming with sadness, though if you look closely enough there are moments of redemption to be found. An incredibly powerful novel that peels back the curtain of injustice, laying bare human pride and prejudice, A Lesson Before Dying is about how one person can be the fertile ground for positive change.

About A Lesson Before Dying

A Lesson Before Dying is set in a small Cajun community in the late 1940s. Jefferson, a young black man, is an unwitting party to a liquor store shoot out in which three men are killed; the only survivor, he is convicted of murder and sentenced to death. Grant Wiggins, who left his hometown for the university, has returned to the plantation school to teach. As he struggles with his decision whether to stay or escape to another state, his aunt and Jefferson’s godmother persuade him to visit Jefferson in his cell and impart his learning and his pride to Jefferson before his death. In the end, the two men forge a bond as they both come to understand the simple heroism of resisting and defying the expected. Ernest J. Gaines brings to this novel the same rich sense of place, the same deep understanding of the human psyche, and the same compassion for a people and their struggle that have informed his previous, highly praised works of fiction.

About Ernest J Gaines, author of A Lesson Before Dying

Born to a sharecropping family, Ernest Gaines was picking cotton in the fields by age nine and only attended school five or six months a year. When he was fifteen, he moved to California to join his mother who had relocated during World War II, and began writing. He attended San Francisco State University, served in the army, and won a writing fellowship to Stanford University. Gaines has been a MacArthur Foundation fellow, inducted into the American Academy of Arts and Letters, awarded the National Humanities Medal, and inducted into the French Order of Arts and Letters as a Chevalier. He and his wife split their time between Louisiana and San Francisco.